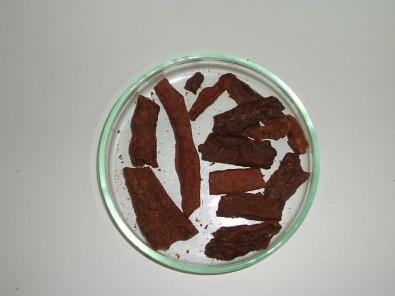 Brazilian red propolis found in beehives along the coast and mangroves in the Northeast region contains two substances with anti-cancer properties. In laboratory tests, they considerably reduced the proliferation of ovarian, breast, and brain cancer cells.

In a study published in the Journal of Natural Products, researchers at the Universities of São Paulo (USP) and Campinas (UNICAMP) report their discovery of the two anti-cancer substances as well as six novel polyphenols with structures previously unknown to science. Polyphenols are beneficial natural compounds with anti-oxidant properties. They include flavonoids and tannins, and can be found in plants, cereals, and wine.

"Two of the eight substances isolated for the first time from red propolis displayed cytotoxic properties in ovarian cancer, breast cancer, and glioma cells. We performed in vitro tests on these three types of tumor because they are resistant to many different drugs and hence hard to treat. The cells in question have a well-known mechanism that overexpresses a protein responsible for barring drugs. This is why they're drug-resistant. Our tests showed that the substances in red propolis circumvented the mechanism, showing their potential to reduce tumors," said Roberto Berlinck, a professor in the University of São Paulo's São Carlos Institute of Chemistry (IQSC-USP) and a member of the steering committee of the São Paulo Research Foundation - FAPESP Research Program on Biodiversity Characterization, Conservation, Restoration and Sustainable Use (BIOTA-FAPESP).

The discoveries resulted from a study within the scope of BIOTA-FAPESP, coordinated by Berlinck, and from a Thematic Project coordinated by Ronaldo Pilli.

According to Berlinck, red propolis polyphenols are a novel class of anti-cancer compounds that inhibit tumor growth and induce tumor cell death. "In one of our tests they outperformed a well-known chemotherapy drug [doxorubicin]," he said.

Natural products are among the main sources of new cancer drugs. Hence the importance of bioprospecting studies such as this one, demonstrating the beneficial effects of the substances concerned. Previous research described the bactericidal, anti-fungal, anti-inflammatory, and immunomodulatory properties of red propolis.

"Bees produce propolis to protect the hive, so it's no accident that the resin is bactericidal and anti-fungal," Berlinck said. "This had been reported previously by researchers who analyzed raw red propolis. In our study, we proved the anti-cancer effects of specific substances isolated from red propolis."

Red propolis is rarer than green, yellow, or brown propolis. Brazil is one of the world's largest producers of propolis. Red propolis is found in several states of Northeast Brazil. In Alagoas, for example, it is produced by honeybees (Apis mellifera) that feed on the reddish resin exuded by the coin vine Dalbergia ecastaphyllum.

"We plan to investigate how the bees process this tree resin," Berlinck said. "Do they modify it to make propolis or use it as is?"

However, he added, polyphenols are not considered promising candidates for drug development. "Polyphenols, unfortunately, bind to all sorts of proteins, whereas a drug needs to target a specific protein," he said. "This may be why red propolis is active in so many ways. It can influence several different systems."

- This press release was originally published on the Agência FAPESP website