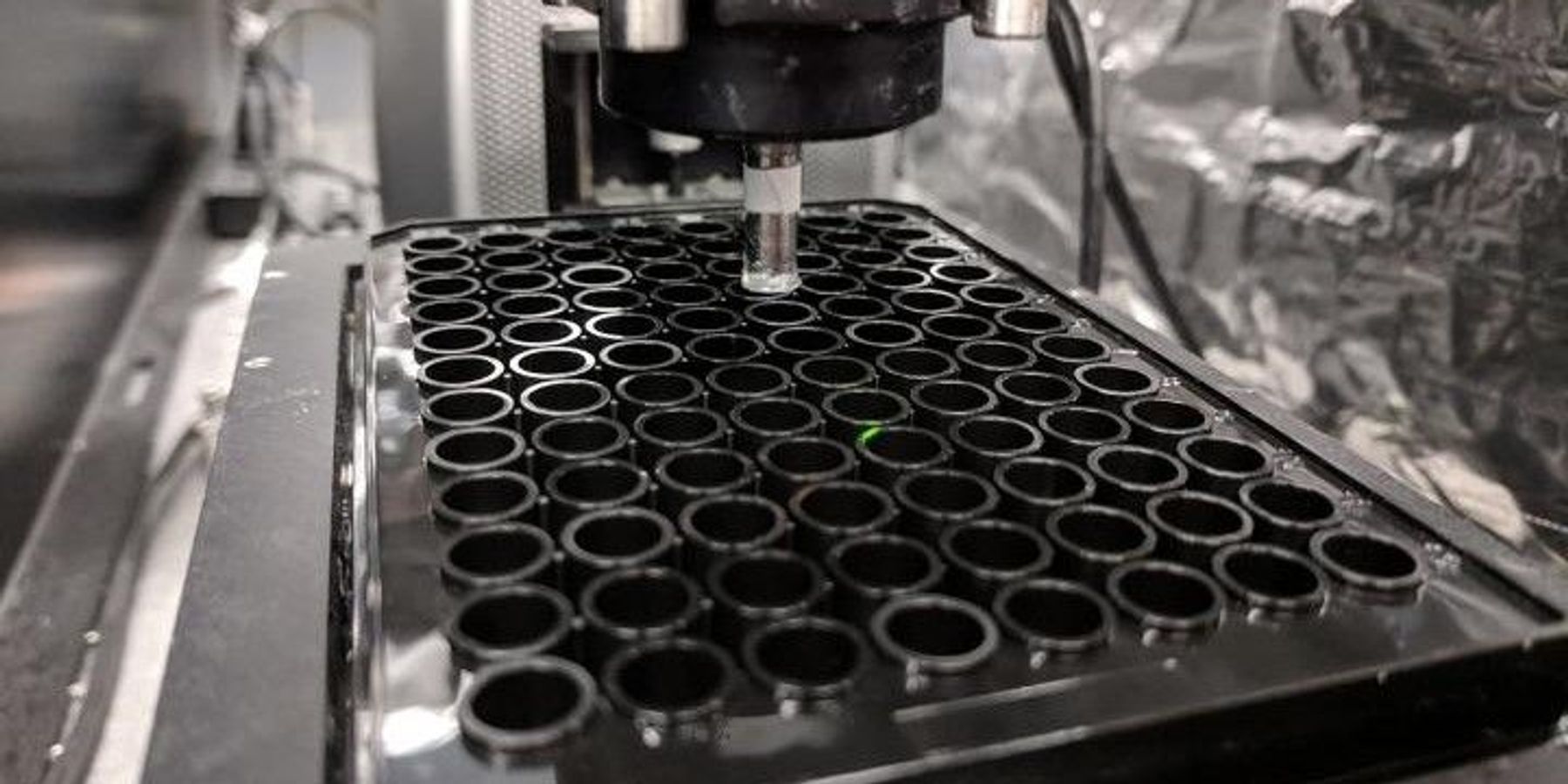 The process for a pharmaceutical company to develop a new drug can take up to 15 years and cost up to $US2.6 billion. It generally begins with screening tens of thousands of drug candidates in test tubes. Successful candidates then get tested in animals, and any that pass this stage move on to clinical trials. With any luck, one of these candidates will make it into the market as an US Food and Drug Administration approved drug.

The high-throughput 3D bioprinting technology developed at UC San Diego could accelerate the first steps of this process. It would enable drug developers to rapidly build up large quantities of human tissues on which they could test and weed out drug candidates much earlier.

"With human tissues, you can get better data—real human data—on how a drug will work," said Shaochen Chen, a professor of nanoengineering at the UC San Diego Jacobs School of Engineering. "Our technology can create these tissues with high-throughput capability, high reproducibility, and high precision. This could really help the pharmaceutical industry quickly identify and focus on the most promising drugs."

The work was published in the journal Biofabrication.

The researchers note that while their technology might not eliminate animal testing, it could minimize failures encountered during that stage.

"What we are developing here are complex 3D cell culture systems that will more closely mimic actual human tissues, and that can hopefully improve the success rate of drug development," said Shangting You, a postdoctoral researcher in Chen's lab and co-first author of the study.

The technology rivals other 3D bioprinting methods not only in terms of resolution—it prints lifelike structures with intricate, microscopic features, such as human liver cancer tissues containing blood vessel networks—but also speed. Printing one of these tissue samples takes about 10 seconds with Chen's technology; printing the same sample would take hours with traditional methods. Also, it has the added benefit of automatically printing samples directly in industrial well plates. This means that samples no longer have to be manually transferred one at a time from the printing platform to the well plates for screening.

"When you're scaling this up to a 96-well plate, you're talking about a world of difference in time savings—at least 96 hours using a traditional method plus sample transfer time, versus around 30 minutes total with our technology," said Chen.

Reproducibility is another key feature of this work. The tissues that Chen's technology produces are highly organized structures, so they can be easily replicated for industrial scale screening. It's a different approach than growing organoids for drug screening, explained Chen. "With organoids, you're mixing different types of cells and letting them to self-organize to form a 3D structure that is not well controlled and can vary from one experiment to another. Thus, they are not reproducible for the same property, structure, and function. But with our 3D bioprinting approach, we can specify exactly where to print different cell types, the amounts and the micro-architecture."

To print their tissue samples, the researchers first design 3D models of biological structures on a computer. These designs can even come from medical scans, so they can be personalized for a patient's tissues. The computer then slices the model into 2D snapshots and transfers them to millions of microscopic-sized mirrors. Each mirror is digitally controlled to project patterns of violet light—405 nanometers in wavelength, which is safe for cells—in the form of these snapshots. The light patterns are shined onto a solution containing live cell cultures and light-sensitive polymers that solidify upon exposure to light. The structure is rapidly printed one layer at a time in a continuous fashion, creating a 3D solid polymer scaffold encapsulating live cells that will grow and become biological tissue.

The digitally controlled micromirror array is key to the printer's high speed. Because it projects entire 2D patterns onto the substrate as it prints layer by layer, it produces 3D structures much faster than other printing methods, which scans each layer line by line using either a nozzle or laser.

"An analogy would be comparing the difference between drawing a shape using a pencil versus a stamp," said Henry Hwang, a nanoengineering PhD student in Chen's lab who is also co-first author of the study. "With a pencil, you'd have to draw every single line until you complete the shape. But with a stamp, you mark that entire shape all at once. That's what the digital micromirror device does in our technology. It's orders of magnitude difference in speed."

This recent work builds on the 3D bioprinting technology that Chen's team invented in 2013. It started out as a platform for creating living biological tissues for regenerative medicine. Past projects include 3D printing liver tissues, blood vessel networks, heart tissues, and spinal cord implants, to name a few. In recent years, Chen's lab has expanded the use of their technology to print coral-inspired structures that marine scientists can use for studying algae growth and for aiding coral reef restoration projects.

Now, the researchers have automated the technology in order to do high-throughput tissue printing. Allegro 3D, Inc., a UC San Diego spin-off company co-founded by Chen and a nanoengineering PhD alumnus from his lab, Wei Zhu, has licensed the technology and recently launched a commercial product.