This study, the first to visualize this process in lymph nodes, could help scientists better understand how to turn up or down the immune system's activity to treat autoimmune diseases, infections or even cancer. The results were published this week in the Proceedings of the National Academy of Sciences. 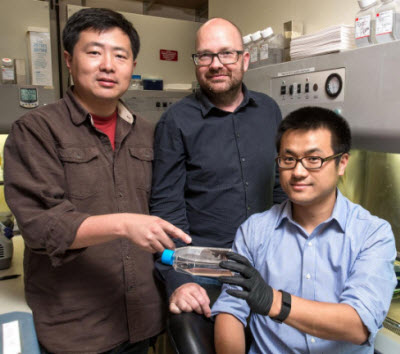 T cells are activated when receptors embedded in their outer membrane bind to other immune cells that have digested an antigen, such as a virus, bacteria or cancer cell. In turn, the activated T cells switch on cellular pathways that help the body both actively seek out and destroy the antigen and remember it for the future. In the past, by looking at T-cell receptors embedded in isolated cells under the microscope, researchers discovered that the receptors are arranged in clusters—called protein islands—that merge when the cells are activated.

Lillemeier wanted more detail on how the receptors are arranged in tissue and how that arrangement might change when the T cells are activated in living hosts. The team used a super-resolution microscope developed in the laboratory of co-senior author Hu Cang, assistant professor at Salk's Waitt Advanced Biophotonics Center and holder of the Frederick B. Rentschler Developmental Chair. This microscopy approach, called light-sheet direct stochastic optical reconstruction microscopy (dSTORM), let the researchers watch T cell receptors in the membranes of T cells in mouse lymph nodes at a resolution of approximately 50 nanometers.

The new imagery confirmed the previous observation that protein islands of T cell receptors merge into larger "microclusters" when T cells are activated. But it also showed that, before cells are activated, the protein islands are already arranged in groups—dubbed "territories" by Lillemeier's team. "The pre-organization on the molecular level basically turns the T cell into a loaded gun," says Lillemeier.

The organization of surface receptors enables T cells to launch fast and effective immune response against antigens. Understanding how the molecular organization mediates the sensitivity of T cell responses could help researchers make the immune system more or less sensitive. In the case of autoimmune diseases, clinicians would like to turn down the immune system's activity, while turning up the activity could help fight infections or cancers.

The research could also have implications for understanding other receptors in the body, which have a wide range of functions both within and outside the immune system. "We think that most receptors on the surfaces of cells are organized like this," says Ying Hu, first author and postdoctoral researcher at the Salk Institute.

About the Salk Institute for Biological Studies:

Every cure has a starting point. The Salk Institute embodies Jonas Salk's mission to dare to make dreams into reality. Its internationally renowned and award-winning scientists explore the very foundations of life, seeking new understandings in neuroscience, genetics, immunology and more. The Institute is an independent nonprofit organization and architectural landmark: small by choice, intimate by nature and fearless in the face of any challenge. Be it cancer or Alzheimer's, aging or diabetes, Salk is where cures begin. Learn more at: salk.edu.