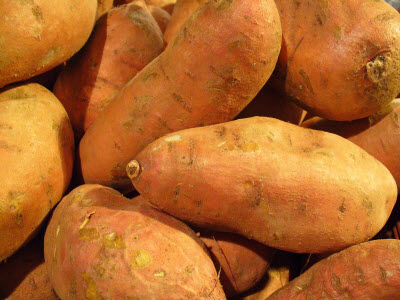 Researchers have found that a new variety of sweet potato has more potential for both biofuels and food than current table varieties like these.Photo credit: Llez, Wikimedia CommonsNewswise — GAINESVILLE, Fla. — As some Florida growers try to find new crops and the demand for biofuel stock increases globally, University of Florida Institute of Food and Agricultural Sciences researchers have found that sweet potato vines, usually thrown out during harvest, can serve well as livestock feed while the roots are an ideal source for biofuel.

This could be a key finding for the agriculture industry in Florida and to biofuel needs worldwide, said post-doctoral researcher Wendy Mussoline.

“The agriculture industry in Florida is looking to find new, viable crops to replace the citrus groves that have been diminished by the greening disease,” Mussoline said. “Potato farmers are also trying to find new crops that offer both biofuel alternatives as well as food and/or animal feed opportunities. They are conducting field trials on several varieties of sweet potatoes to determine if they are an economically viable crop that they can market.”

According to a newly published study by professor Ann Wilkie and Mussoline, an industrial sweet potato variety (CX-1) may do the trick.

Currently, 99 percent of the ethanol produced in the United States comes from corn or sorghum, the study says. But scientists and business interests are considering highly productive alternatives such as sweet potatoes for biofuel. Although China produces 81 percent of the world’s sweet potatoes, U.S. sweet potato production reached a record high of 3.2 billion pounds in 2014, according to the U.S. Department of Agriculture.

Wilkie and Mussoline, both researchers in the UF/IFAS soil and water sciences department, found that CX-1 is a superior choice as a dual-purpose crop than the so-called “table” varieties—which people would normally eat—known as Beauregard and Hernandez. They determined this by putting CX-1, Beauregard and Hernandez, through multiple tests in the field and laboratory in Gainesville.

The study demonstrated CX-1’s value as animal feed and promotes the industrial sweet potato crop as a dual-purpose crop that could be used for both fuel ethanol—from the starchy roots—and nutritious animal feed—from the vines.

“Although this would be a ‘new’ feedstock for biofuels in the U.S., sweet potato is currently used in other countries; for example, China and Brazil, use it as a biofuel feedstock,” Mussoline said.

“The sweet potato is a high-yielding crop suited to tropical and subtropical climates that requires minimal fertilization and irrigation, and the CX-1 industrial cultivar offers superior potential for feed and fuel,” Wilkie said.

The research was sponsored by the Florida Department of Agriculture and Consumer Services Office of Energy.

The new study is published online in the Journal of the Science of Food and Agriculture, http://bit.ly/29RLhpS.