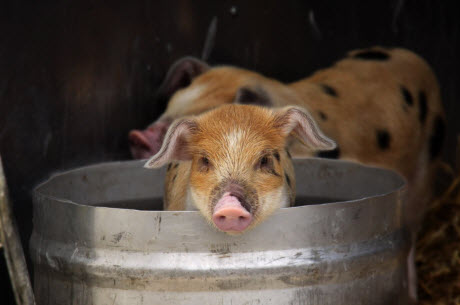 Kansas State University researchers are discovering more about how adding amino acids to swine feed helps the animal grow safely while reducing producer's costs and a farm's environmental impact.Photo credit: Ben Salter, Wikimedia CommonsMANHATTAN — In human nutrition, amino acids are considered the good guys. As the building blocks for protein, they are a key ingredient in improving muscle.

"It's an area that people have worked on for a lot of years and we are continuing to refine the use of amino acids in swine feed through our research program," said Mike Tokach, Kansas State University distinguished professor of animal sciences and industry.

Soybean meal and corn are good sources of amino acids for swine, Tokach said, but typically the amino acids are not in a perfect balance to meet the animals' needs. Researchers can essentially "stack" amino acids in the formulation of swine diets so that the pig receives the correct amino acid, in the right proportion, just when its body needs it.

"We don't have to use as much soybean meal or the more expensive protein sources, such as fish meal, to give the pig what it needs," Tokach said. "If we know what a pig's requirement is, we can use a different protein source and supplement with the correct amino acids."

There are millions of proteins, all made of amino acids, but there are only 20 known amino acids and just 10 that can be made by swine. The other 10 amino acids must be provided in an animal's diet.

That is good news for reducing a farm's carbon footprint. Through various trials, Kansas State University scientists and graduate students have found that feeding fewer plant proteins translates to less nitrogen and ammonia from the farm.

Related article: Livestock can Produce Food that is Better for the People and the Planet

Plus, Tokach said farmers use less water because pigs drink and urinate less when they are eating lower protein diets, further reducing pollutants. One study showed that a 1 percent reduction in dietary protein reduces ammonia emissions from swine manure slurry by 10-12 percent.

Tokach said that feeding amino acids differs based on such factors as genetics and the pig's stage of life. The university is working with swine producers and amino acid suppliers to incorporate its research findings into diets that are appropriate for U.S. herds.

The university's work with amino acids will be one topic discussed during the annual Swine Day, which is Nov. 19 in Manhattan. Nearly 400 U.S. swine producers and industry professionals typically attend the annual meeting.