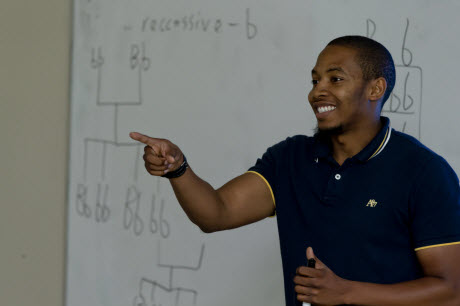 Six entering Clarkson University PhD candidates arrived in Schenectady in early July to begin their post-graduate education in a four-week Summer Institute for Graduate Teaching Assistants—a so-called “TA boot camp.” Above, Antonio Rockwell of Buffalo, NY, a bioscience & biotechnology PhD student, practices his teaching skills by giving a lesson to other TAs.Photo courtesy of Clarkson UniversityA ground-breaking pilot program, which could be a model for all of higher education, is getting its first test at Clarkson University’s Capital Region Campus in Schenectady, NY.

"This unique program is designed for the first time to truly prepare these PhD candidates for their work as teaching assistants, a standard requirement for all such students," said associate professor Catherine Snyder, chair of the Department of Education.

She believes that no other university in the country spends more than a week preparing their PhD students to serve as university-level teaching assistants. Assistant professor of STEM education Seema Rivera is developing a research project to determine the effectiveness of this summer’s first ever TA boot camp.

Rivera said virtually all existing TA preparatory programs at other universities—where they exist at all—are for as little as two days or maybe a week, and most barely spend much of that time in actual teacher training.

Assuming its success this summer with Clarkson PhD candidates, the Schenectady-based program could provide a service for many other universities who, down the road, might consider having their PhD candidates begin their education in this summer program at Clarkson’s Capital Region Campus.

“This could be a very interesting development for us,” said dean of arts and sciences Peter Turner. “Our TA boot camp could become a model for higher education on a much broader level.” It is his view that until now there has been no insistence that college-level teachers would actually get teacher training. “This could have a potentially far-reaching impact on academia,” he said.

The “boot camp” term actually came from students enrolled in a long-existing and parallel summer program created some 25 years ago to prepare master of arts in teaching degree students who plan to teach at the high school level, said Snyder.

After the merger of Union Graduate College into Clarkson University, early this year, Snyder collaborated with Turner to develop this parallel teaching assistant program for PhD candidates. The two campuses have thus integrated the PhD programs at the school’s main campus with the long established programs in education at the university’s new Schenectady campus.

“This new curriculum for the entering PhD candidates is being field tested this summer,” said Snyder. The enrollment includes students seeking advanced degrees in chemistry, biology and math. Some of the lab work and other course work in teaching is being shared with the master's degree students.

“It is noteworthy that this is really breaking new ground in giving serious education training to incoming PhD candidates,” said Turner. When the PhD candidates arrive in Potsdam in August they will have acquired very valuable skills, he said. In addition, a significant inclusion in this course work is the communication element—of particular importance since eight of the nine students are from outside the United States, and they’ll eventually be serving as teaching assistants in classes mostly dominated by undergraduate students from North America.

Overseeing the logistics of the TA program in Schenectady is a highly credentialed science department chair from Saratoga High School, Thomas Shiland. Once this summer program ends in early August, Snyder said the PhD candidates will move to Potsdam to continue the pursuit of their advanced degrees. But they’ll be arriving on campus with intensive, extensive, and highly valuable training in how to teach.