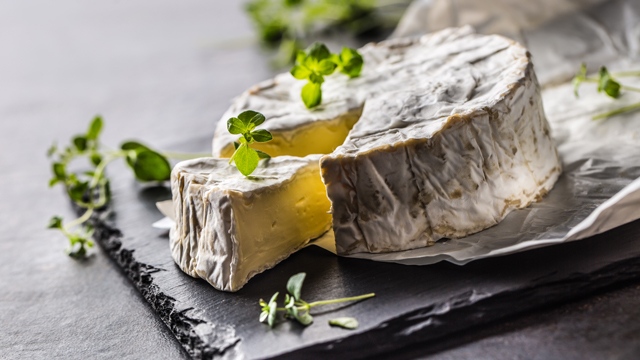 Washington, DC — October 15, 2019 — The flavors of fermented foods are heavily shaped by the fungi that grow on them, but the evolutionary origins of those fungi aren't well understood. Experimental findings published this week in mBio offer microbiologists a new view on how those molds evolve from wild strains into the domesticated ones used in food production.

In the paper, microbiologists report that wild-type Penicillium molds can evolve quickly so that after a matter of weeks these strains closely resembled their domesticated cousin, Penicillium camemberti, the mold that gives camembert cheese its distinctive flavor. The study shows how a fungus can remodel its metabolism over a short amount of time; it also demonstrates a strategy for probing the evolution of other cultures used in food, said study leader and microbiologist Dr. Benjamin Wolfe, PhD.

"In fermented foods, there's a lot of potential for microbes to evolve and change over time," said Wolfe.

Wolfe's lab at Tufts University in Medford, MA, focuses on microbial diversity in fermented foods, but he says the new experiments began with an accidental discovery. His lab had been growing and studying Penicillium commune, a bluish, wild-type fungus well-known for spoiling cheese and other foods. Wolfe likens its smell to a damp basement.

But over time, researchers noticed changes in some of the lab dishes containing the stinky mold. "Over a very short time, that funky, blue, musty-smelling fungus stopped making toxins," Wolfe said. The cultures lost their bluish hue and turned white; they smelled like fresh grass and began to look more P. camemberti. "That suggested it could really change quickly in some environments," he said.

To study that evolution in real-time, Wolfe and his collaborators collected fungal samples from a cheese cave in Vermont that had been colonized by wild strains of Penicillium molds. The researchers grew the molds in lab dishes containing cheese curds. In some dishes, the wild mold was grown alone; in others, it was grown alongside microbes that are known competitors in the fierce world of cheese colonization.

After one week, Wolfe said, the molds appeared blue-green and fuzzy—virtually unchanged—in all the experimental tests. But over time, in the dishes where the mold grew alone, its appearance changed. Within three or four weeks of serial passage, during which mold populations were transferred to new dishes containing cheese curds, 30-40 percent of the mold samples began to look more like P. camemberti. In some dishes, it grew whiter and smoother; in others, less fuzzy. (In the competitive test cases, the wild mold did not evolve as quickly or noticeably.)

In follow-up analyses, Wolfe and his team tried to identify genomic mutations that might explain the quick evolution but didn't find any obvious culprits. "It's not necessarily just genetic," Wolfe said. "There's something about growing in this cheese environment that likely flips an epigenetic switch. We don't know what triggers it, and we don't know how stable it is."

Researchers suspect that the microbes used in most fermented foods—including cheese, but also beer, wine, sake, and others—were unintentionally domesticated, and that they evolved different flavors and textures in reaction to growing in a food environment. Wolfe says his lab's study suggests that wild strains could be domesticated intentionally to produce new kinds of artisanal foods.

Starting with cheese, of course. "The fungi that are used to make American camembert are French," said Wolfe, "but maybe we can go out and find wild strains, bring them into the lab, and domesticate them. We could have a diverse new approach to making cheese in the United States."