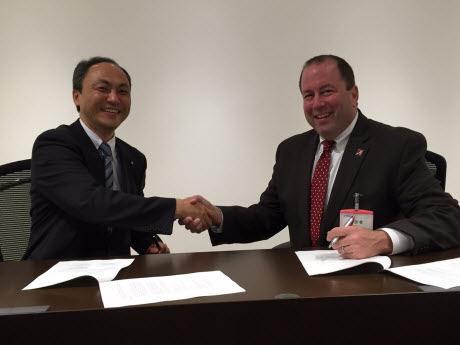 Dr. Kyung-Ku Choi, left, and Dr. Carl A. Pinkert shake hands following the signing of a new UA-TDK cooperative research agreement.Photo courtesy of the University of AlabamaThe newly signed agreement between TDK and UA’s Center for Materials for Information Technology, or MINT, will, among other things, bring TDK engineers to campus while researching long-term solutions to some of the biggest challenges faced by the industry today.

“A portion of this collaboration between TDK and UA researchers seeks an alternative to high-potential magnetic materials, known as rare-earth materials, central to sustaining the electric energy movement,” said Dr. Carl A. Pinkert, UA vice president for research and economic development. “Combining the know-how of TDK with that of our MINT researchers creates an intellectual powerhouse to tackle these significant challenges.”

“This collaboration between TDK and UA should help to better overcome the challenges in new magnetic materials development,” said Dr. Kyung-Ku Choi, general manager of TDK’s Material Development Center. “TDK believes that strong inroads have been made and pose timely opportunities in the development of both high frequency soft magnetic material and rare-earth free magnets through our collaborative efforts.”

Pinkert and Choi recently formalized the agreement at the TDK Technical Center in Ichikawa, Japan.

The agreement between TDK and UA is called the MINT-TDK Collaborative Project.  It builds on existing collaborations between these two entities and others led by Dr. Takao Suzuki, director of UA’s MINT Center.

Rare-earth materials make the most powerful and efficient magnets, and their size and reliability are well suited for electric motors that use their magnetic field as power. However, an estimated 95 percent of the world’s supply of rare earth materials is produced in China.

Price instability makes it difficult to rely on rare-earth minerals and threatens widespread adoption of many energy solutions by U.S. companies, according to the U.S. Department of Energy. And, the extraction of these rare earth minerals has created environmental concerns. So, leading scientists around the world are researching potential substitutes.

Both UA and TDK are part of a previously announced $1.6 million G8 project, led by UA’s Suzuki and involving 13 other UA researchers along with scientists in Germany, Japan and elsewhere.

The soft magnet material aspect of the collaboration focuses on ways to develop new materials for high frequency devices that further reduces size, weight and cost.

UA’s MINT Center conducts fundamental studies on materials for data storage, energy storage, sensors and other applications of new materials and technologies. The MINT Center has more than 40 faculty from seven departments at The University of Alabama. MINT is active in research and education through global professional partnerships, including industries, national laboratories and universities around the world.

TDK Corp. is a leading electronics company based in Tokyo, Japan. It was established in 1935 to commercialize ferrite, a key material in electronic and magnetic products. TDK’s portfolio includes electronic components, modules and systems marketed under the product brands TDK and EPCOS, power supplies, magnetic application products as well as energy devices, flash memory application devices, and others.

TDK focuses on demanding markets in the areas of information and communication technology and consumer, automotive and industrial electronics. The company has a network of design and manufacturing locations and sales offices in Asia, Europe and in North and South America. In fiscal 2015, TDK posted total sales of $9.0 billion in U.S. dollars and employed about 88,000 people worldwide.