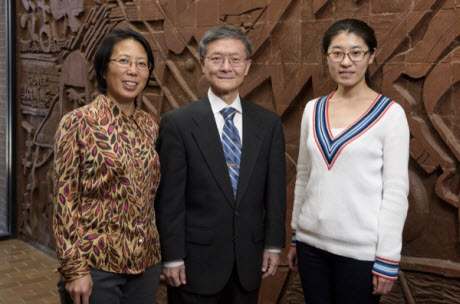 One floor up and one office over, in 204 Spencer, Liyun Wang is analyzing data on the effects of mechanical stimuli on bone.

Although the two mechanical engineering professors have worked in the same building on the UD campus for more than a decade, they never found an opportunity to collaborate.

Until last year, that is, when Chou discovered that a piece of equipment Wang uses in her bioengineering work might be valuable in his materials science research.

The collaboration proved successful, and the two are part of a team that recently reported new findings on the durability of stretchable electronic devices made with carbon nanotube fibers. Their work is documented in a paper published in the journal Carbon.

Chou explains that because of their high mechanical performance and excellent electrical conductivity, carbon nanotube (CNT) fibers have potential applications in electronic devices such as stretchable displays, transistors, photovoltaic devices, and flexible supercapacitors.

Many research efforts have been directed at evaluating the short-term performance of these materials. In addition, UD’s Yushan Yan has investigated their electrochemical durability—that is, how stable they are over repeated charge-discharge cycles.

But Chou wanted to know more about their mechanical durability—would their unique combination of strength and flexibility hold up over thousands of stretch-release cycles?

It turned out that Wang had the right tool for the job: a Bose ElectroForce TestBench LM0 system, which features a frictionless moving-magnet design that is particularly suited for cyclical fatigue testing.

“We use the facility to test how daily cyclical loading stimulates bone growth,” Wang says. “The system has also been used to test artificial joints, where durability is critical—we need to know how long bio-implants will survive in the body under the stresses and strains of typical daily use.”

Chou was grateful to learn that this novel capability was “right upstairs,” and, with the support of Wang’s research group, he and his team used the apparatus to test supercapacitors made with CNT fibers prepared two different ways.

After 10,000 stretch-release cycles, the performance of one type decreased slightly, while the behavior of the other exhibited a small improvement—results that bode well for the use of these novel materials in supercapacitors, which offer several advantages over common batteries for energy storage.

Through measurement of electromechanical and electrochemical behaviors during real-time cyclical testing and real-time observation using scanning electron microscopy, the team successfully revealed the evolution of microscopic damage in CNT fibers. The mechanisms identified in their study should help the field move forward to achieve even better performance.

“We are continuing to learn about the multifunctionality of CNT fibers,” Chou says. “Their high specific strength, stiffness, electrical and thermal conductivity, and extreme flexibility have brought about a new class of stretchable electronic devices.”

“The unique combination of outstanding electrochemical performance and stretchability of CNT-fiber-based supercapacitors greatly facilitates their integration with wearable, miniaturized and portable electronic devices.”

About the research team

In addition to the University of Delaware, the team represents the School of Chemical Engineering and Technology at the Harbin Institute of Technology and the Suzhou Institute of Nano-Tech and Nano-Bionics in the Peoples Republic of China and the Composites Research Center at the Korean Institute of Materials.