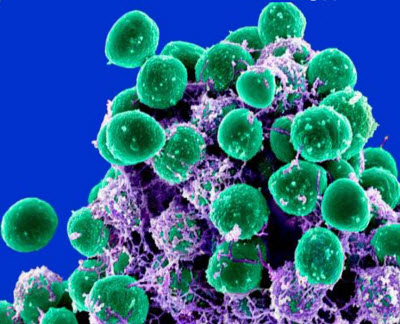 Staphylococcus epidermis is increasingly emerging as a cause of multi-resistant hospital-acquired infections. The ability to quickly judge whether a bacteria is resistant to antibiotics could make a major difference in a patient's treatment.Photo credit: Shannon Hilton and Paul JonesBacteria’s ability to become resistant to antibiotics is a growing issue in health care: Resistant strains result in prolonged illnesses and higher mortality rates.

One way to combat this is to determine bacteria’s antibiotic resistance in a given patient, but that often takes days — and time is crucial in treatment. Arizona State University scientists have developed a technique that can sort antibiotic-resistant from “susceptible” bacteria, and it happens in a matter of minutes.

The microfluidic technology, developed in the lab of professor Mark Hayes in the Department of Chemistry and Biochemistry at Arizona State University, uses microscale electric field gradients, acting on extremely small samples, to tell the difference between the two strains (antibiotic-resistant and antibiotic-susceptible) ofStaphylococcus epidermidis.

It’s part of a changing approach to bacteria.

After a multi-decade “sledgehammer” approach, focused on killing all bacteria via soaps, detergents, antibiotics and hand sanitizers, scientists are now moving to subtler methods based on a better understanding of the complex bacterial system in our bodies and in the world around us.

The average human has more than 100 trillion microbes in and on his/her body. That’s nine times the number of cells that make up the entire human body. Armies of bacteria sneak into our bodies the moment we are born, uninvited but necessary guests. We can’t do without them.

Bacteria have, by evolution, the ability to rapidly adopt beneficial genomic alterations. One type of adaptation is resistance to antibiotics, and this is becoming a huge and worldwide problem.

National summary data from the Centers for Disease Control and Prevention indicate that each year in the United States, at least 2 million people acquire serious infections with antibiotic-resistant strains of bacteria. At least 23,000 people die as a direct result of these infections, and many more die from related complications.

It is not just humans that are threatened by this growing adaptation. A study reported in Science just last week finds a wide variety of African wildlife harbor drug-resistant microbes similar to those found in humans living in nearby villages.

Antibiotic-resistance adaptation is a natural phenomenon. When an antibiotic is used, bacteria that can resist that antibiotic obviously have a greater chance of survival than those that are susceptible, and so the resistance passes to the next generation.

Some of the most notorious antibiotic-resistant strains and species belong to the genus Staphylococcus. They are typically classified as pathogenic or non-pathogenic based on production of the enzyme coagulase. Staphylococcus epidermidis does not produce coagulase, and it is generally less invasive than Staphylococcus aureus. In fact, it is a normal and commensal resident of human skin.

This is where the project began, as a collaboration with orthopedic surgeon Dr. Alex McLaren and his team member and bioengineer Dr. Ryan McLemore of Banner Good Samaritan Medical Center, Phoenix, along with Dr. Mark Spangehl of the Mayo Clinic College of Medicine, Arizona.

By most metrics the antibiotic-resistant and susceptible strains of Staphylococcus epidermidis are phenotypically identical, and thus present a major challenge to traditional analytical separation techniques. This is where the ASU technology is finding its place.

Scientists in the Hayes group at ASU’s Department of Chemistry and Biochemistry — soon to become the School of Molecular Sciences — are enabling a handheld, battery-operated device that might deliver answers in minutes, instead of days.

Identification takes place within a microscopically small channel in a chip made from glass and silicone polymer. The microchannel features sawtooth shapes that allow researchers to sort and concentrate microbes based on their unique electrical properties. 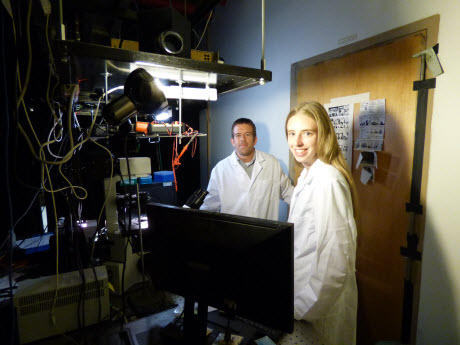 Two members of Hayes’ team – graduate students Paul V. Jones and Shannon (Huey) Hilton – work in the lab. They have separated extremely similar bacteria: antibiotic-resistant and susceptible Staphylococcus epidermidis. Their results have recently been published in the journal Analyst.Photo credit: Mark HayesThe phenomenon that makes this work is called dielectrophoresis, which involves an applied voltage that exerts force upon the bacteria. This force acts like a coin-sorter, causing bacteria to become trapped at different points along the channel. Where they stop, and at what voltage, depends on their molecular and electrical properties.

“The important thing for the patient and the doctor is getting the right answer right away. By advancing a fundamental area of science, we are able to create an entirely new way to differentiate these micro-organisms,” Hayes said.

“And it turns out that we have a core mechanism that could be integrated with smartphones and be widely, and cheaply, distributed. Frankly, we only hoped that this strategy could work this well, even though our theoretical calculations suggest that it could.”

The researchers fluorescently labeled the two strains (each with a different dye) of Staphylococcus epidermidis so that they could be visually distinguished during the separation process. They injected the cells into each channel and simply applied voltage to drive the cells downstream. The geometric features of the channel shape the electric field, creating regions of different intensity. This field creates the dielectrophoretic force that allows some cells to pass, while trapping others based on their phenotype.

This separation has significant potential implications for health care, as rapid and early detection will significantly improve therapeutic outcomes. The current results establish a foundation for biophysical separations as a direct diagnostic tool, potentially improving nearly every figure of merit for diagnostics and antibiotic stewardship.

This work was supported by NIH, National Institute of Allergy and Infectious Diseases.