An illustration shows one possible way that a highly active iridium oxide layer could form on the surface of a strontium iridium oxide catalyst. After strontium atoms (green spheres) left the top layer through a corrosion process during the catalyst’s first two hours of operation, the top layer rearranged itself and became much better at accelerating chemical reactions.Illustration credit: C.F. Dickens/Stanford UniversityResearchers at Stanford University and the Department of Energy’s SLAC National Accelerator Laboratory have developed a tough new catalyst that carries out a solar-powered reaction 100 times faster than ever before, works better as time goes on, and stands up to acid.

And because it requires less of the rare and costly metal iridium, it could bring down the cost of a process that mimics photosynthesis by using sunlight to split water molecules—a key step in a renewable, sustainable pathway to produce hydrogen or carbon-based fuels that can power a broad range of energy technologies.

The team published their results Sept. 1 in the journal Science.

The discovery of the catalyst—a very thin film of iridium oxide layered on top of strontium iridium oxide—was the result of an extensive search by three groups of experts for a more efficient way to accelerate the oxygen evolution reaction, or OER, which is half of a two-step process for splitting water with sunlight. 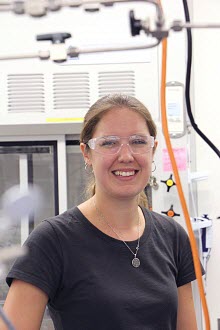 Stanford PhD student Linsey Seitz investigated the properties of a tough new catalyst material that carries out a key water-splitting reaction in acid. She is now a Helmholtz postdoctoral fellow at the Karlsruhe Institute of Technology in Germany.Photo credit: Jesse D. Benck/Stanford University“The OER has been a real bottleneck, particularly in acidic conditions,” said Thomas Jaramillo, an associate professor at SLAC and Stanford and deputy director of the SUNCAT Center for Interface Science and Catalysis. “The only reasonably active catalysts we know that can survive those harsh conditions are based on iridium, which is one of the rarest metals on Earth. If we want to bring down the cost of such a pathway for making fuels from renewable sources and carry it out on a much larger scale, we need to develop catalyst materials that are more active and that use little or no iridium.”

The search started with SUNCAT theorists, who used computers to explore a database of materials and find the ones with the most potential to do exactly what was needed. Catalysts accelerate chemical reactions without being used up in the process, and databases like this one have become an important tool for designing catalysts to order, rather than testing thousands of materials in a time-consuming, trial-and-error approach.

Based on the results, a team led by SLAC staff scientist Yasuyuki Hikita and SLAC/Stanford professor Harold Hwang, both investigators with the Stanford Institute for Materials and Energy Sciences (SIMES), synthesized one of the catalyst candidates, strontium iridium oxide. Linsey Seitz, a PhD student in Jaramillo’s group and first author of the report, investigated the material’s properties.

To the team’s surprise, this catalyst worked even better than expected, and kept improving over the first two hours of operation. Experiments probing the surface of the material indicated that a corrosion process released strontium atoms into the surrounding fluid during this initial period. This left a film of iridium oxide just a few atomic layers thick that was much more active than the original material, and 100 times more efficient at promoting the OER than any other acid-stable catalyst known to date. 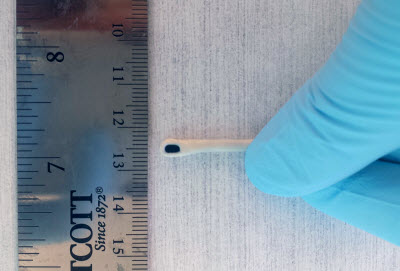 Sample of a new catalyst material created by SLAC and Stanford researchers. It’s 100 times better than previous catalysts at accelerating the oxygen-evolving reaction in acid, a key step in a pathway for making sustainable fuels.Photo credit: Linsey Seitz/Stanford University“A lot of materials do this type of thing—surfaces can be very dynamic, changing during the course of a reaction—but in this case the catalyst changes in a way that gives you excellent performance in acid,” Jaramillo said. “This is unusual, because under these conditions most materials are either poor catalysts or they completely fall apart, or both.”

The researchers still don’t know exactly why this surface layer is so active, although the theorists, including SUNCAT graduate students Colin Dickens and Charlotte Kirk, have provided some ideas. Jaramillo’s group will be taking a closer look at the catalyst with X-ray beams at SLAC’s Stanford Synchrotron Radiation Lightsource, a DOE Office of Science User Facility, to determine exactly how the atoms on the surface rearrange themselves and why this boosts the catalyst’s performance.

“To make a commercially viable catalyst we will need to reduce the amount of iridium in the material even more,” said Jens Nørskov, director of SUNCAT and a professor at SLAC and Stanford. “But there are many possibilities, and this gives us some very good leads.”

SUNCAT and SIMES are joint institutes of Stanford and SLAC. Major funding for the project came from the DOE Office of Science.