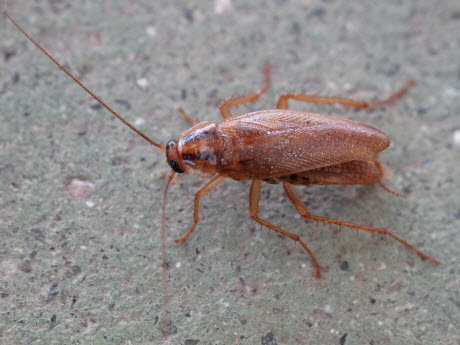 German cockroachPhoto credit: Lmbuga, Wikimedia CommonsMANHATTAN — If you've ever lived in a cockroach-infested dwelling, you know that if you see one of the pesky insects, many more are hiding just out of sight.

New research from a team including Kansas State University's Ludek Zurek, professor of entomology, is helping explain how German cockroaches, a particularly nasty species, know to gather in a certain area. Their communication system is mediated, at least in part, by the presence of certain gut microbes.

The roaches aggregate by tracing pheromones in feces from other roaches. Zurek and colleagues determined that young German cockroaches, or nymphs, prefer the pheromones excreted from roaches with a certain gut bacterial profile. Aggregating accelerates nymphal development and reproductive maturation, and carries other benefits such as helping roaches locate mates, avoid predators and find food sources.

"This result is another example demonstrating the importance of microbes in biology of eukaryotes, including mediation of animal behavior," Zurek said.

German cockroaches are major pests of human homes worldwide. They transmit pathogens, contaminate food and cause allergies. Researchers have long attempted to identify specific fecal aggregation pheromones and have been puzzled by widely varied chemical profiles. Zurek and colleagues identified major fecal volatile carboxylic acids, or VCAs, that comprise pheromones and reflect the microorganism contents of a cockroach's gut and, in turn, its local environment. Introducing a synthetic blend of fecal VCAs into cockroaches that had no microorganisms in their digestive tracts resulted in increased aggregation response in young roaches, and experiments indicated that roaches can discriminate among the odors from different microbes.

In addition to helping researchers understand the science that drives basic insect behaviors, these results could lead to better pest control.

"This research can lead to practical applications, such as devising more efficient traps for cockroaches based on the specific blend of volatile compounds originating from bacteria," Zurek said.

"This work adds a significant piece to our understanding of the role of microbes in shaping animal ecology and behavior, and raises new questions about these relationships and how to exploit them for managing pests—hallmarks of excellent research," said John Ruberson, head of the entomology department.

The study, "Gut bacteria mediate aggregation in the German cockroach," was published in the Proceedings of the National Academy of Sciences. Co-authors are Ayako Wada-Katsumata, Godfrey Nalyanya, and Coby Schal from North Carolina State University; Wendell Roelofs from Cornell University; and Aijun Zhang from the U.S. Department of Agriculture's Agricultural Research Service. The project was funded in part by the U.S. Department of Housing and Urban Development's Healthy Homes Program, the Alfred P. Sloan Foundation, the National Science Foundation and the Blanton J. Whitmire endowment at North Carolina State University.