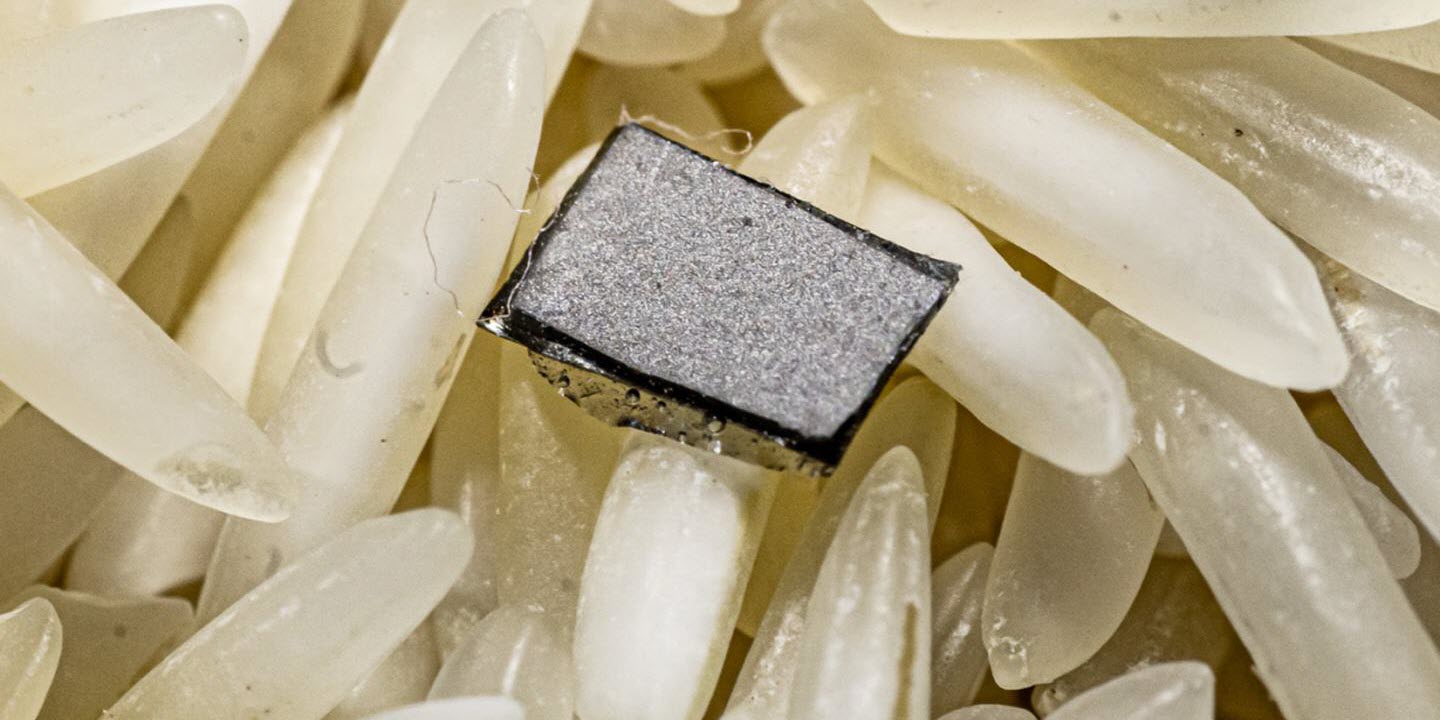 A sample of Rice University's 'magnetoelectric' film atop a bed of uncooked rice. Rice neuroengineers created the bi-layered film to power implantable neural stimulators that are approximately the size of a grain of rice. The film converts energy from a magnetic field directly into an electrical voltage, eliminating the need for a battery or wired power connection.
Jeff Fitlow, Rice University

HOUSTON , TX — June 8, 2020 — Rice University neuroengineers have created a tiny surgical implant that can electrically stimulate the brain and nervous system without using a battery or wired power supply.

The neural stimulator draws its power from magnetic energy and is about the size of a grain of rice. It is the first magnetically powered neural stimulator that produces the same kind of high-frequency signals as clinically approved, battery-powered implants that are used to treat epilepsy, Parkinson's disease, chronic pain, and other conditions.

The research was made available online on June 8 in the journal Neuron.

The implant's key ingredient is a thin film of "magnetoelectric" material that converts magnetic energy directly into an electrical voltage. The method avoids the drawbacks of radio waves, ultrasound, light and even magnetic coils, all of which have been proposed for powering tiny wireless implants and have been shown to suffer from interference with living tissue or produce harmful amounts of heat.

To demonstrate the viability of the magnetoelectric technology, the researchers showed the implants worked in rodents that were fully awake and free to roam about their enclosures.

"Doing that proof-of-principle demonstration is really important, because it's a huge technological leap to go from a benchtop demonstration to something that might be actually useful for treating people," said Jacob Robinson, corresponding author of the study and a member of the Rice Neuroengineering Initiative. "Our results suggest that using magnetoelectric materials for wireless power delivery is more than a novel idea. These materials are excellent candidates for clinical-grade, wireless bioelectronics."

Tiny implants capable of modulating activity of the brain and nervous system could have wide-ranging implications. While battery-powered implants are frequently used to treat epilepsy and reduce tremors in patients with Parkinson's disease, research has shown that neural stimulation could be useful for treating depression, obsessive-compulsive disorders and more than a third of those who suffer from chronic, intractable pain that often leads to anxiety, depression, and opioid addiction.

Robinson said the miniaturization by study lead author and graduate student Amanda Singer is important because the key to making neural stimulation therapy more widely available is creating battery-free, wireless devices that are small enough to be implanted without major surgery. Devices about the size of a grain of rice could be implanted almost anywhere in the body with a minimally invasive procedure similar to the one used to place stents in blocked arteries, he said.

Study co-author and neuroengineering initiative member Caleb Kemere said, "When you have to develop something that can be implanted subcutaneously on the skull of small animals, your design constraints change significantly. Getting this to work on a rodent in a constraint-free environment really forced Amanda to push down the size and volume to the minimum possible scale."

For the rodent tests, devices were placed beneath the skin of rodents that were free to roam throughout their enclosures. The rodents preferred to be in portions of the enclosures where a magnetic field activated the stimulator and provided a small voltage to the reward center of their brains.

Singer, an applied physics student in Robinson's lab, solved the wireless power problem by joining layers of two very different materials in a single film. The first layer—a magnetostrictive foil of iron, boron, silicon, and carbon—vibrates at a molecular level when it's placed in a magnetic field. The second, a piezoelectric crystal, converts mechanical stress directly into an electric voltage.

"The magnetic field generates stress in the magnetostrictive material," Singer said. "It doesn't make the material get visibly bigger and smaller, but it generates acoustic waves and some of those are at a resonant frequency that creates a particular mode we use called an acoustic resonant mode."

Acoustic resonance in magnetostrictive materials is what causes large electrical transformers to audibly hum. In Singer's implants, the acoustic reverberations activate the piezoelectric half of the film.

Robinson said the magnetoelectric films harvest plenty of power but operate at a frequency that's too high to affect brain cells.

"A major piece of engineering that Amanda solved was creating the circuitry to modulate that activity at a lower frequency that the cells would respond to," Robinson said. "It's similar to the way AM radio works. You have these very high-frequency waves, but they're modulated at a low frequency that you can hear."

Singer said creating a modulated biphasic signal that could stimulate neurons without harming them was a challenge, as was miniaturization.

"When we first submitted this paper, we didn't have the miniature implanted version," she said. "Up to that point, the biggest thing was figuring out how to actually get that biphasic signal that we stimulate with, what circuit elements we needed to do that.

"When we got the reviews back after that first submission, the comments were like, 'OK, you say you can make it small. So, make it small,'" Singer said. "So, we spent another a year or so making it small and showing that it really works. That was probably the biggest hurdle. Making small devices that worked was difficult, at first."

All told, the study took more than five years, largely because Singer had to make virtually everything from scratch, Robinson said.

"There is no infrastructure for this power-transfer technology," he said. "If you're using radio frequency (RF), you can buy RF antennas and RF signal generators. If you're using ultrasound, it's not like somebody says, 'Oh, by the way, first you have to build the ultrasound machine.'

"Amanda had to build the entire system, from the device that generates the magnetic field to the layered films that convert the magnetic field into voltage and the circuit elements that modulate that and turn it into something that's clinically useful. She had to fabricate all of it, package it, put it in an animal, create the test environments and fixtures for the in vivo experiments and perform those experiments. Aside from the magnetostrictive foil and the piezoelectric crystals, there wasn't anything in this project that could be purchased from a vendor."

- This press release was originally published on the Rice University website