WOODS HOLE, MA — A selective mating experiment by a curious butterfly breeder has led scientists to a deeper understanding of how butterfly wing color is created and evolves. The study, led by scientists at University of California, Berkeley, and the Marine Biological Laboratory, Woods Hole, is published Apr. 7 in eLife.

When the biologists happened upon the breeder's buckeye butterflies—which normally are brown—sporting brilliant blue wings through selective mating, they jumped on the chance to explore what caused the change in color of the tiny, overlapping scales that produce the wing's color mosaic and pattern. They found that buckeyes and other Junonia species can create a rainbow of structural colors simply by tuning the thickness of the wing scale's bottom layer (the lamina), which creates iridescent colors in the same way a soap bubble does.

Structural color, often used in butterflies and other animals to create blue and green, is created by microscopic structures interacting with light to intensify some colors and diminish others. In contrast, pigmentary coloration is created by the absorption of specific colors (wavelengths) of light and is commonly employed to create colors such as yellow, orange, and brown.

"It was a surprise to find that the lamina, a thin sheet that looks very simple and plain, is the most important source of structural color in so many butterfly wing scales," says first author Rachel Thayer. Previous studies of structural coloration had largely focused on some extreme examples and mostly involved analyzing complex, 3D shapes on the top of the scales. 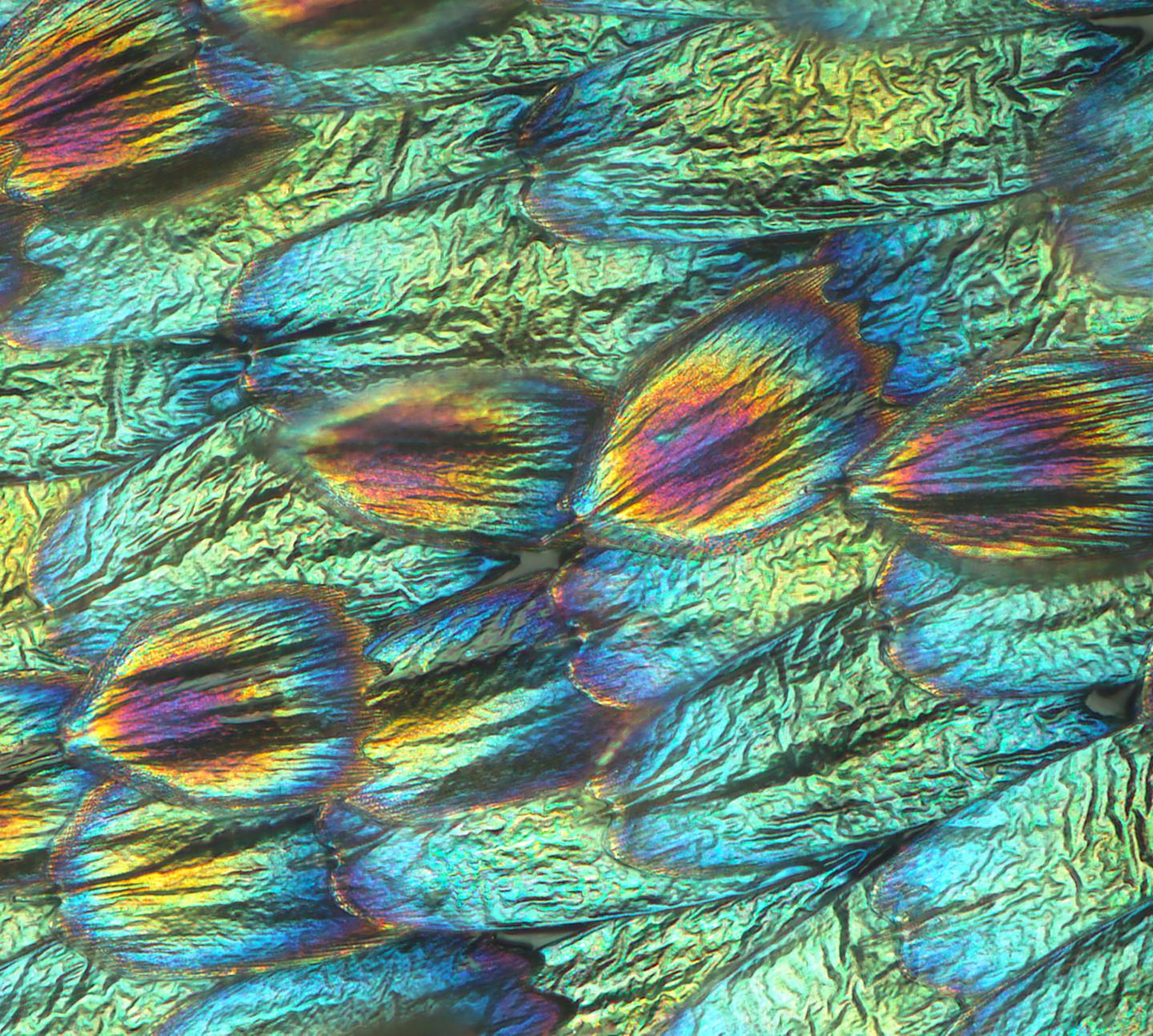 First, the team showed that blueness in the selectively bred buckeye wings was, in fact, structural color and was generated largely by the lamina. They then compared these blue scales with wild-type brown scales, and found the same general architecture except the lamina was about 75 percent thicker in the blue scales. Finally, they measured lamina thickness in nine species of Junonia and a tenth species, Precis octavia, and found a consistent relationship with scale color.

"In each Junonia species, structural color came from the lamina. And they are producing a big range of lamina thicknesses that create a rainbow of different colors, everything from gold to magenta to blue to green," says Thayer. "This helps us understand how structural color has evolved over millions of years." The color shifts as lamina thickness increases according to Newton's series, a characteristic color sequence for thin films, the team found.

"The color comes down to a relatively simple change in the scale: the thickness of the lamina," says senior author Nipam Patel, director of the Marine Biological Laboratory. "We believe that this will be a genetically tractable system that can allow us to identify the genes and developmental mechanisms that can control structural coloration." They identified one gene, optix, that can regulate lamina structural colors, and are currently searching for other candidates.

It was fortunate that the butterfly farmer, Edith Smith, had chosen buckeyes (Junonia coenia) for her mating experiment. For a variety of reasons, it is an ideal species for scientists to work with. "The buckeye genome is sequenced and other labs are working with it and have developed a number of experimental tools and protocols," Patel says. "And it grows reasonably well in the lab, which is a big plus because many butterflies can be hard to raise."

Smith's bred buckeyes, which displayed "rapid evolution" from brown scales to blue, helped them to understand that the same, simple mechanism of tuning lamina thickness can facilitate evolutionary change that can span just several generations or millions of years.