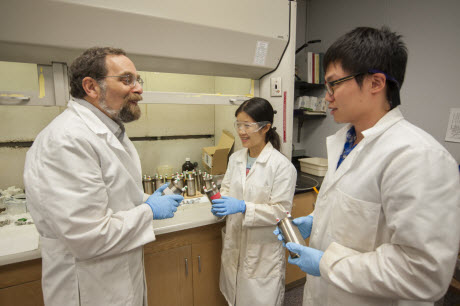 David Freedman (left) and his students hold some of the microcosms that contain rock samples from deep beneath the Earth’s surface.Photo courtesy of Clemson UniversityCLEMSON — Inside the 11 stainless steel cylinders lined up in David Freedman’s lab at Clemson University are rock samples that were pulled from deep below the Earth’s surface and could help shed light on one of the world’s most widespread environmental challenges.

The cylinders are central to the unique method Freedman and his team have developed to study whether natural processes are breaking down solvents that were released into the environment before their health hazards were fully understood.

With the cylinders, the researchers are launching a new study that could prove pivotal in determining how much of a threat the solvents pose to groundwater that ultimately becomes drinking water.

Researchers will be focused on chlorinated ethenes, which are solvents commonly used in metal degreasers and dry cleaning. Improper disposal dating to the dawn of the Industrial Revolution has left contaminated sites across the globe.

The study comes as regulators from New Jersey to California and worldwide decide whether to require remediation that comes with hefty price tags, potentially running into hundreds of millions of dollars per site.

The Clemson team recently learned its research will be funded with $1.1 million from the Strategic Environmental Research and Development Program.

Freedman, the chair of the environmental engineering and Earth sciences department at Clemson, is serving as principal investigator.

He said it is critical to ensure that contaminants are not migrating off site and putting neighbors in harm’s way.

“For any site, that’s contaminated with these types of solvents, a basic question that needs to be answered is whether or not the rate of degradation that’s occurring on the site is fast enough to keep the plumes from migrating off the site,” he said.

The idea for the metal cylinders came from a previous study of sandstone more than 100 meters beneath a former rocket-testing site in Southern California. Trichloroethylene, or TCE, used to run off the test pad and into a depression in the ground, soaking through the soil and into fractures in the rock below.

It also made its way into the rock itself.

“Usually, we don’t think of rock as something that will hold liquid, but at this particular location the rock is porous enough that it did,” Freedman said.

Over time, the solvent within the fractures has washed out. But the solvent that is now inside the rock itself is diffusing out and has the potential to contaminate water that flows through the fractures. Concerns have been raised that the site may need to be cleaned up.

When Clemson researchers became involved, they set out to help answer whether any reactions occur when solvents are inside the rock itself. The reactions could be a result of microbial activity or interactions with minerals in the rock.

“We wanted to know whether or not the solvent is breaking down,” Freedman said. “If there is evidence that it is breaking down, it lessens the concern that it will be coming out of the rock to an extent that it would require an active cleanup, which could cost hundreds of millions of dollars.”

When they first started testing, researchers hadn’t yet developed the cylinders now in Freedman’s lab.  Instead, they were analyzing crushed rock that was taken from the Southern California site and encased in glass bottles.

They found that the solvent degraded, which was good news. But the method raised questions about whether crushing the rock altered its structure and was no longer representative of what was happening underground.

That’s when Freedman and his team developed the technique with the cylinder, which they call a “microcosm.”

Each cylinder contains a rock core that is about three inches long, infused with trichloroethylene and wrapped in Teflon. End caps have been welded onto the ends of each cylinder to seal the rock inside.

Researchers have simulated groundwater flow by using one valve to inject water into the cylinder and another to suck it out. They test how much solvent is coming out of the rock once a week.

With the cylinder method, researchers have again found that the trichloroethylene does degrade, although it could take decades for it to disappear from the Southern California site, Freedman said.

In the new study, researchers will use the cylinder method to see if chlorinated ethenes in rock from different sites also degrade. It’s possible that the solvents could react differently in various types of rock, Freedman said.

Collaborators plan to survey about ten Department of Defense sites and pick three for sampling. Rock cores will be taken from the sites and delivered to Clemson, where they will be placed in cylinders.

The number of metal cylinders  in Freedman’s lab will grow to 96.

The kind of processes the researchers are studying would apply to not only Department of Defense sites but also industrial sites worldwide, he said.

Collaborators on the Clemson-led project are Battelle, the U.S. Navy, the U.S. Geological Survey, Rutgers University, GSI Environmental, and the University of Toronto.

Anand Gramopadhye, dean of the College of Engineering, Computing and Applied Sciences at Clemson, said the research will help provide access to clean water, one of this century’s grand challenges as identified by the National Academy of Engineering.

“The award underscores the creativity of the research method Dr. Freedman and his team have developed and the importance of ensuring clean water flows to our homes and businesses,” he said. “I congratulate them on the grant. It is richly deserved.”