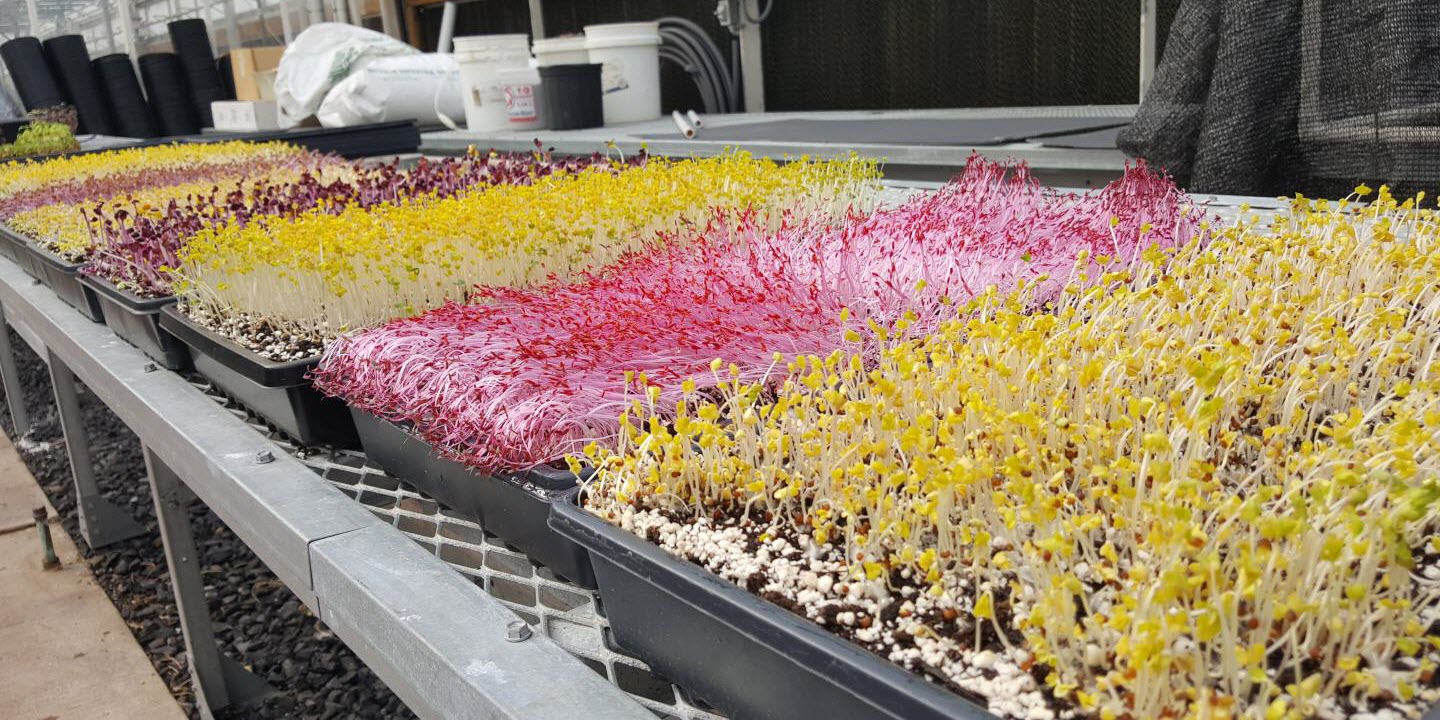 A collection of microgreens that are being tested for robust growth and nutritional properties in one of Penn State's greenhouses.
Francesco Di Gioia, Penn State

UNIVERSITY PARK, PA — In the midst of the COVID-19 pandemic, we have all become aware of how a global crisis can affect our access to food. But imagine the food security impacts of an even worse scenario—an all-out nuclear war, a large asteroid strike, or a supervolcano eruption. Such catastrophes could block out sunlight, alter rainfall patterns, and contaminate water supplies, which could drastically affect our food systems. An interdisciplinary team of Penn State professors has received $3 million from Open Philanthropy to study food resilience in the face of such catastrophic global events.

"Although they are infrequent in Earth's history, global catastrophes have caused massive extinction events," said Charles Anderson, an associate professor of biology and the lead investigator on the project. "For example, the Cretaceous-Paleogene extinction event is thought to have been caused by an asteroid impact near the Yucatan peninsula, possibly in combination with increased volcanic eruptions. Over the last century, the invention and stockpiling of nuclear weapons has raised the specter of a nuclear conflict that would kill many people outright, but could also cause massive firestorms that would loft soot high into the atmosphere, blocking sunlight and causing global famine during a 'nuclear winter' lasting more than a decade. Under these conditions, the ability to grow, produce, process, distribute, and store food could well become limiting factor for the survival of humanity."

In a pilot study leading up to their new project, the researchers discovered that existing food reserves and seed banks are inadequate to ensure human survival after a major global catastrophe; that the breakdown of global transportation, communication, and economic networks following a catastrophe would decimate long-distance food trade and distribution, and that limited crop production might remain possible in certain locations post-catastrophe, but would need to be supplemented by alternative methods of food generation, such as converting inedible plant materials like wood into food.

With the four-year grant from Open Philanthropy, the team will expand upon these findings; develop, test, and optimize strategies for emergency food resilience; and produce recommendations for prudent planning for post-catastrophic food resilience. The project will comprise several focus areas, including:

"Our goal is to determine ways to significantly improve the food security, probability of survival, and quality of life for as many people as possible following a global catastrophe," said Anderson. "If successful, our project will accurately predict how much food could be produced in limiting environments using conventional agricultural methods and provide novel strategies for supporting human nutrition."

The team's findings could also potentially be adapted to other types of global disturbances, such as the current COVID-19 pandemic and climate change, as well as to novel environments, such as space or other planets.

"Despite the current capability of our global food systems to produce enough calories for everyone, socioeconomic inequities and challenges in food distribution and storage already cause hunger for millions of people, and the current COVID-19 crisis has unfortunately placed many more people at risk of malnutrition and starvation," said Anderson. "This is especially damaging for children, whose brain development can be permanently affected by malnutrition. Even in the United States, the wealthiest country on Earth, one in six families with children are currently facing food insecurity. By thinking innovatively about how to ensure human nutrition under extremely challenging conditions, we hope to make discoveries that will improve food security under many different conditions and raise the prospects for healthy development and economic productivity for everyone."