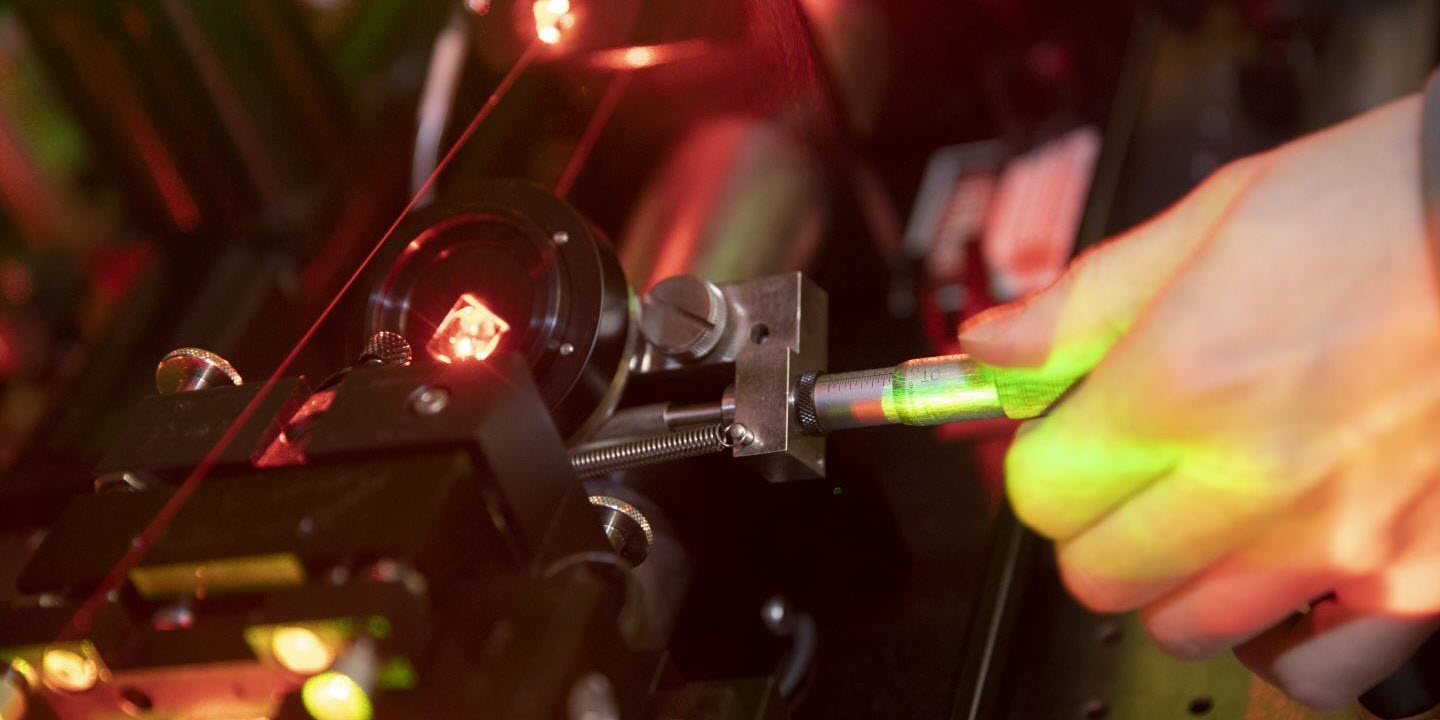 After firing the lasers and bombarding the molecules with light, the scientists gathered around the camera to check the results. By seeing how far these cold molecules expanded they would know almost instantly whether they were on the right track or not to charting new paths in quantum science by being the first to cool (aka slow down) a particularly complex, six-atom molecule using nothing but light.

"When we started out on the project we were optimistic but were not sure that we would see something that would show a very dramatic effect," said Debayan Mitra, a postdoctoral researcher in Harvard's Doyle Research Group. "We thought that we would need more evidence to prove that we were actually cooling the molecule, but then when we saw the signal, it was like, 'Yeah, nobody will doubt that.' It was big and it was right there."

The study led by Mitra and graduate student Nathaniel B. Vilas is the focus of a new paper published in Science. In it, the group describes using a novel method combining cryogenic technology and direct laser light to cool the nonlinear polyatomic molecule calcium monomethoxide (CaOCH3) to just above absolute zero.

The scientists believe their experiment marks the first time such a large complex molecule has been cooled using laser light and say it unlocks new avenues of study in quantum simulation and computation, particle physics, and quantum chemistry.

"These kinds of molecules have structure that is ubiquitous in chemical and biological systems," said John M. Doyle, the Henry B. Silsbee Professor of Physics and senior author on the paper. "Controlling perfectly their quantum states is basic research that could shed light on fundamental quantum processes in these building blocks of nature."

The use of lasers to control atoms and molecules—the eventual building-blocks of a quantum computer—has been used since the 1960s and has since revolutionized atomic, molecular, and optical physics.

The technique essentially works by firing a laser at them, causing the atoms and molecules to absorb the photons from the light and recoil in the opposite direction. This eventually slows them down and even stops them in their tracks. When this happens, quantum mechanics becomes the dominant way to describe and study their motion.

"The idea is that on one end of the spectrum there are atoms that have very few quantum states," Doyle said. Because of this, these atoms are easy to control with light since they often remain in the same quantum state after absorbing and emitting light, he said. "With molecules they have motion that does not occur in atoms—vibrations and rotations. When the molecule absorbs and emits light this process can sometimes make the molecule spin around or vibrate internally. When this happens, it is now in a different quantum state and absorbing and emitting light no longer works [to cool it]. We have to 'calm the molecule down,' get rid of its extra vibration before it can interact with the light the way we want."

Scientists—including those from the Doyle Group which is part of the Harvard Department of Physics and a member of the Harvard-MIT Center for Ultracold Atoms—have been able to cool a number of molecules using light, such as diatomic and triatomic molecules which each have two or three atoms.

Polyatomic molecules, on the other hand, are much more complex and have proven much more difficult to manipulate because of all the vibrations and rotations.

To get around this, the group used a method they pioneered to cool diatomic and triatomic molecules. Researchers set up up a sealed cryogenic chamber where they cooled helium to below four Kelvin (that's close to 450 degrees below zero in Fahrenheit). This chamber essentially acts as a fridge. It's this fridge where the scientists created the molecule CaOCH3. Right off the bat, it was already moving at a much slower velocity than it would normally, making it ideal for further cooling.

Next came the lasers. They turned on two beams of light coming at the molecule from opposing directions. These counterpropagating lasers prompted a reaction known as Sisyphus cooling. Mitra says the name is fitting since in Greek mythology Sisyphus is punished by having to roll a giant boulder up a hill for eternity, only for it to roll back down when he nears the top.

The same principle happens here with molecules, Mitra said. When two identical laser beams are firing in opposite directions, they form a standing wave of light. There are places where the light is less intense and there are places where it is stronger. This wave is what forms a metaphorical hill for the molecules.

At that point, the molecule moves closer to a region where the light intensity is high, where it will more likely absorb a photon and rolls back down to the opposite side. "All they can do is keep doing this again and again and again," Mitra said.

By looking at images from cameras placed outside the sealed chamber, the scientists then inspect how much a cloud of these molecules expands as it travels through the system. The smaller the width of the cloud, the less kinetic energy it has—therefore the colder it is.

Analyzing the data further, they saw just how cold. They took it from 22 milikelvin to about 1 milikelvin. In other words, just a few thousandths of a decimal above absolute zero.

In the paper, the scientists lay out ways get the molecule even colder and lay out some of the doors it opens in a range of modern physical and chemical research frontiers. The scientists explain, the study is a proof of concept that their method could be used to cool other carefully chosen complex molecules to help advance quantum science.

"What we did here is sort of extending the state of the art," Mitra said. "It's always been debated whether we would ever have technology that will be good enough to control complex molecules at the quantum level. This particular experiment is just a stepping stone."

- This press release was originally published on the Harvard Gazette