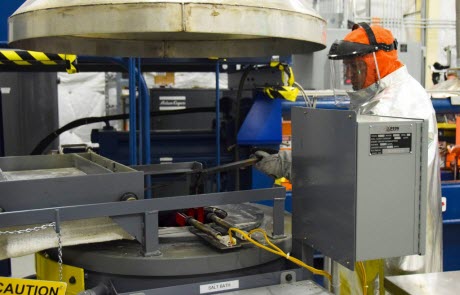 Photo courtesy of Idaho National LaboratoryAdvanced nuclear reactors will use new types of fuel. To ensure such systems are safe, experimental fuel samples must be fabricated and tested in safe research environments such as those at Idaho National Laboratory. Marking an important step toward the advancement of a new type of reactor, INL employees recently completed the first successful test of fabrication equipment in the Experimental Fuels Facility (EFF). Specifically, they finished depleted uranium extrusions — a process of shaping material by forcing it through a die.

The test — conducted with Washington-based TerraPower — serves to restore a metallic fuel fabrication capability that has not been used in the United States since the 1980s. INL is working cooperatively with TerraPower to demonstrate the ability to use extrusion as a way to produce fuel slugs. TerraPower is developing a Traveling Wave Reactor (TWR) concept, a new type of fast reactor.

“The Department of Energy has placed a priority on collaboration in recent years which has enabled TerraPower’s cooperation with INL and allowed both teams to achieve more than what TerraPower or INL engineers could have accomplished single-handedly,” said Chris Levesque, TerraPower president. “This is a great example of what U.S. ingenuity can offer to advance Generation IV designs.”

In recent years, the Experimental Fuels Facility at INL’s Materials and Fuels Complex has undergone a transformation as INL has supported TerraPower. In addition to the extrusion press, the EFF has been newly equipped with a billet casting furnace, inert glove box, draw bench, annealing furnace and several other types of machining equipment.

For the extrusion test, a cylindrical billet of depleted uranium metal was subjected to high temperature and pressure to force it through a shaped die. The process produces a thinner, longer form suitable to use as fuel pins for continued experiments and testing of fuels for a Traveling Wave Reactor.

“TerraPower’s TWR reactor concept uses a metallic fuel form to help achieve both the safety and economic benefits inherent in its design,” said Doug Adkisson, TerraPower’s senior vice president of Operations, who visited MFC to observe one of the first extrusion demonstrations. “Because such fuel has not been manufactured for over 30 years, to make the TWR a reality, TerraPower has had to engage a number of vendors to re-create and improve the processes needed for production.”

In previous tests, billets of copper and an aluminum-bronze alloy were used as surrogates during initial tests of the extrusion press and other equipment recently installed in EFF. These earlier tests allowed INL employees to fine-tune the extrusion processes — temperatures, feed rates, die material and other factors — before proceeding to extrusion of uranium for fuel pins. Using an extrusion process has the potential to reduce both cost and waste compared with the casting process employed for producing Experimental Breeder Reactor-II fuel pins. The extrusion process also requires less follow-up work to ensure quality and consistency of the final fuel product before it is encased in cladding.

“INL has a unique set of facilities, capabilities and resources for demonstrating the feasibility of some of these key processes,” Adkisson said. “The collaboration between INL and TerraPower has been outstanding and really underscores what can be achieved in a pretty short time frame.” The lab’s employees were equally excited about the new capabilities.

“After a long hiatus in this type of large-scale development of metallic fast reactor fuel fabrication, this work is reinvigorating and we very much appreciate TerraPower’s selecting INL as a collaborator in these efforts,” said Doug Porter, a directorate fellow in INL’s Nuclear Fuels & Materials Division. Porter serves as the technical lead for INL’s cooperative work on fuels with TerraPower.

“The fabrication capabilities we’re establishing to support their work have expanded INL’s already unmatched suite of capabilities for nuclear fuel research and development,” he said. “The team we have assembled should be very proud of its accomplishments.”