Researchers in Japan and China believe they have found new molecular fossils of archaea using a method of analysis commonly used in forensic science.

According to a system designed by microbiologist Carl Woese, there are three domains of life on Earth—bacteria, archaea and eukaryota. To date, the distribution of archaea remains unclear especially for geologic periods dating back more than 2 million years. This is because except for halophilic, methanogenic, and methanotrophic archaea*, molecular fossils of archaea are rarely found, while those of bacteria and eukaryote are commonly found. 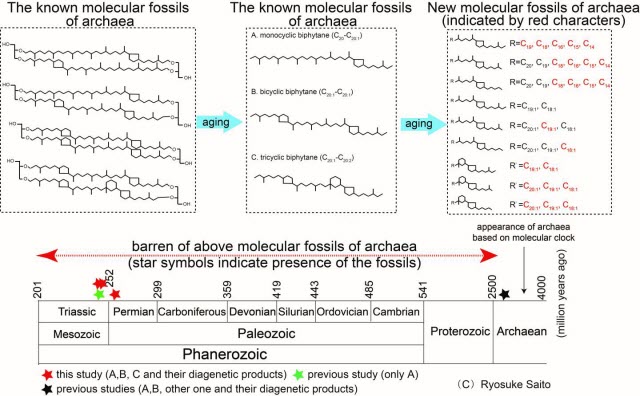 Molecular fossils of Archaea (cyclic biphytanes and diagenetic products of them) and their distribution. The researchers found new molecular fossils of archaea in sedimentary rocks deposited in southern China about 250 million years ago, using a common analytical instrument (GC-MS). They believe this will reveal archaeal distribution from 200 million years ago.Image Credit: Ryosuke Saito

A team led by Dr. Ryosuke Saito and professor Kunio Kaiho of Tohoku University took sedimentary rock samples from southern China, and analyzed the organic molecules in them using gas chromatography-mass spectrometry (GC-MS). They found new fossils among the molecular fossils of archaea.

This is the first study to detect diagenetic products using GC-MS, a conventional instrument found widely in organic geochemistry laboratories. GC-MS has been regarded as a "gold standard" for forensic substance identification and is used in drug detection, fire investigation, environmental analysis and explosives investigation. It's also been used to identify extra-terrestrial samples.

Saito's team is now studying the archaeal distribution on Earth more than 2 million years ago. They believe that by analyzing the fossils using the GC-MS method, it will be easier to find archaea in sedimentary rocks.