LIVERMORE, Calif. — Add rapid, mobile testing for Zika and other viruses to the list of things that smartphone technology is making possible. Researchers at Sandia National Laboratories have developed a smartphone-controlled, battery-operated diagnostic device that weighs under a pound, costs as little as $100, and can detect Zika, dengue, and chikungunya within 30 minutes. 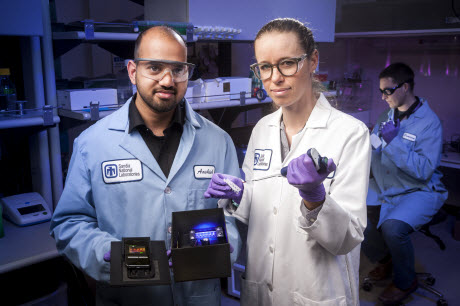 Sandia National Laboratories chemical engineer and lead paper author Aashish Priye offers a view into the Zika box prototype, along with co-authors Sara Bird, a virologist, center, and Cameron Ball, a biomedical engineer.Photo credit: Randy WongTesting for these mosquito-borne viruses currently requires a laboratory, and patients can wait days for results. The tests require instruments that are roughly the size of a microwave oven and can cost up to $20,000. This makes rapid testing unrealistic for limited-resource clinics in developing countries where the viruses are prevalent.

The Sandia team describes its rapid-testing prototype in a paper published this week in the journal Scientific Reports, “A smartphone-based diagnostic platform for rapid detection of Zika, chikungunya and dengue viruses.”

Smartphone technology is a key feature of the device. “In addition to creating an app that serves as a simple interface to operate the device, we were able to adapt smartphone camera sensors to replace traditional laboratory sample analysis tools, allowing for unprecedented mobility,” chemical engineer and lead author Aashish Priye said.

Laboratory in a box

The Sandia team’s device is based on the loop-mediated isothermal amplification (LAMP) diagnostic method, which eliminates the need to process a biological sample, such as blood or urine, before testing. Conventional viral testing involves transporting a sample to a laboratory, extracting DNA or RNA from it, and then multiplying the genetic materials through a process called polymerase chain reaction (PCR). This process involves heating and cooling the sample many times, so that any viral DNA/RNA in the sample is replicated enough to be detected.

Repeatedly heating and cooling the sample is power intensive and demands the complexity of PCR machines. Detection of the copied viral material also requires expensive components such as fluorimeters. The complexity and expense of traditional PCR machines have been major hurdles in moving PCR devices outside of laboratories and into the clinics where they are most needed.

Like PCR, LAMP copies viral DNA/RNA, but without the heating and cooling cycle, a heavy-duty power source isn’t needed. The addition of a few carefully designed biochemical agents allows a LAMP box to test a sample that is heated only once to 65 degrees Celsius (150 degrees Fahrenheit) for half an hour.

LAMP also eliminates the need for extra sample preparation before testing. “We’ve demonstrated that the chemistry we’re using can amplify viral RNA directly from raw, unprocessed samples,” said Sandia chemical engineer and project lead Robert Meagher. “That is the ideal for a point-of-care testing scenario because you don’t want to have extra equipment for isolating DNA or RNA.”

Meagher and his team previously developed a method to combine LAMP with an additional detection technique so they could test multiple viruses simultaneously. This other technique, known as quenching of unincorporated amplification signal reporters (QUASR), involves tagging fragments of synthesized viral DNA called primers with fluorophores—molecules that emit bright light signals. The primers incorporate into the heated and amplified sample DNA. QUASR then causes samples containing viral DNA/RNA to appear bright, while negative reactions remain dark.

For the Zika project, Meagher’s team developed a novel algorithm that allows a smartphone sensor to act as a fluorimeter, detecting QUASR LAMP light signals if they appear. LAMP works so simply that the user need only place the smartphone on top of the LAMP box and open an app. The app turns on the heater to initiate the LAMP reaction.

Once the 30-minute testing period is up, the smartphone photographs the sample. The app then employs a novel image analysis algorithm to accurately determine the color and brightness of the glow emitted from the LAMP reaction. This smartphone-based image analysis offers much greater detection certainty than the lab technician’s naked eye.

Zika virus has been linked to severe fetal abnormalities, including microcephaly and congenital blindness, as well as neurological disorders that can strike people at any age. By enabling diagnosis in half an hour, the device could help clinicians make faster decisions about patient care and isolation, and rapidly alert public health authorities so they can take measures to prevent spread of the virus.

Furthermore, Zika, dengue and chikungunya are spread by the same mosquito type and have similar early symptoms. Sandia’s prototype diagnostic tool could enable care providers to test quickly for all three at the same time, preventing misdiagnoses. The same tool can also be adapted to detect other human or animal pathogens.

The cost of making a LAMP box prototype to test for these viruses depends largely on the cost of the phone selected for use with it. “There are billions of smartphones in the world, even in developing countries, and this tool doesn’t require the highest-end smartphone on the market,” Priye said. “It only needs to have an optical sensor and be able to run the app.” The smartphone used in Sandia’s successful tests of the prototype cost a mere $20. Ultra-accessible and ultra-portable, the Zika box prototype could one day become a staple in point-of-care clinics worldwide.

Study to Examine COVID-19 Transmission between Pets and Owners

Study to Examine COVID-19 Transmission between Pets and Owners