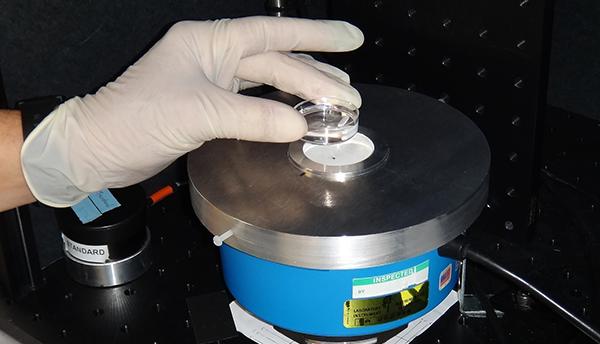 A scientist places a water sample onto a custom-made platform before a test. Each water sample contains microorganisms such as the parasite Giardia and adenoviruses, both of which can make humans sick.
T. Larason, NIST

While awaiting full access to their labs due to COVID-19 restrictions, scientists at the National Institute of Standards and Technology (NIST) have taken this rare opportunity to report the technical details of pioneering research they conducted on the disinfection of drinking water using ultraviolet (UV) light.

Back in 2012, the NIST scientists and their collaborators published several papers on some fundamental findings with potential benefits to water utility companies. But these articles never fully explained the irradiation setup that made the work possible.

Now, for the first time, NIST researchers are publishing the technical details of the unique experiment, which relied on a portable laser to test how well different wavelengths of UV light inactivated different microorganisms in water. The work appears July 22 in the Review of Scientific Instruments (RSI).

"We've been wanting to formally write this up for years," said NIST's Tom Larason. "Now we have time to tell the world about it."

One urgency for publishing a full description of the NIST system is that researchers envision using this UV setup for new experiments that go beyond the study of drinking water and into disinfection of solid surfaces and air. The potential applications could include better UV disinfection of hospital rooms and even studies of how sunlight inactivates the coronavirus responsible for COVID-19.

"As far as I know, no one has duplicated this work, at least not for biological research," Larason said. "That's why we want to get this paper out now."

Ultraviolet light has wavelengths that are too short for the human eye to see. UV ranges from about 100 nanometers (nm) to 400 nm, whereas humans can see a rainbow of color from violet (about 400 nm) to red (about 750 nm).

One way to disinfect drinking water is to irradiate it with UV light, which breaks down harmful microorganisms' DNA and related molecules.

At the time of the original study, most water irradiation systems used a UV lamp that emitted most of its UV light at a single wavelength, 254 nm. For years, though, water utility companies had shown increasing interest in a different type of disinfection lamp that was "polychromatic," meaning it emitted UV light at multiple different wavelengths. But the effectiveness of the new lamps was not well defined, said Karl Linden, a University of Colorado Boulder (CU Boulder) environmental engineer who was a principal investigator on the 2012 study.

"We discovered in the mid-2000s that polychromatic UV sources were more effective for virus inactivation—specifically because these lamps produced UV light at low wavelengths, under 230 nm," Linden said. "But it was hard to quantify how much more effective and what the mechanisms of that effectiveness were."

In 2012, a group of microbiologists and environmental engineers led by CU Boulder was interested in adding to the knowledge base that water utility companies had regarding UV disinfection. With funding from the Water Research Foundation, a nonprofit organization, the scientists were looking to methodically test how sensitive various germs were to different wavelengths of UV light.

Normally, the light source for these experiments would have been a lamp that generates a wide range of UV wavelengths. To narrow the band of frequencies as much as possible, the researchers' plan was to shine the light through filters. But that still would have produced relatively wide, 10-nm bands of light, and unwanted frequencies would have bled through the filter, making it difficult to determine exactly which wavelengths were inactivating each microorganism.

The microbiologists and engineers wanted a cleaner, more controllable source for the UV light. So, they called on NIST to help.

NIST developed, built and operated a system to deliver a well-controlled UV beam onto each sample of microorganisms being tested. The setup involved putting the sample in question—a petri dish filled with water with a certain concentration of one of the specimens—into a light-tight enclosure.

What makes this experiment unique is that NIST designed the UV beam to be delivered by a tunable laser. "Tunable" means it can produce a beam of light with an extremely narrow bandwidth—less than a single nanometer—over a wide range of wavelengths, in this case from 210 nm to 300 nm. The laser was also portable, allowing scientists to bring it to the lab where the work was being conducted. Researchers also used a NIST-calibrated UV detector to measure the light hitting the petri dish before and after each measurement, to make sure they really knew how much light was hitting each sample.

There were a lot of challenges to get the system to work. Researchers ferried the UV light to the petri dish with a series of mirrors. However, different UV wavelengths require different reflective materials, so NIST researchers had to design a system that used mirrors with various reflective coatings that they could swap out between test runs. They also had to procure a light diffuser to take the laser beam—which has a higher intensity in the center—and spread it out so that it was uniform across the entire water sample.

The end result was a series of graphs that showed how different germs responded to UV light of different wavelengths—the first data for some of the microbes—with greater precision than ever measured before. And the team found some unexpected results. For example, the viruses exhibited increased sensitivity as wavelengths decreased below 240 nm. But for other pathogens such as Giardia, UV sensitivity was about the same even as the wavelengths got lower.

"The results from this study have been used quite frequently by water utility companies, regulatory agencies, and others in the UV field working directly on water—and also air—disinfection," said CU Boulder environmental engineer Sara Beck, first author on three papers produced from this 2012 work. "Understanding which wavelengths of light inactivate different pathogens can make disinfection practices more precise and efficient," she said.

The same system that NIST designed for delivering a controlled, narrow band of UV light to water samples can also be used for future experiments with other potential applications.

For example, researchers hope to explore how well UV light kills germs on solid surfaces such as those found in hospital rooms, and even germs suspended in the air. In an effort to reduce hospital-acquired infections, some medical centers have been blasting rooms with a sterilizing beam of UV radiation carried in by robots.

But there are no real standards yet for use of these robots, the researchers said, so although they can be effective, it's hard to know how effective, or to compare the strengths of different models.

"For devices that irradiate surfaces, there are a lot of variables. How do you know they're working?" Larason said. A system like NIST's could be useful for developing a standard way to test different models of disinfection bots.

Another potential project could examine the effect of sunlight on the novel coronavirus, both in the air and on surfaces, Larason said. And the original collaborators said they hope to use the laser system for future projects related to water disinfection.

"The sensitivity of microorganisms and viruses to different UV wavelengths is still very much relevant for current water and air disinfection practices," Beck said, "especially given the development of new technologies as well as new disinfection challenges, such as those associated with COVID-19 and hospital-acquired infections, for example."

- This press release was originally published on the NIST news website