Imagine if there were a way to detect early-stage cardiovascular disease or cancer without exposing a patient to potentially harmful radiation. Consider the benefits of a therapeutic application that could destroy tumors without surgery or stimulate motor control in the brain of a patient suffering from Parkinson’s disease. Funded by the National Institutes of Health, Elisa Konofagou, professor of biomedical engineering at Columbia University, and her research team are bringing these medical marvels closer to reality using the acoustic energy of ultrasound technology.

Though ultrasound—the use of high-frequency sound waves to produce images—is not itself a new technology, Konofagou and her team have developed novel ways to use it in the detection and treatment of specific medical problems.

“We have pioneered a way to use ultrasound to assess the elasticity of tissues such as the heart, the vessels, and tumors in the breast and pancreas,” says Konofagou. “We use the intrinsic movement of the organ, or the movement induced by the acoustic wave, to detect the elasticity.”

The method of harmonic motion imaging can effectively identify cancerous tissue—which typically has greater stiffness than normal soft tissues—and can measure mechanical functions of the heart muscle, disruptions in which can indicate disease.

“A radiation-free method is important because it is safely used for children (who are more sensitive to radiation doses), eliminates burn risks, and allows for follow-ups at necessary frequencies without worrying about a build-up of radiation,” says Konofagou. 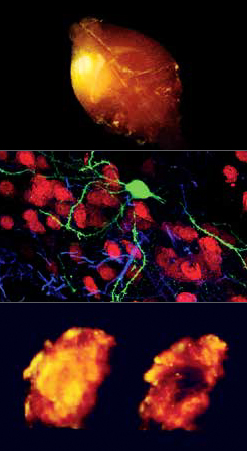 Top: Focused ultrasound (FUS) in combination with microbubbles is used to noninvasively and transiently open the blood-brain barrier (BBB) in the caudate putamen region. The BBB opened region is revealed with contrast-enhanced MRI as the highlighted region; middle: Adeno-Associated Virus (AAV) carrying green fluorescent protein (GFP) gene was successfully delivered across the blood-brain barrier (BBB) with transcranial FUS, where AAV transduction was observed in neurons (green); bottom: Three-dimensional Harmonic Motion Imaging of the human breast before (left) and after (right) thermal ablation.Images courtesy of Elisa Konofagou

These benefits are critical not only in the team’s ultrasound imaging studies, but also in the therapeutic use of ultrasound at higher powers to burn tissue locally and selectively.

“This is done outside the body by focusing acoustic waves, similar to what you would see with sun rays through a magnifying glass, to destroy tumors,” she says. “We are testing the therapeutic ultrasound’s effects and developing methods for real-time monitoring of the treatment on breast and pancreatic cancer and hope to translate this technology to humans within the next couple of years. This could potentially provide a noninvasive and nonsurgical alternative to tumor treatment, especially in the case of benign tumors most common in both young and older women.”

Using therapeutic ultrasound to treat benign or cancerous tumors without the need for anesthesia would mean a patient could return to his or her standard routine quickly, avoiding the high costs, risk of infection, recovery period, and likelihood of scarring often associated with surgery.

If this precise ultrasound technique proves to be effective, it could be essential to the treatment of inoperable cancers in organs like the brain, prostate, pancreas, and kidneys.

Konofagou’s team is also focused on using ultrasound to open the blood-brain barrier in order to deliver drugs directly to brain cells of patients with neurodegenerative diseases like Alzheimer’s, as well as to stimulate various parts of the brain to induce motor control.

“Biomedical engineering brings together different disciplines—biology, engineering, and medicine—that would not otherwise intersect,” she says. “Since a lot of the basics have been uncovered in those disciplines, to advance to more complex understanding, multidisciplinary efforts must be conducted and brought together under the same umbrella. Biomedical engineering facilitates that. For the first time, we can generate the required platforms of expertise to image and manipulate, and therefore ultimately understand why the heart or the brain is wired like it is or what triggers and sustains tumor growth.” 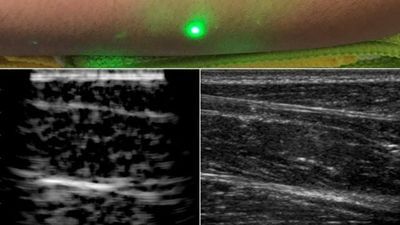 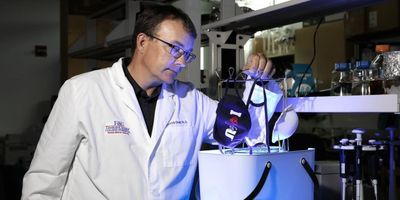 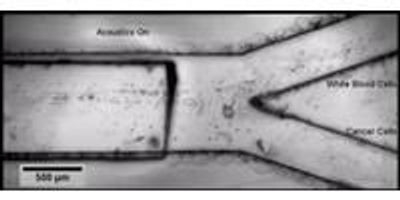 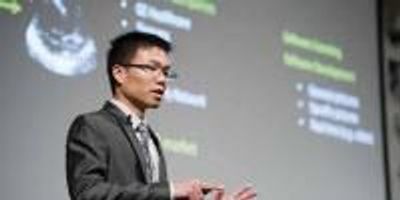 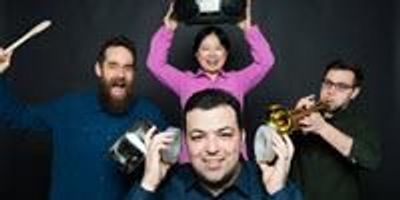 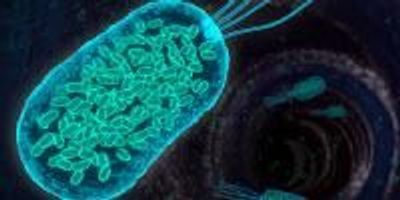