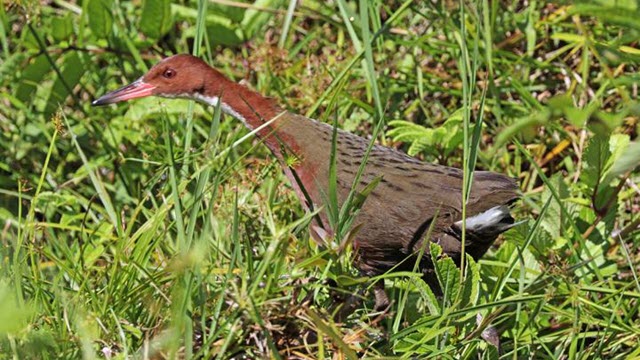 New research has shown that the last surviving flightless species of bird, a type of rail, in the Indian Ocean had previously gone extinct but rose from the dead thanks to a rare process called "iterative evolution."

The research, from the University of Portsmouth and Natural History Museum, found that on two occasions, separated by tens of thousands of years, a rail species was able to successfully colonize an isolated atoll called Aldabra and subsequently became flightless on both occasions. The last surviving colony of flightless rails is still found on the island today.

This is the first time that iterative evolution (the repeated evolution of similar or parallel structures from the same ancestor but at different times) has been seen in rails and one of the most significant in bird records.

The white-throated rail is a chicken-sized bird, indigenous to Madagascar in the south-western Indian Ocean. They are persistent colonizers of isolated islands, who would have frequent population explosions and migrate in great numbers from Madagascar. Many of those that went north or south drowned in the expanse of ocean and those that went west landed in Africa, where predators ate them. Of those that went east, some landed on the many ocean islands such as Mauritius, Reunion, and Aldabra, the last-named is a ring-shaped coral atoll that formed around 400,000 years ago.

With the absence of predators on the atoll, and just like the Dodo of Mauritius, the rails evolved so that they lost the ability to fly. However, Aldabra disappeared when it was completely covered by the sea during a major inundation event around 136,000 years ago, wiping out all fauna and flora including the flightless rail.

The researchers studied fossil evidence from 100,000 years ago when the sea levels fell during the subsequent ice age and the atoll was recolonized by flightless rails. The researchers compared the bones of a fossilized rail from before the inundation event with bones from a rail after the inundation event. They found that the wing bone showed an advanced state of flightlessness and the ankle bones showed distinct properties that it was evolving toward flightlessness.

This means that one species from Madagascar gave rise to two different species of flightless rail on Aldabra in the space of a few thousand years.

Lead researcher Dr. Julian Hume, avian paleontologist and research associate at the Natural History Museum, said: "These unique fossils provide irrefutable evidence that a member of the rail family colonized the atoll, most likely from Madagascar, and became flightless independently on each occasion. Fossil evidence presented here is unique for rails, and epitomises the ability of these birds to successfully colonize isolated islands and evolve flightlessness on multiple occasions."

Co-author professor David Martill, from the School of Earth and Environmental Sciences at the University of Portsmouth, said: "We know of no other example in rails, or of birds in general, that demonstrates this phenomenon so evidently. Only on Aldabra, which has the oldest palaeontological record of any oceanic island within the Indian Ocean region, is fossil evidence available that demonstrates the effects of changing sea levels on extinction and recolonisation events.

"Conditions were such on Aldabra, the most important being the absence of terrestrial predators and competing mammals, that a rail was able to evolve flightlessness independently on each occasion."

The study is published in the latest issue of the Zoological Journal of the Linnean Society.