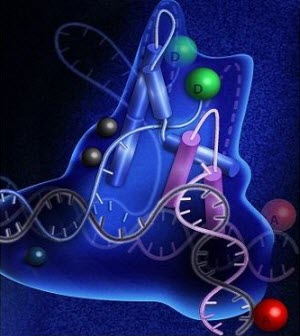 FEN1 uses a two-step verification mechanism before repairing DNA damage.Photo credit: © 2017 Samir HamdanMicroscopes that reveal the hidden complexities of life down to the nanoscale level have shown in exquisite detail how an enzyme involved in DNA repair works its molecular magic.

This enzyme—known as Flap endonuclease 1, or FEN1—is often highly overexpressed or faulty in cancer and other types of diseases. Now that researchers know how it operates, they plan to use the information to design an inhibitor against it, said Samir Hamdan, King Abdullah University of Science & Technology (KAUST) associate professor of bioscience, who led the study into FEN11.

As its name suggests, FEN1 removes overhanging "flaps" of single-stranded DNA that dangle off the edge of the double helix during repair or replication of the genome. Scientists have advanced a number of theories for how FEN1 operates, but it's been unclear how exactly the enzyme recognizes damage in the genome and how then it removes the fault.

To get a closer look, Hamdan and his colleagues turned to a sophisticated microscopy technique known as single-molecule fluorescence resonance energy transfer, or smFRET. This method repeatedly images the same area, each time turning on and off different glowing probes that tag different molecules. Superimposing these images together yields a nanoscale-quality molecular movie with a millisecond to sub-millisecond temporal resolution.

In this way, the team—which included first author Fahad Rashid and several other KAUST graduate students—showed that FEN1 first binds to DNA weakly if damage is detected. Only then, if it's the kind of damage that FEN1 can fix, does the enzyme lock on and get to work.

Given how critical FEN1 is for replication and repair, Hamdan said it's no surprise that FEN1 is highly overexpressed in several types of cancer or that functional mutations associated with the enzyme are linked to cancer and various diseases. Finding a drug that blocks FEN1's function could thus provide a highly effective anticancer strategy, and the KAUST study could help this quest in two ways.

"The first is that by understanding the molecular mechanisms of how FEN1 works, we will understand better how defects in FEN1 cause human diseases and result in genomic instability," Hamdan says.

"The second is that our work defined critical intermediary steps along the path of substrate recognition that are specific to FEN1, which would provide a new direction to target FEN1 specifically."