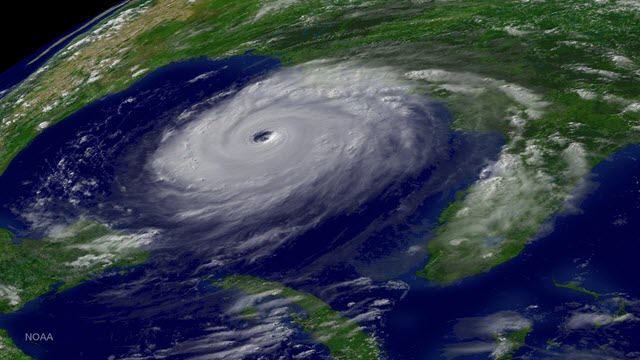 A new paper led by a A.R. Siders of the University of Delaware states that communities should plan for retreat in some cases from areas that are flood- or fire- or hurricane-prone and adjust their building codes and services as needed.Credit: NOAA National Environmental Satellite, Data, and Information Service (NESDIS)

When it comes to climate change, moving people and development away from at-risk areas can be viewed, not as a defeat, but as a smart strategy that allows communities to adapt and thrive.

That's the case for carefully planned "managed retreat" made by three environmental researchers in an article published Aug. 22 in the Policy Forum section of the journal Science. The article was written by lead author A.R. Siders of the University of Delaware (UD), with co-authors Miyuki Hino and Katharine J. Mach of Stanford University and the University of Miami.

"We need to stop picturing our relationship with nature as a war," said Siders, who is a core faculty member of UD's Disaster Research Center and an assistant professor of public policy and administration and of geography.

"We're not winning or losing; we're adjusting to changes in nature. Sea levels rise, storms surge into flood plains, so we need to move back."

Moving away from coastal and other endangered areas usually occurs after disaster strikes, she said, with emergency evacuations and their aftermath often handled inefficiently and haphazardly. Instead, the researchers argue that retreating from those areas should be done thoughtfully, with planning that is strategic as well as managed.

"Retreat is a tool that can help achieve societal goals like community revitalization, equity, and sustainability if it is used purposefully," Siders said. "People sometimes see retreat as defeatist, but I see it as picking your battles."

In the Science paper, the researchers point out that retreat is a difficult and complex issue for many reasons, including the short-term economic gains of coastal development, subsidized insurance rates, and disaster recovery costs, and people's attachment to the place where they live and to the status quo. Also, when disaster strikes, the more affluent residents are more able to relocate, often leaving behind those who don't have the financial resources to move.

"No matter the circumstances, moving is hard," Hino said. "People have chosen where to live for a reason, and it is often difficult to find a place to move to that meets all their social, cultural, and financial requirements.

"One major challenge with retreat is that we're so focused on getting people out of harm's way, we miss the chance to help them move to opportunity."

The researchers take the long view, noting that retreat may be the answer to climate change in some areas, but it may not be a step that's necessary this year or even this decade.

"The challenge is to prepare for long-term retreat by limiting development in at-risk areas," they write, and making plans for further action based on responding to specific triggers and constantly monitoring and evaluating conditions.

"The story of retreat as a climate response is just beginning," Mach said. "Retreat is compelling because it brings together so many aspects of how societies work, what individuals are trying to achieve, and what it takes to ensure preparedness and resilience in a changing climate."

The paper makes note of a variety of areas where additional work is needed, including coordination of various levels of government and support for relocation assistance programs. First, Siders said, communities must identify which areas they most want to protect and how to encourage and assist relocation.

"Managed retreat needs to be embedded in larger conversations and social programs," she said. "Retreat can't be just about avoiding risk. It needs to be about moving toward something better."