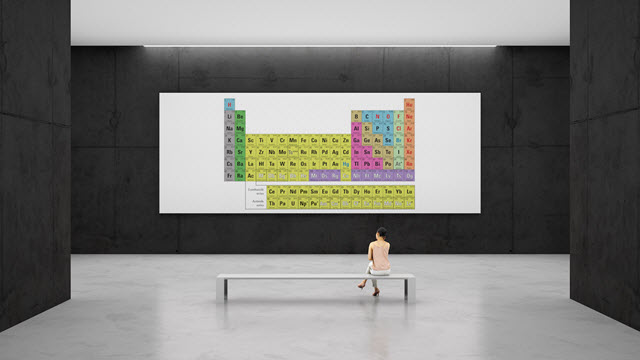 Watching paint dry may seem like a boring hobby, but understanding what happens after the paint dries can be key in preserving precious works of art.

The formation of metal soaps in artwork composed with oil paints can cause “art acne"—including pimpling and more severe deterioration—which poses a pressing challenge for art conservation around the globe.

It is affecting the works of Georgia O’Keefe, Vincent Van Gogh, Francisco de Goya, and Jackson Pollock, among many others, and researchers haven’t yet found a good solution to stop its effects.

To learn more about the chemical processes involved in aging oil paints in microscopic and nanoscale detail, an international team led by researchers at the National Gallery of Art and the National Institute of Standards and Technology (NIST) conducted a range of studies that included 3D X-ray imaging of a paint sample at the Advanced Light Source (ALS), a synchrotron at the Department of Energy’s Lawrence Berkeley National Laboratory (Berkeley Lab).

“An estimated 70 percent of oil paintings might already have or will have these metal-soap problems,” said Xiao Ma, Charles E. Culpeper Fellow at the National Gallery of Art who was the lead author of the team’s study, published in the journal Angewandte Chemie International Edition.

“In our collections we see soaps in the paintings—I would say it’s not uncommon,” he noted. “They might not already show at the surface, but exist at the ‘ground,’ or priming layers.”

The same damaging chemistry, which previous studies have traced to the mixing of fatty acids with metal ions present in paint pigments including lead, zinc, copper, cadmium, and manganese, has been found occurring in some organic coatings, too, such as those used for bronze sculptures and in industry, Ma noted.

The latest study focused on one paint called “Soft Titanium White” that was painted on a canvas in 1995 by a paint manufacturer. In addition to titanium dioxide (TiO2), it contains zinc oxide (ZnO), which is known to form soaps. Paints like it have been in use since around 1930, Ma said. The aged sample hasn’t been treated in any way and has remained in a controlled environment.

The study found that clusters of a compound called aluminum stearate are distributed randomly in the paint, and that zinc carboxylates, known as soaps, are intermixed within them. The high spatial resolution analysis showed that one sort of zinc soap, zinc stearate, aggregates in proximity to these clusters.

An X-ray microtomography scan of a paint sample (left) shows a random distribution of components in a paint sample, and a zoomed-in view by a technique known as photothermal induced resonance (right) reveals that zinc carboxylates, known as soaps, are not evenly distributed but are intermixed with aluminum stearate (yellow). One type of zinc soap, called zinc stearate, is also shown to form in clusters of nanoparticles (red) near the aluminum stearate cluster. The scale bars are in microns, or millionths of a meter.Credit: NIST, Berkeley Lab

And while the paint sample didn’t yet show physical deterioration, researchers found signs that paint fragmentation and chipping (spalling) could eventually occur if zinc soaps become more concentrated and localized within the paint over time.

“We’re trying to get a handle on the very beginning processes to understand where the soaps might be forming and where they might be moving—if they’re moving,” said Barbara Berrie, who leads the Scientific Research Department at the National Gallery of Art and served as a co-leader of the study. “We want to make sure we understand what’s going on in more contemporary paintings so that these works are here for the future.”

The study could have broader implications for developing better methods for conservation based around the observed chemistry in oil paints, she said. “I can see this maybe being applied generally to issues of preservation and treatments for all kinds of works of art,” she said.

Dula Parkinson, a staff scientist at the ALS who participated in the study, said the X-rays revealed the size, shape, and distribution of tiny spots resembling bubbles in a paint sample that measured just a couple of millimeters across. 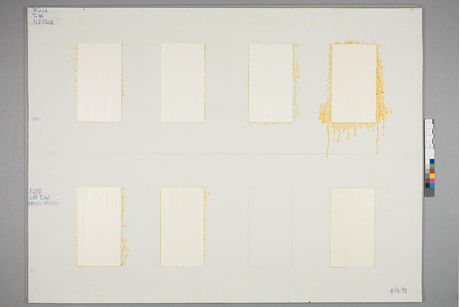 This image shows a canvas with paint samples that are studied in detail to learn about chemical changes as the samples age. (Click image for a larger view.)Credit: National Gallery of Art“They wanted to understand the basic chemistry and basic processes of what was going on,” he said. “These structures that they see are really common in lots of paintings, and so they’re trying to see why these structures are here.” The imaging, using a technique called X-ray microtomography, mapped varied thicknesses in the paint and revealed some microscopic cracking.

Microtomography at the ALS has also been used to provide microscopic views of a wide range of samples, from plant stems to spacecraft heat shields.

Besides the X-ray exploration of a paint sample at the microscale, the team also used a technique known as photothermal induced resonance (PTIR) that exceeded the magnification limits of conventional light-based microscopes. PTIR couples infrared (IR) lasers with an atomic force microscope to provide a nanoscale window into the paint’s chemistry at a scale much smaller than is achievable with conventional IR microscopes.

Andrea Centrone, a project leader for the Nanoscale Spectroscopy Group at NIST who co-led the study with Berrie, noted that the PTIR technique provides chemical mapping with resolution similar to that of atomic-force microscopy—which offers a scan of the sample via a process that is similar to a record player’s needle moving over a surface and mapping it

While the tip scans over the sample, infrared pulses are absorbed locally and the sample heats up and expands rapidly. This “kicks” the tip like a struck tuning fork and provides chemically specific information about the sample.

The paint sample had a very rough, sticky surface that was difficult to chemically map, so Centrone worked with collaborators at NIST to adapt the technique so that the scanning tip oscillated above the sample surface, touching it gently instead of dragging across it, allowing the capture of high-resolution data.

“We are able to capture very small details down to 10 or 20 nanometers,” or billionths of a meter, Centrone said. “We were able to detect which kind of metal soap had formed in the paint samples.”

The study notes that the same techniques that were used in combination to explore the paint chemistry could be applied more broadly in other fields where the samples are challenging because their chemistry isn’t uniform, and detailed knowledge of chemistry over different scales is required, such as in biomedicine and energy storage.

Berrie said she looks forward to future studies that apply the same techniques to explore different types and layers of paint and other issues for preservation of works of art.

“We hope that we will be able to do some comparing and contrasting of different combinations of oil-pigment interactions,” she said. “We will be able to explore some of the underlying chemistry of paintings that we still don’t know much about,” to provide insight for art preservation, too. “And, we are trying to help inform the range of choices that art conservators have.”

The ALS is a DOE Office of Science User Facility.

Researchers from Berkeley Lab, the National Gallery of Art, the National Institute of Standards and Technology, the European research platform on ancient materials IPANEMA (CNRS), Université de Versailles Saint-Quentin-en-Yvelines, Université Paris-Saclay, the University of Maryland, and William & Mary participated in the study. 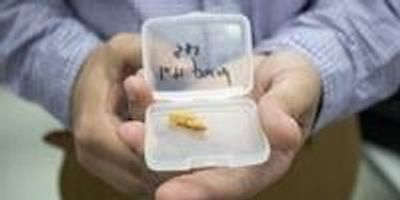