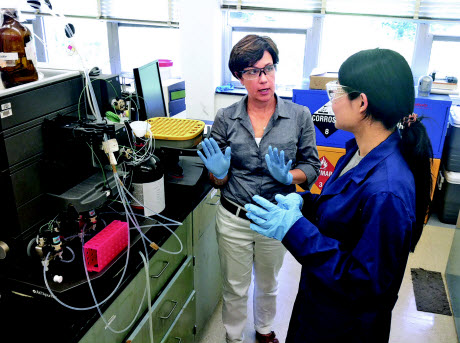 Mathematician Lea Jenkins (left) and Juan Wang, a doctoral student in chemical engineering, use mathematical equations to optimize membranes used to manufacture drugs. Anna SimonWhen Lea Jenkins looks at a bowl-shaped stadium, she sees a parabola. “I see the world as a bunch of math equations,” she says. But she also sees people, and ways to solve their problems. “Math’s more interesting if there’s some application I’m moving toward,” she says.

Lately, Jenkins, an associate professor of mathematics at Clemson University, has been working with chemical engineer Scott Husson and two graduate students—Juan Wang from chemical engineering and Anastasia Wilson from mathematical sciences—to help people get affordable medication. Their idea is to speed up a key separation process used to manufacture pharmaceuticals.

A recent morning finds Jenkins and Wang deep in conversation in Husson’s lab on the second floor of Earle Hall. They stand next to a piece of machinery about the size of a carry-on suitcase with lots of plastic tubes running in and out of it. The machine is an AKTA purifier, explains Wang, who holds a thin, circular piece of porous white material called a membrane adsorber. The adsorber, placed between connecting tubes, separates fluids and captures proteins. Jenkins and Wang are discussing how to fine-tune the membrane structure to eliminate clogging and separate fluids faster.

Speedier separation of protein from fluid could dramatically increase yield and efficiency for manufacturers of medications known as biologics, improving availability and lowering cost for consumers, Husson says.

Biologics include blood-pressure medications and chemotherapy drugs, as well as medications for chronic conditions such as rheumatoid arthritis, macular degeneration, and multiple sclerosis.

Trouble is, manufacturers can’t make enough of some medications to keep up with demand. A high of 267 drug shortages were reported in 2011, according to the University of Utah Drug Information Service. The number dropped to 140 in 2013. A chemotherapy drug shortage made headlines in 2013, when 83 percent of oncologists and hematologists surveyed in a study reported shortages. Nearly all of the doctors reporting shortages also said patient care was affected. 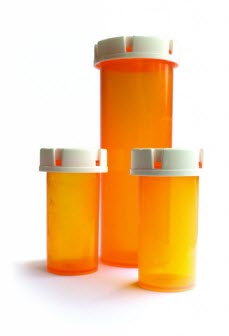 By 2016, 80 percent of the top ten drugs made in the U.S. will be biologics, and fifty percent of the top one hundred drugs made in the U.S. will be biologics.Clemson UniversityThe shortages have multiple causes, but one major factor is filtration. Manufacturers of biologics manipulate cells in their laboratories to produce protein and then harvest the cells to get the protein out, Husson says. Clogged filters slow the flow.

To solve the problem, Husson, Jenkins, and their students are working to improve the membrane, finding the optimal pattern for its structure. The chemical engineers fabricate the membrane. The mathematicians use computerized models to simulate the behavior of fluids transported through the membrane and optimize the structure.

“We use math to model and simulate a physical process, so they don’t have to go into the lab each time a parameter of the project changes,” Jenkins says. “We can do thousands of computations within minutes to screen many different combinations.”

Husson says the researchers can increase production speed by two orders of magnitude. That’s comparable to producing 500 grams of medication in the same time and with the same volume of separation from material currently yielding 5 grams, Husson explains.

Husson and chemical engineer Jinxiang Zhou have formed a Greenville-based company, Purilogics LLC, and are working with a pharmaceutical manufacturer to commercialize the technology. A Clemson patent is pending and they intend to license the product, Husson says. 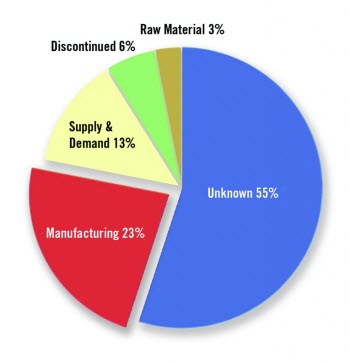 Causes for U.S. drug shortages: More efficient manufacturing could improve the supply.University of Utah Drug Information ServiceThe mathematics of fluid and flow, it turns out, apply to more than drug making. Jenkins has developed models to protect aquifers from chemical spills, and she has worked with oil companies to get oil out of the ground more efficiently. She has also provided models simulating water flow under various conditions to help berry farmers in drought-stricken areas of California better manage their water resources and recharge aquifers, including factors such as time to market and cost of production.

“The framework can apply anywhere,” Jenkins says. “Optimizations change with parameters. You can model all of that with equations.”

It’s math that goes beyond the spreadsheet and into applications, and that’s the kind of math that excites Jenkins.

“That’s a great part of working with the engineering community,” Jenkins says. “They develop new models. They give them to me and I’m one of the first people to work with them to develop simulation tools and supplement their lab work in finding the answers they’re chasing.”

This type of collaboration between mathematicians and engineers opens new doors for graduate students on the brink of their careers as well. Wang says she’s gained an ability to travel seamlessly between her own discipline of chemical engineering and that of mathematics, enabling her to translate computations into physical properties in the lab. Wilson says working on the joint project makes her a more “well-rounded applied mathematician,” which increases her marketability after graduation.

“Working with people outside of the field of math shows that I can understand material that is outside of my field in addition to showing that I can communicate complex mathematical ideas to people who have varying degrees of mathematical knowledge,” Wilson says.

Wilson had considered switching from math to engineering in graduate school to work with applications that produce tangible results. She stayed in math because she also enjoys “the focus on the mathematical foundations behind the applications,” she says.

This project allows her to do both.

“The answers that I obtain from my research have the potential to help Scott and Juan optimize their membranes, that is, make the membranes work more efficiently when separating proteins,” Wilson says. “Much of the time, the protein separation process is used for the purification of proteins for therapeutics, so I get a lot of fulfillment in my research knowing that the results will improve the world we live in.”

Technology and Trends in Biophysical Characterization

Technology and Trends in Biophysical Characterization