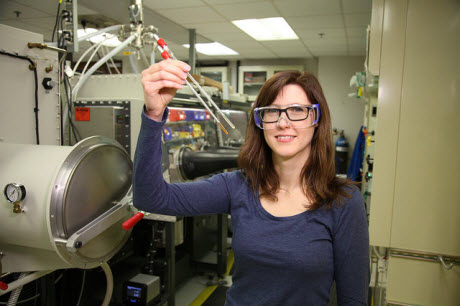 PNNL chemist Molly O'Hagan explores different catalysts inspired by nature, looking for one that runs fast and efficiently.Photo courtesy of Pacific Northwest National LaboratoryRICHLAND, Wash. – One reason we can't bottle summer sunshine and save the solar energy for rainy days is that we don't have an efficient way to store it. Nature stores energy in chemical bonds, like when plants photosynthesize our food. Researchers are trying to design catalysts based on inexpensive metals to store energy like nature does.

The chemical bonds in hydrogen gas, for example, could power fuel cells, internal combustion engines, or generators. Using a natural catalyst from bacteria for inspiration, researchers have now developed the fastest synthetic catalyst for hydrogen production—producing 45 million molecules per second. Instead of a costly metal, this catalyst uses inexpensive, abundant nickel at its busy core.

Related Article: Some Catalysts Contribute Their Own Oxygen for Reactions

Although the catalyst requires more energy to run than a conventional platinum catalyst, the insight garnered from this result might eventually help make hydrogen fuel in an environmentally friendly, affordable way, the researchers report in the chemistry journal Angewandte Chemie International Edition.

"The next thing we'll work on is making it more efficient," said chemist Molly O'Hagan at the Department of Energy's Pacific Northwest National Laboratory. "We still have to feed it too much electricity to produce the hydrogen."

The team at PNNL has been developing a nickel-based catalyst modeled on an enzyme from nature called a hydrogenase for several years. Back in 2011, working in the Center for Molecular Electrocatalysis, a DOE Energy Frontier Research Center, they made a synthetic catalyst that was ten times faster than the natural one. That natural one clocked in at 100,000 hydrogen molecules per second.

As they worked on the catalyst development, the scientists would test their catalysts in reactions by combining the catalyst and acids in different media. One thing they noticed was that the synthetic catalyst produced hydrogen faster in a viscous liquid as opposed to a free-flowing liquid.

"We used this medium that was like pancake syrup and saw very fast rates," said O'Hagan. "The catalyst has arms that move around to position the pieces of the chemical reaction. Normally they are flopping around like crazy and the pieces don't always hit the right target. When this happens, the arms can actually get stuck in a position where the catalyst can't put the pieces together at all. We thought that this thick syrup might be slowing down the flopping, letting the arms put the pieces together more efficiently."

To test this hypothesis, the team designed the catalyst to have longer arms that would drag and slow down the flopping. They tested different arm lengths and found the longer the arms, the faster the catalyst produced hydrogen molecules.

They also measured how fast the arms were swinging around. The longer the arms, the slower the movement, allowing them to attribute the faster hydrogen production to the slower arm movements. Like excited children playing catch, calming down a bit lets them hit their mark more often.

"This work gave us some insight into the movement of the catalyst, and how to control that movement to make it more efficient," said O'Hagan.

Some computational work for this research was performed in EMSL, the Environmental Molecular Sciences Laboratory, a DOE Office of Science User Facility at PNNL. The study was supported by the Department of Energy Office of Science.