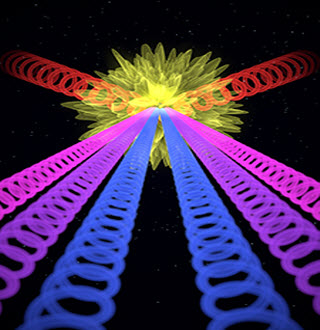 Counter-rotating circularly polarized laser beams (red) are crossed in a gas target to generate angularly separated extreme ultraviolet (EUV) harmonics with right- and left-circular polarization (blue, purple, magenta). This method provides straightforward and robust control of the direction, polarization, and spectrum of the light, opening the door to investigating materials in ways that were never before possible.Image courtesy of: Dan Hickstein and Steven Burrows, JILABy crossing two counter-rotating ultrafast laser beams in a gas target, scientists controlled the direction and polarization of laser-like beams in the extreme ultraviolet and soft x-ray portions of the spectrum. This represents a new ability to manipulate x-ray light using visible light, and obviates the need for inefficient and expensive optics that other approaches must use to filter and steer such beams.

This source enables, for example, tabletop measurements of dynamics in novel magnetic materials occurring on the fastest time scales. It also allows scientists to study chiral molecules, such as proteins or DNA, that come in left- and right-handed versions. Furthermore, the method used to generate the beams provides a path to generating isolated attosecond (one quintillionth of a second) pulses of light with circular polarization.

Researchers at JILA, a joint research institute of the University of Colorado and the National Institute of Standards and Technology, have developed a method to produce ultrafast pulses of circularly polarized extreme ultraviolet (EUV) light in a tabletop setup. The approach uses high-harmonic generation (HHG) driven by ultrafast laser pulses. In this process, laser pulses rip electrons from atoms, accelerate the electrons to high energy, and smash them back into the parent ion to generate pulses of extreme ultraviolet light at harmonics of the driving laser frequency. Specifically, the researchers developed a new experimental configuration in collaboration with the Colorado School of Mines, in which the HHG process is driven by two ultrafast laser beams of opposite circular polarization that are crossed in a gas sample. This novel HHG geometry simultaneously generates left- and right-circularly polarized EUV beams at each of the emitted harmonic wavelengths. This approach can be implemented on a laboratory tabletop, and the EUV beams of different helicity and harmonic order are physically separated from each other as well as from the driving lasers. The angular separation of the EUV beams eliminates the need for expensive filters, mirrors, or gratings that otherwise would attenuate and temporally broaden the pulse. This flexible arrangement allows researchers to make measurements at a particular wavelength and polarization by simply placing a sample into the isolated beam path. The researchers demonstrated the practical use of this new light source by measuring the magnetic circular dichroism of a 20-nm iron film. Furthermore, numerical simulations demonstrate that this phase-matching configuration makes possible the generation of isolated attosecond pulses with circular polarization. Before this discovery, there were no experimentally realized methods for generating isolated circularly polarized high harmonics.

This work was funded by the U.S. Department of Energy, Office of Science, Office of Basic Energy Sciences under the Award DE-FG02-99ER14982. Additional funding was provided by the National Science Foundation’s Engineering Research Centre in Extreme Ultraviolet Science and Technology, the Air Force Office of Scientific Research under MURI grant FA9550-10-1-0561, the Marie Curie International Outgoing Fellowship Program, the Deutsche Forschungsgemeinschaft (grant no. GR 4234/1–1), and the Swedish Research Council.