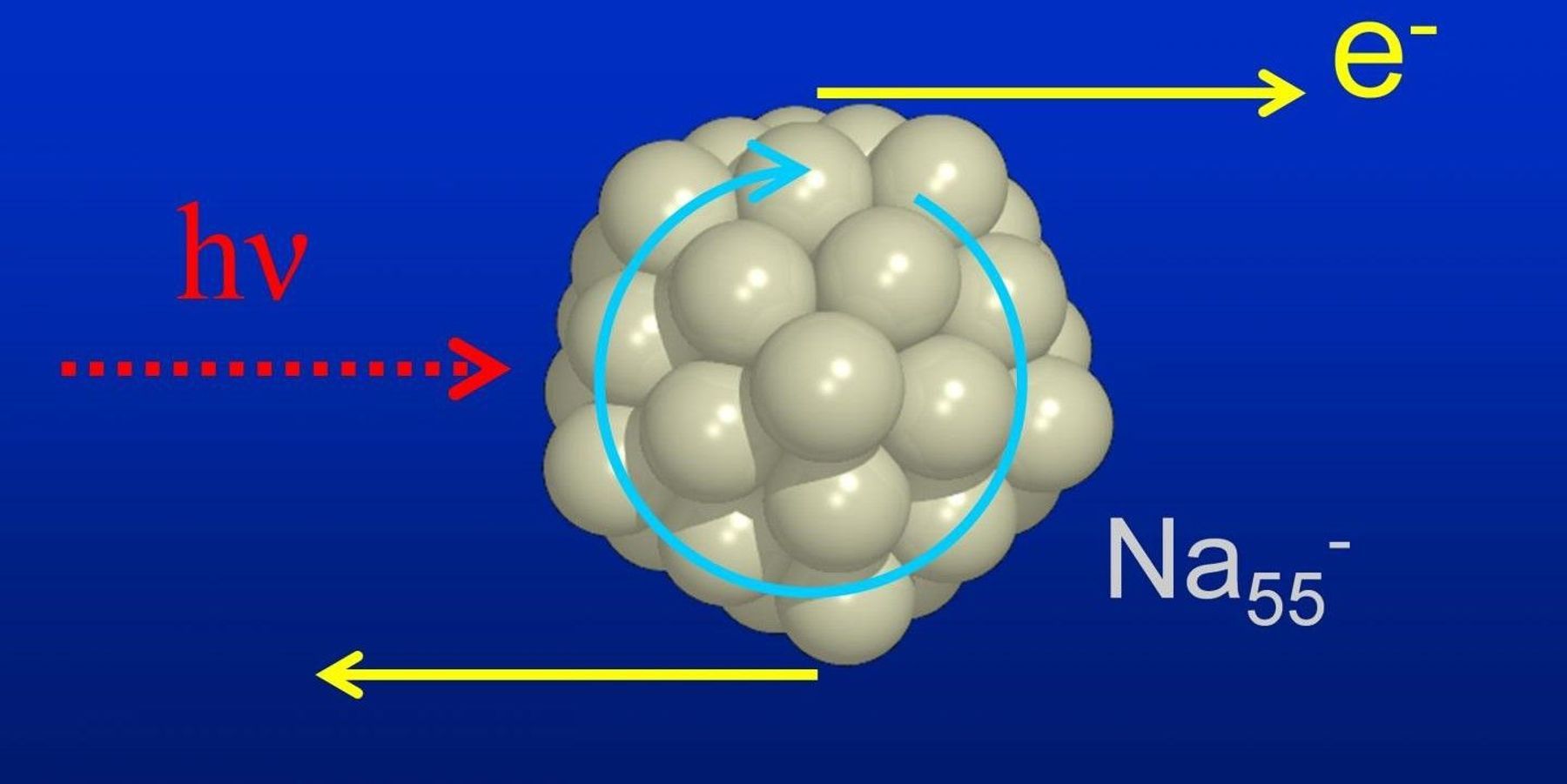 Illustration of photoemission: Electrons orbiting in a cluster (here in an anionic sodium cluster with 55 atoms) keep their momentum parallel to the surface, causing them to be emitted at a tangent to it at certain photon energies.
Illustration: Bernd von Issendorff

Photoemission is a property of metals and other materials that emit electrons when struck by light. Electron emission after light absorption was already explained by Albert Einstein. But since this effect is a highly complex process, scientists have still not been able to fully elucidate its details. Dr. Bernd von Issendorff and his team at the University of Freiburg's Institute of Physics have now succeeded in detecting a previously unknown quantum effect in the angular distributions of photoelectrons from cryogenic mass-selected metal clusters. The angular distributions resemble those of classical particles, a behavior that is surprisingly explainable by the strong electron–electron interaction in these many-electron systems. The researchers published this finding in the current issue of Physical Review Letters.

Metal clusters may be seen as quantum systems consisting of a countable amount of quantum particles—in this case electrons—in a simple spherical box potential. Electrons in simple metal clusters possess relatively well-defined angular momenta, although a cluster is never perfectly round. This is due to the virtually optimal shielding of the atomic nuclei by the electron system. Hence, a single electron experiences only an average interaction that is remarkably close to the interaction with a spherical box potential. As a consequence, the electrons practically assume angular momentum eigenstates, i.e., rotate with a well-defined angular momentum. Moreover, the photoemission of the electron occurs only at the cluster surface, because only there can the required radial momentum be transferred to the electron.

Electron emission occurs only at the surface

Researchers expected that the electron's momentum would be preserved parallel to the surface during photoemission, as there are no forces acting in this direction. "Since an electron with a defined angular momentum at the surface has a defined momentum parallel to it, it could be assumed," explains von Issendorff, "that the angular distribution of the electrons corresponds to that of balls simply released by children from a rotating merry-go-round. They do not fly radially outward but tangentially to the circular path." The Freiburg researchers observed just this effect on metal clusters, thus verifying that the electrons indeed can be seen as particles rotating in a box potential and that the electron emission actually does occur only at the surface. The surprise, however, says von Issendorff, is that this observation is completely contradictory to quantum mechanical simulations, which always predict a much more complex behavior dominated by inferences and resonances in the ionization process.

Mathematical description of the angular functions

However, the Freiburg researchers were able to resolve this contradiction: On the basis of their earlier work and in discussions with researchers at the Max Planck Institute for the Physics of Complex Systems in Dresden, they derived a complete mathematical description of the angular functions that corresponds very well to the experiment. The core assumption of this new description is that the cluster is completely non-transparent for electrons: Electrons are strongly decelerated inside the cluster. This leads to a suppression of the interference and resonance effects and thus to an almost classical behavior. It was already known that decoherence suppresses interferences. What is new, however, is that the strong dissipation does not lead to a complete washout of the angular distributions of the electrons but, on the contrary, produces very structured and almost classical distributions.

"We're used to quantum effects predominating at small scales, whereas a classical description is often a good approximation for effects at larger scales," explains von Issendorff.  "Here, classical behavior arises even at a small scale through dissipation. The complicated interplay between a multitude of electrons results in one of these electrons behaving like a classical particle."