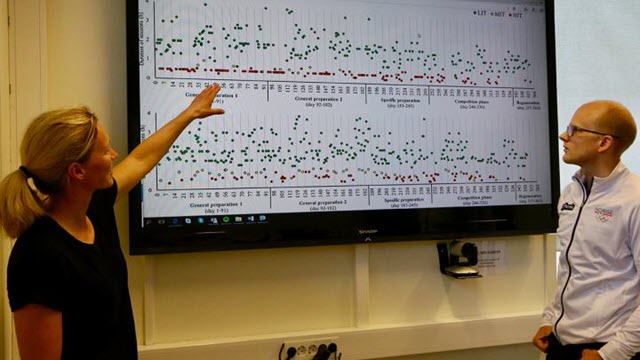 When the Norwegian cross-country skier Marit Bjørgen hung up her skis for the last time in April 2018, she was the winningest winter Olympian ever, with eight Olympic gold medals, 18 world championship titles, and 114 World Cup victories.

Toward the end of her career, she trained roughly 940 hours a year, gave birth to a son, and successfully resumed her career for another two years before retiring at age 38.

As part of her legacy, Bjørgen gave researchers Guro Strøm Solli of Nord University and Norwegian University of Science and Technology (NTNU) and a former xc-ski team member herself, Espen Tønnessen from Kristiania University College in Oslo, and Øyvind Sandbakk, from NTNU's Centre for Elite Sports Research, access to her training logs from 2000 through the end of 2017.

Solli and Sandbakk have already looked at Bjørgen's overall training approach over the years of data they have, and they took a close look at how Bjørgen trained during and after the birth of her son in December 2015.

Now the researchers have drilled down into Bjørgen's training data to examine two different approaches she used to high intensity training (called HIT) during two different parts of her career.

The first approach was block training, where she clustered her HIT sessions into blocks, interspersed with recovery periods with fewer HIT sessions. Later in her career she switched to a traditional model, where HIT sessions are spread more or less evenly throughout a training period.

In both of the training years the researchers looked at, she had great success, winning gold medals and the overall World Cup.

So what can amateur athletes interested in getting the most out of their training sessions, or an elite athlete for whom endurance is a key part of competition, learn from these two training models?

The researchers say both can be used successfully—though perhaps not to the extremes that Bjørgen used them. The real lesson may be that it helps to switch between different approaches, Solli said.

"Often amateur athletes are doing the same thing over and over again," she said "Maybe they could learn something from changing between training models to make more progress?"

High-intensity interval training has been widely recognized as one of the most efficient methods for improving a person's cardiovascular fitness. It involves short periods of high intensity exercise where a person trains hard enough to increase their heartbeat to at least 90 percent of its maximum value, interspersed with short resting periods.

One popular version of this approach is 4×4 intervals, where a person exercises hard for four minutes, followed by a shorter recovery period, repeated for a total of four cycles.

In conjunction with her trainers, the target heart rate for Bjørgen's HIT was set as being between 93 and 98 percent of her maximum heart rate, with intervals between four and seven minutes.

Solli, Tønnessen and Sandbakk were lucky to have so many years of data from Bjørgen, because it allowed them to make comparisons between two different competition years, 2005-2006 and 2014-2015, where her training load was nearly the same, but she used completely different approaches to HIT.

Most importantly, she won world cup races in both years in both sprint and distance races, all of which led to victory in the overall World Cup.

Also, her actual endurance training "load", which is a measure that combines both time spent training and the intensity of the different training sessions, was essentially the same during the two competition years the researchers chose to study.

In 2005-2006, Bjørgen used a block training session approach to structure her HIT, meaning that during her training phase leading up to competition, she performed 7 HIT blocks that lasted between seven and 11 days and that included between eight and 13 HIT sessions.

Typically, Bjørgen trained 5×4, meaning four minutes at high intensity with a two to three minute recovery period, with the whole cycle repeated five times. For all but the most highly trained athletes, the sheer number of high-intensity sessions Bjørgen did during a block would be crushing.

"It is important to be aware that this is an extreme use of the block training approach, and that Marit was at a highly trained state," Solli said.

Bjørgen's block training approach also meant that she had an incredible number of HIT sessions—among the highest of any reported by any elite endurance athletes in the scientific literature, the researchers said.

She also didn't do nearly as much longer, low-intensity training, so she actually spent 200 hours less on training than during the years when she shifted over to a more traditional approach to HIT.

Another reason Bjørgen was able to work with lots of high intensity training was because cross-country ski training allows skiers to switch between different types of training modes.

"That puts different demands on the upper and lower body," Solli said, meaning that Bjørgen could still do a high intensity training session without having to rely exclusively on her legs.

During the HIT blocks, Bjørgen alternated between running, or running with poles, or skate or classic skiing on snow, or roller skiing. Being able to switch makes it easier for an athlete to recover from the intense nature of the sessions, the researchers said.

"This micro-periodization of different exercise modes, with differential loading of the upper and lower body, is likely very important in maintaining the quality of the sessions as well as avoiding muscular fatigue," the researchers wrote.

During the 2014-2015 competition year, Bjørgen relied on a traditional approach to HIT. This meant she kept her amount of moderate and high intensity sessions stable (two to three sessions/week) during the preparation phase for competition.

Typically, the researchers said, the traditional approach means that an athlete relies on a mix of low, moderate and high intensity training, gradually transitioning from high volumes of training—meaning number of hours—to higher training intensity and training that is more specific to the sport the athlete is competing in.

But a potential problem with the traditional approach is that it may create "conflicting physiological adaptations produced by the mixed training of many performance-related factors simultaneously," the researchers say.

Bjørgen had success with both models, so the researchers say it's impossible to conclude which model is "better".

One key to her continued success, regardless of whether she used the block or traditional approach to high intensity training, was that Bjørgen and her trainers made sure that each workout was optimal, and no workout was too taxing.

"Marit always had high-quality sessions," Sandbakk said. "If you are going out on a high-intensity workout, you have to be careful not to go too hard in the beginning of the session, so high speed can be maintained throughout and because too much fatigue can make for longer recovery times. And no matter what model you use, you have to balance your workload with recovery to achieve an optimal adaptation."

One of the pitfalls of high-intensity training is that it can stress your immune system, he said. And if you get sick and continue to push yourself to do high-intensity sessions, you raise your risk of underperforming over time, he said.

Bjørgen was very good, for example, at slowly increasing the intensity of each HIT workout so that once she had reached her optimal heart rate, she could keep it there.

"It's a real skill to get the right intensity—she knows what pace she needs to maintain during high-intensity sessions to have a high-quality session," Solli said.

In the end, though, the real key to success may be changing the way your challenge your body, the two researchers said—and not to overdo it.

"To get progression you need to change something," Sandbakk said. "It's not always that if something works, then more of it is better. That's an important message."