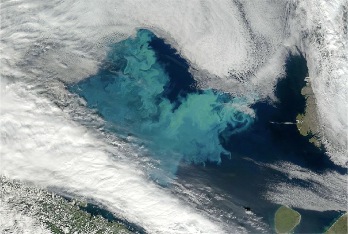 When we talk about global carbon fixation—"pumping" carbon out of the atmosphere and fixing it into organic molecules by photosynthesis—proper measurement is key to understanding this process. By some estimates, almost half of the world’s organic carbon is fixed by marine organisms called phytoplankton—single-celled photosynthetic organisms that account for less than one percent of the total photosynthetic biomass on Earth.

Dr. Assaf Vardi, a marine microbiologist in the Weizmann Institute’s Plant and Environmental Sciences Department, and professor Ilan Koren, a cloud physicist, and Dr. Yoav Lehahn, an oceanographer, both from the Earth and Planetary Sciences Department, realized that by combining their interests, they might be able to start uncovering the role that these minuscule organisms play in regulating the carbon content of the atmosphere.

Tiny as they are, phytoplankton can be seen from space: They multiply in blooms that can reach thousands of kilometers in area, coloring patches of the ocean that can be tracked and measured by satellites. These blooms have a tendency to grow quickly and disappear suddenly. How much carbon does such a bloom fix, and what happens to that carbon when the bloom dies out? That depends, in part on what kills the bloom. If it is mostly eaten by other marine life, for example, its carbon will be passed up the food chain. If the phytoplankton are starved or infected with viruses, however, the process is more complicated. Dead organisms that sink may take their carbon to the ocean floor with them. But others may be scavenged by certain bacteria the in surface waters; these remove the organic carbon and release it back into the atmosphere through their respiration.

Vardi, Koren, and Lehahn asked whether one can use the satellite data to detect the signs of the demise of a bloom due to viral infection, an occurrence that Vardi has investigated in natural oceanic blooms and in the lab. During a recent research cruise near Iceland with colleagues from Rutgers University and Woods Hole Oceanographic Institute, the researchers were able to collect data on the algal-virus interactions and their effect on carbon cycles in the ocean.

By combining satellite data with their field measurements, they were able, for the first time, to measure the effect of viruses on phytoplankton blooms on large, open ocean areas. To do this, the scientists first had to identify a special subset of ocean patches in which such physical processes as currents did not affect the blooms—so they could observe just the biological effects. Then, following a bloom in one of these patches, they managed to trace its whole life cycle. This enabled them to quantify the role of viruses in the demise of this particular bloom. Their conclusions were verified in data collected in a North-Atlantic research expedition.

The scientists estimated that an algal patch of around 1,000 sq km—which forms within a week or two—can fix around 24,000 tons of organic carbon—equivalent to a similar area of rain forest. Since a viral infection can rapidly wipe out an entire bloom, the ability to observe and measure this process from space may greatly contribute to understanding and quantifying the turnover of carbon cycle and its sensitivity to environmental stress conditions, including marine viruses.

- This press release was originally published on the Weizmann Institute website