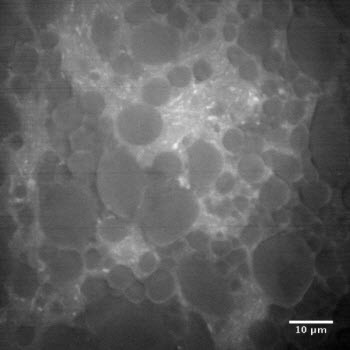 This image, shot via confocal laser scanning microscope, shows how the gluten proteins can be colored with a fluorescent dye so the team can observe the dough structure as an assembly of starch particles within a gluten matrix. The fluorescent dye attaches to gluten proteins so that these light up. Starch particles, on the other hand, remain dark and are easily recognized as the dark spots in a light gluten matrix.Image credit: MeertsNewswise — WASHINGTON, D.C., October 12, 2015 -- The simple act of baking bread has sustained tummies and delighted palates since ancient times, and modern bread-making has become both an industrial-scale venture that defines commercial enterprise as well as a small-batch artisanal movement aimed at filling urban areas with steaming loaves, wherever hipsters sip lattes.

Yet for all our love of the simple slice, we have never had a solid understanding of much of the science behind squishy dough, like the interplay between a dough's microstructure and its rheology -- the way in which it deforms and flows. Understanding this science would help bakers improve bread recipes intended for ovens both big and small.

This month, during The Society of Rheology's 87th Annual Meeting, which is being held Oct. 11-15, 2015 in Baltimore, Md., a team of researchers from Belgium and the Netherlands who really know bread will describe how gluten and starch affect the overall dough behavior, as well as the optimal amount of glucose oxidase enzyme to use to enhance bread-making performance.

"Wheat flour dough consists of a continuous gluten protein phase in which starch particles, lipids and gas cells are all dispersed," explained Mathieu Meerts, a Ph.D. researcher within the Department of Chemical Engineering at KU Leuven, a university in Belgium.

Related article: Consistency is the Key to Success in Bread Baking and Biology

Large disparities often exist in the bread-making performance of wheat flours, which usually gets blamed on the gluten proteins. "When mixed with water, gluten proteins swell and interact to form a gluten network," said Meerts. "This network requires sufficient strength to retain the carbon dioxide gas produced by the yeast during fermentation, which leavens the dough. But the network needs to retain some flexibility because excessive network strength doesn't allow the gas bubbles to expand, which leads to small-volume breads."

So the team searched for ways to optimize the gluten network's properties to "contain long protein molecules for sufficient strength, but also shorter protein chains for flexibility," Meerts noted. Both the quantity and size distribution of the gluten proteins appear to be important.

Baking tests tend to be time consuming, so the food industry has developed alternative tests to quickly assess wheat quality. While generally successful, these tests don't yield fundamental insights into the material's structure or behavior. Meerts and his colleagues took a different approach.

"In our lab, we closely simulate the deformations dough experiences during the bread-making process," Meerts said. "For example, during fermentation and oven rise, the dough is subjected to large extensional deformations. These can also be simulated with empirical tests, but the extension of dough occurs over a long period of time and can't be captured in a fast stretching test."

"Our experiments show that under large deformations — which occur predominantly at the end of the fermentation step and during baking — the gluten network does indeed determine the dough behavior," Meerts said. "Stretching of pure gluten samples yields a response very similar to dough samples. It was also possible to see clear differences in the stretching behavior of flours of different qualities."

So two balls of dough with dramatically different gluten network characteristics might feel surprisingly similar if you kneaded one in each hand on the dough board -- even though one would bake up into a beautiful loaf and the other would fall flat. Testing dough for its "large deformation" characteristics, as the team pioneered, would clearly show the difference.

The team also delved into ways to improve the quality of gluten. The food industry uses the enzyme "glucose oxidase" to catalyze the oxidation of glucose — sugar present in the flour — because its reaction leads to the formation of additional crosslinks within the gluten network.

"This improves the network strength, but lowers its extensibility," said Meerts. "Too much glucose oxidase results in a gluten network that's too strong to rise sufficiently during fermentation. We were able to find the optimal amount of glucose oxidase by exploring the strain-hardening effect of the gluten network."

Think of the strain-hardening effect by picturing the gluten network as an entangled mass of long chains — like spaghetti. "The entanglement points fix the position of the chains at specific locations, but in between the chains are able to move freely," explained Meerts.

When this structure is stretched, the chain segments located between entanglement points will need to be realigned. "Initially, this doesn't require much force," Meerts noted. "But as the system is stretched, more of the realigned chain segments become stretched, which requires more force. This increased resistance to further stretching is called 'strain-hardening,' which only occurs when a material has already been stretched to some extent."

The degree of strain-hardening "shows an optimum for intermediate concentrations of glucose oxidase, and might be a reliable performance indicator," said Meerts. "If so, the food industry can use stretching tests to gain an idea of the degree of strain-hardening of any given flour system, which can be used to predict its bread-making performance."