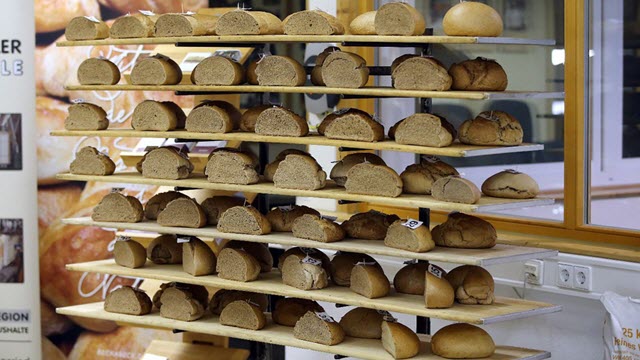 Identical recipes were used to bake breads from different wheat varieties which were then sampled. Already the external appearance of each of the breads varies considerably.Credit: BeckaBeck

In a recent study, scientists compared taste and aroma of different breads baked in close cooperation with an artisan baker and a miller using flour from old as well as modern wheat varieties. In the journal Food Research International, the research team now also describes how it can predict not only the taste but also other characteristics of bread using molecular biological approaches.

Wheat is one of the world's most important agricultural crops. In recent decades, new varieties have been cultivated. Not only are they considerably higher yielding than the older varieties but also less susceptible to pests and changing climatic conditions. In addition to that, their baking characteristics have also been improved.

In the past, the aroma (i.e. smell and taste) of bread baked from wheat flour was never important and therefore not considered during breeding, cultivation, nor was it a decisive factor in trade. One of the reasons for that is that analyzing the aroma of different breads is time-consuming. A comprehensive study has now examined the aroma potential of various old (i.e. released before 2000) and modern wheat varieties using molecular biology methods to predict the aroma.

The study shows how science can successfully be part of and contribute to the value chain. Several institutes at Heinrich-Heine University (HHU) and the University of Hohenheim worked on this research project alongside researchers from Zurich University of Applied Sciences, the Max Planck Institute (MPI) of Molecular Plant Physiology in Golm, as well as the Beck bakery in Römerstein, Stelzenmühle mill in Bad Wurzach, and the District Agricultural Office (Kreislandwirtschaftsamt) in Münsingen.

To be able to compare the different aromas of a total of 40 varieties of wheat, the research team produced doughs from each variety, always using the same recipe, which were then baked. To determine whether potential differences in aroma are attributable to the respective wheat variety or to the location where that particular type of wheat was grown, two breads were baked from each variety: one with wheat grown in Gatersleben and one with wheat grown in Stuttgart-Hohenheim.

The doughs and breads were first compared based on external parameters (dough elasticity, bread size). Test persons next assessed the smell and taste of the breads following a pre-determined procedure. First the testers described in general terms how aromatic—or bland—the bread tasted. In a second step, a detailed assessment was made using the so-called 'Wäderswiler Aromarad.'

Differences in aroma depend on wheat variety and cultivation location

"I am often told that modern varieties produce blander breads than older varieties," explains extraordinary professor Dr. Friedrich Longin from the University of Hohenheim. "We were able to prove that this is not the case. Some of both the old and the modern varieties produced very tasty breads. It is fascinating how the breads differ in taste and aroma depending on the wheat variety we used."

Another noteworthy finding is that the soil in which the wheat was grown has almost as much influence on the baking result and the taste of the bread as the wheat variety used. This reflects varying soil properties as well as different nutritional and mineral contents of the soils, all of which influence the composition of the wheat grains.

"A key aspect of our study is that we have found methods based on molecular markers and the metabolite profiles of the flours which can be used to predict the quality of bread," highlights professor Dr. Benjamin Stich from the Institute of Quantitative Genetics and Genomics of Plants at HHU. Together with the MPI, the HHU researchers determined the metabolic products found in the flour and carried out the statistical analysis to predict the bread characteristics.

This new method brings with it a decisive advantage for plant breeding: In order to breed a new wheat variety to be eventually put on the market, very large numbers of plants—several thousand per year—are regularly produced, all of which must be analyzed to determine their properties. "It would be much too expensive and time-consuming to make breads from all of those plants and to taste them all," explains Stich. With the new method, however, the grower can very quickly distinguish the plants that produce better-quality breads. This way, the number of plants to be included in a final baking test can be reduced considerably.

The Discovery of a New Gene That 'Supervises' Strawberry Ripening

The Discovery of a New Gene That 'Supervises' Strawberry Ripening

Anticipating the Aroma of a Chemical Compound

Anticipating the Aroma of a Chemical Compound