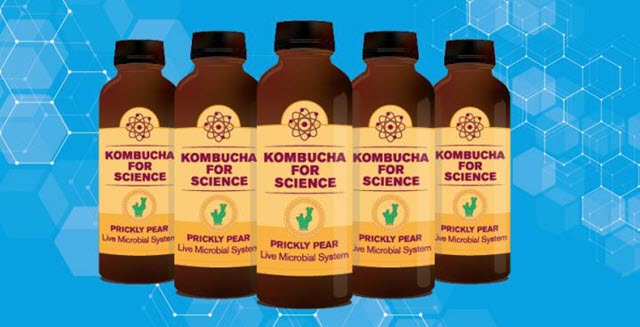 In today's health-conscious community, kombucha is all the rave. Its appeal comes from its accessibility and alleged health benefits, which range from introducing probiotics to killing deleterious bacteria in the human body.

But as is the case for many things in science, there is more to kombucha than meets the eye—literally. The microscopic microbes inhabiting this fermented concoction could offer insight into how microbial communities interact, more specifically on how symbiotic relationships form within complex microbial models.

Athena Aktipis, an assistant professor in the Department of Psychology and associate faculty in the Biodesign Center for Biocomputing, Security and Society, was a fan of kombucha herself, before delving deeper.

"Honestly, I started working on kombucha because I really liked the taste of it. I started brewing it in my kitchen for my own consumption. After brewing it for a couple of months, I would come home from work and just stare at it, asking, 'how do you work.' Being a scientist, I got on Google Scholar to learn more, but I didn't find much."

In response to this, Aktipis teamed up with other researchers to take all the pieces of the puzzle she had found in pre-existing literature and put them together see the bigger picture on how kombucha operates and how the different species of microbes interact and cooperate within.

The paper deconstructed each component of the microbial system, offering insight into how the microbes interact and what resources they utilize as a by-product of the fermentative processes used for making kombucha.

"We think kombucha is important as a model system because it's an easy-to-grow microbial community that can potentially answer interesting questions about cooperation between different species," May said. "Microbes (including the bacteria and yeast in kombucha) actually have a lot of complex social behaviors that scientists are only really starting to learn about. We think that by understanding what's going on at the small scale, we can get clues as to what happens at the larger scale and see if the same patterns even hold true in human societies. People have been eating fermented foods like kombucha for centuries, but it's only recently that scientists have started digging into the systems themselves to understand how and why they can benefit humans."

Although this may seem nothing more than a straightforward recipe for making a tasty refreshment, these fermentative steps actually sustain a wide variety of microbes, illustrating various ecological concepts we usually only see in real-time with non-microscopic organisms.

For example, the yeast found in the kombucha liquid produces invertase, an enzyme that bacteria and yeast use to metabolize sugars, as a public good. Similarly, bacteria produce a biofilm at the top of the batch that protects microbes from outside invaders, provides oxygen, and offers space for the storage of resources. Ethanol and acid, the by-products of fermentation, also keep invaders at bay.

However, there are many systems that have various microbial species at play, so why pick kombucha to illustrate these relationships?

"There is an ease of management that comes from it (because it is easy to make), but it also has a sort of complexity because it contains so many species, and in that way, it is similar to a microbial system you would see in nature," Aktipis said. "It is at this really nice boundary between simplicity and complexity."

Kombucha has proven to be an efficient way to study interspecies interactions on the microbial scale, but it has much more to offer. From this study, Aktipis and collaborators are working on using kombucha as a model to develop interventions for bettering human health.

It has been recently brought into light how important the human microbiome is—the balance of microbes in our bodies, which we have co-evolved with since the dawn of humankind, is pivotal to human health. Throwing that balance off could have significant adverse effects, but treating humans with microbes could restore that balance.

"Right now, we are trying to develop kombucha as a system that could allow us to create new antimicrobial products, which are based on multiple species," Aktipis said. "Whereas drugs are used to kill organisms, we want to ask, 'how can we cultivate a diverse microbial community that can outcompete pathogens.'"

To do this, researchers are taking kombucha and introducing new invaders or removing some chemical or microbial component.

"We are trying to figure out which parts of cooperation in kombucha are most important," Aktipis said. "This paper is the tip of the iceberg of a whole research program we are designing."

These researchers are the first to look into kombucha as a model system—Aktipis says this is a good reminder to be aware of the world around and to never stop asking 'why.'

"There is this tendency in science to only look at things that are already being studied. A lot of what we did with this kombucha project is coming back to the importance of observation, observing the natural world. I think that's been a little bit lost, and it's also much more fun to be aware of your world and to try to understand it."