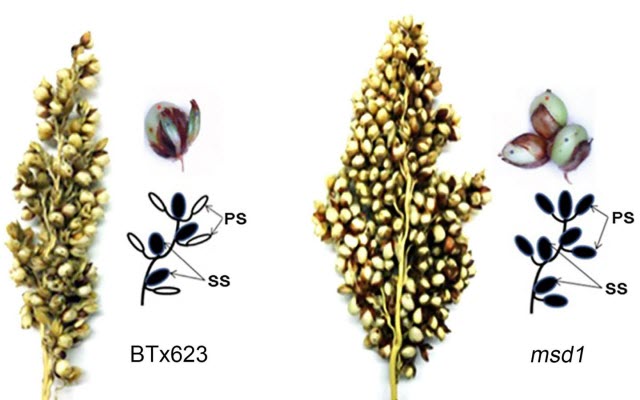 Sorghum grains are produced in clusters of flowers that develop from an elaborately branched structure at the top of the plant called a panicle. Each panicle can produce hundreds of flowers. There are two types of flowers. In the plant one finds in the wild (left), only one of these, the sessile spikelet (SS), is fertile. The other type, pedicellate spikelets (PS), do not make seeds. In a modified version of the plant (right) both sessile and pedicellate spikelets produce seeds, tripling each plants grain number.Image credit: Ware Lab, CSHL

Cold Spring Harbor, NY — A simple genetic modification can triple the grain number of sorghum, a drought-tolerant plant that is an important source of food, animal feed, and biofuel in many parts of the world. In new research reported today (Feb. 26) in Nature Communications, scientists at Cold Spring Harbor Laboratory (CSHL) have figured out how that genetic change boosts the plant's yield: by lowering the level of a key hormone, generating more flowers and more seeds. Their discovery points toward a strategy for significantly increasing the yield of other grain crops.

Doreen Ware, PhD, a CSHL adjunct associate professor and research scientist with USDA's Agricultural Research Service (ARS), led the research, together with ARS colleague Zhanguo Xin, Ph.D. Their study was focused on high-yield strains of sorghum that were generated several years ago by Dr. Xin. An unknown genetic mutation introduced by chemical mutagenesis—a method used for many decades by breeders and researchers to induce genetic variations in plants—resulted in an increase in the number of grains, i.e., seeds contained within fruits, that each plant produced.

Like many cereal crops, sorghum's grains are produced in clusters of flowers that develop from an elaborately branched structure at the top of the plant called a panicle. Each panicle can produce hundreds of flowers. There are two types of flowers, and usually only one of these, known as the sessile spikelet (SS), is fertile. The other flower type, called pedicellate spikelets (PS), do not make seeds. In the modified plants Dr. Xin produced, however, both sessile and pedicellate spikelets produced seeds, tripling each plant's grain number.

Ware and her team wanted to understand what caused this dramatic change. By completely sequencing the genomes of the modified plants, they found that the key mutations affected a gene that regulates hormone production. Plants carrying the mutation produce abnormally low levels of a development-regulating hormone called jasmonic acid, particularly during flower development.

Through subsequent experiments, the team learned that jasmonic acid prevents pedicellate spikelets from producing seeds. "So when the plant hormone is low, we get seeds set on every single one of the flowers. But when the plant hormone is high, we have a reduced number of fertile flowers, ending up in a reduced number of seeds," explains Dr. Yinping Jiao of the Ware lab, co-first author on the new paper.

Now that the team has uncovered the biological changes that triple sorghum's grain production, they hope to apply the same strategy to increase grain production in related plants that are vital in the global food supply, such as rice, corn, and wheat. The knowledge will help guide crop improvement through traditional breeding practices as well as approaches that take advantage of genome editing technologies, Ware says.