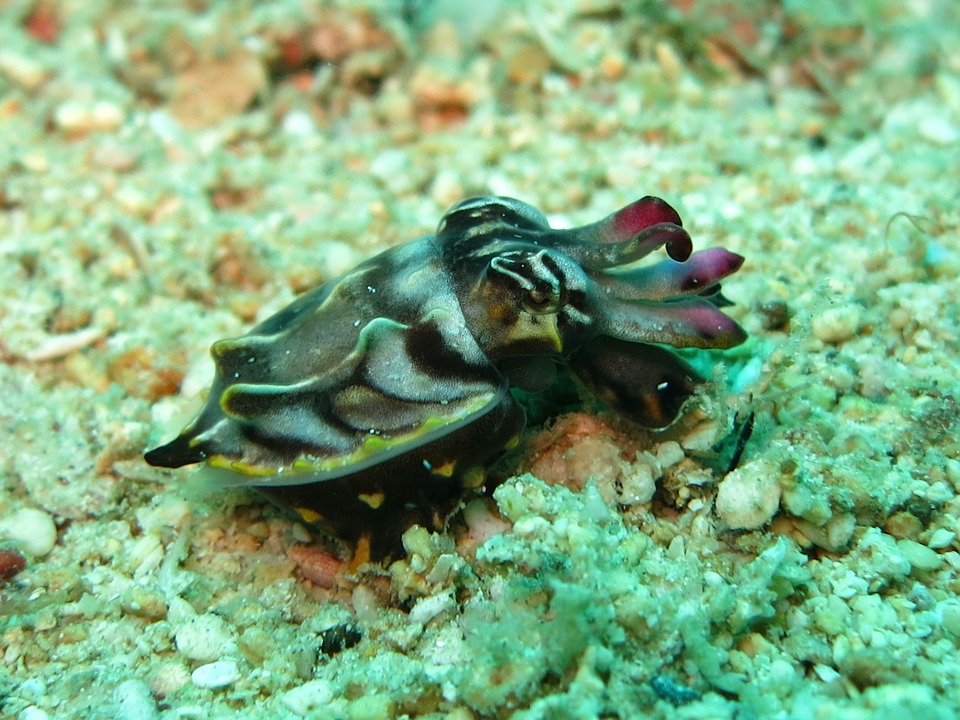 An international team of scientists has identified the neural circuits that enable cuttlefish to change their appearance in just the blink to eye—and discovered that this is similar to the neural circuit that controls iridescence in squids.

Cuttlefish and octopuses are remarkable creatures. They have the ability to change their appearance in a matter of seconds, camouflaging themselves from predators, and enabling them to surprise their prey. However, unlike a number of reptiles and amphibians which merely change colour to blend into their surroundings, these cephalopods are also able to change the physical texture of their skin to match the coarseness of surrounding rocks, coral, or seaweed.

"The sea is full of strange and wondrous creatures, but there are few as bizarre and intelligent as octopuses and cuttlefish," says Dr Trevor Wardill from the Department of Physiology, Development and Neuroscience at the University of Cambridge. "We've seen dozens of examples of these animals suddenly appearing from nowhere, as if they have thrown off an invisibility cloak. How they do this has long remained a mystery."

The skin of these animals is covered in tiny muscular organs known as 'chromatophores' that change colour in response to a signal from the brain. It also has a second set of muscular organs that can be activated to create bumps known as 'papillae'. When stimulated, each papilla can change the texture of the skin from flat to three dimensional. The papillae can serve several functions, including disguise.

Understanding the nervous system of these creatures and how they manipulate their skin has proved challenging, but now a team of scientists from the Marine Biological Laboratory and University of Cambridge has begun to understand how this happens. Their results are published today in the journal iScience.

The researchers found that the instruction signal from the cuttlefish's brain is routed through the stellate ganglion, a peripheral nerve centre. The stellate ganglion houses the giant axon system, so called because it is large enough to see with the naked eye. It also houses particular motor neurons that control the papillae on the mantle (the cuttlefish's outer surface). This nerve circuitry is similar to that by which squids control skin iridescence.

The giant axon system, due to its large size of up to 1mm, helped Nobel prize-winning Cambridge scientists Alan Hodgkin and Andrew Huxley, along with Australian scientist John Eccles, figure out how nerve impulses (action potentials) work.

Dr Paloma Gonzalez-Bellido, also from the University of Cambridge, adds: "This discovery is really interesting from an evolutionary point of view. It opens up the question of which came first: was the common ancestor to cuttlefish and squid able to camouflage themselves using papillae or express iridescence, or possibly both?"

The researcher team—including Lexi Scaros of Dalhousie University and Roger Hanlon of the Marine Biological Laboratory—also looked in greater detail at the papillae to find out how they manage to hold their shape over a long period of time without a signal. They found that the papillae use a mechanism which they describe as being 'catch-like'. It resembles the 'catch' mechanism found in bivalves, such as oysters, mussels, and scallops, which enables the bivalve shell to remain closed without expending much energy.

"There is still a big mystery, however, which is how these animals interpret the world around them and translate this into signals that change their appearance," says Dr Wardill.

The researchers say that understanding how cephalopods' skin changes from a smooth, flat surface to a textured, 3D structure could help in the design of biologically-inspired materials that can themselves be assembled from flat materials.

"This research on neural control of flexible skin, combined with anatomical studies of the novel muscle groups that enable such shape-shifting skin, has applications for the development of new classes of soft materials that can be engineered for a wide array of uses in industry, society, and medicine," adds Professor Roger Hanlon of the Marine Biological Laboratory.