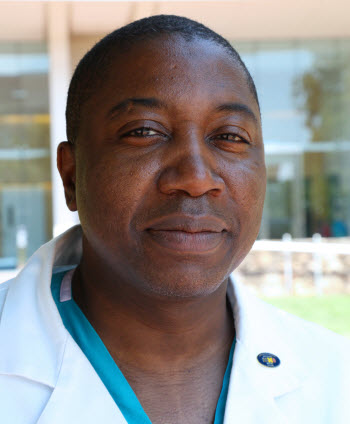 Anthony Charles, MD, MPHPhoto courtesy of the UNC School of MedicineCHAPEL HILL, NC – In the late 1990s, the World Health Organization (WHO) issued a policy requiring the establishment of centralized blood banking facilities in Sub-Saharan African countries. Anthony Charles, MD, MPH, associate professor of surgery at the University of North Carolina at Chapel Hill School of Medicine, says that this policy is now having unintended negative consequences.

In a commentary published in The Lancet, Charles argues that it’s time for the WHO to amend its policy and support the establishment of a hybrid system that maintains centralized services but also allows for transfusion facilities at local and regional hospitals.

The goal of the WHO policy has been to ensure centralized screenings and testing to help eliminate the spread of infectious diseases like HIV. But for Charles, who leads UNC’s Malawian Surgical Initiative, the policy is now a roadblock to the delivery of acute care surgery and obstetrics. Charles’ work in Malawi is based at the Kamuzu Central Hospital in the capital city of Lilongwe. Malawi’s centralized blood bank facility is in Blantyre, nearly 225 miles away.

“If you’re in a car crash and you’re bleeding to death, the blood we need to save your life is often not available locally and delivery is dependent on a centralized facility that may be hundreds of miles away, across a country without mature roads and blood product distribution networks,” Charles said. “We know we are losing patients because of this. We also know that more Africans are dying from trauma than from HIV. It is time for this policy to be amended.”

In a hybrid system, acute crises could be addressed through in-hospital blood banking, with larger centralized facilities maintained for patients with chronic anemia who require regular transfusions.

In addition to ensuring an adequate supply of blood is available for patients at the point of care, this hybrid model would help to mitigate two other issues caused by the policy.

Additionally, centralization has led to an inconsistent supply of blood that can sometimes reach dangerously reduced levels. Many of these blood banks are located in major cities and rely on college students as volunteer donors. During the portions of the year when university is not in session, the supplies can get critically low.

The amount of donation from patient family members has also dropped by half since 2004.

“If a physician tells a family member to donate their blood in order to save their loved one, they have great incentive to do it,” Charles said. “Under the current policy we have to say ‘if you donate your blood, we have to ship it off to another facility for testing and there’s no way to guarantee that your relative will actually receive any blood.’ Obviously less people are interested in that.”

Under the proposed hybrid system, patients and families would be tested on site and the blood would then be immediately available for transfusion. In the long term, Charles also hopes that people who see the impact on their own families will be more likely to become repeat donors.

Charles said many of the larger hospitals in Sub-Saharan Africa already have the lab facilities and personnel to adequately test and ensure that blood is safe for transfusion, and the establishment of this hybrid system can be done relatively quickly and at a reasonable cost by utilizing the infrastructure already in place.

“The establishment of the current policy was commendable and well-intentioned, but the time has come to change the policy and allow for greater flexibility,” Charles said. “The hybrid model will allow us to maintain testing and infection control protocols, reduce costs, increase and stabilize the supply, and, most importantly, save lives.”

The research was funded by the North Carolina Jaycee Burn Center and the UNC Department of Surgery.

Read more about Charles and the Malawian Surgical Initiative.