Researcher and breeder Brick in a bean field. hoto credit: Barry Ogg, Colorado State UniversityPinto beans are the most common type of bean cultivated in the United States, accounting for more than a third of all edible, dry bean production. Harvesting them, however, has been a complicated ordeal–until now.

Long’s Peak combines upright architecture with high yields, excellent seed color and weight, and resistance to several diseases such as common rust.The upright architecture of Long’s Peak makes it faster and cheaper to harvest. Traditionally, US pinto varieties have “prostrate” architecture. “They would grow upright initially; then mid-season, when they started to show pods, they would vine out and grow horizontally along the ground,” says Brick.

Harvesting prostrate beans is a complex process. Harvesters cut the bean plants below the ground, pull them out, and lay them on the field to dry in piled rows. Finally, combine harvesters are used to thresh and harvest the dried beans.

“Each step in this harvesting process has the potential to decrease yields by shattering of the bean seeds,” says Brick. Additionally, while beans are drying in the fields they remain exposed to the weather, which can discolor seeds, damage yields or even ruin the crop completely.

Bean plants with upright architecture, such as Long’s Peak, can be direct-harvested using a combine-harvester. This one-step harvesting process saves time and fuel. It also increases yield by reducing shattering of bean seeds, and reduces the risk of damage through exposure to adverse weather. 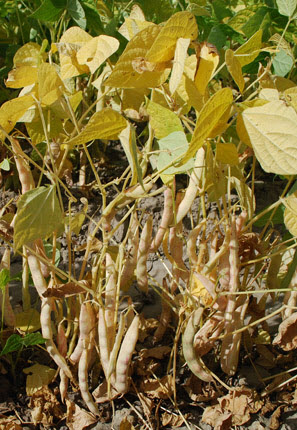 Breeding an upright pinto meant using the best of bean worlds. “We had to make crosses between the upright, tropical types with small seeds and the large-seeded highland varieties,” says Brick.

While the initial crosses yielded some plants with upright architecture, breeders had difficulties with seed size.

“Seed size is a vital feature of how marketable a bean variety is,” says Brick.

Researchers used a process called recurrent selection, where they continued to interbreed the upright plants with small seeds and select the offspring with the largest seeds for the next breeding cycle.

“Each generation of intercrossing, you can slowly make progress not only on seed size and upright architecture, but other traits such as yield and disease resistance,” says Brick.

Long’s Peak has been a long time in the making. Brick, and other researchers across the U.S., have been working for more than three decades to generate upright pinto beans with large seeds, high yield, good color, and pest resistance. “Plant breeders are patient people,” says Brick, “and as long as we see a tiny bit of progress, we persevere.”

Geography and weather play a role in growers’ bean selection. More than 70 percent of the bean crop in Michigan consists of upright varieties. “Where the risk of rain during harvest is relatively low, such as Colorado, growers have been have been slower in switching to upright varieties,” says Brick.

Brick continues to work on breeding bean varieties with increased disease resistance, higher yields, and more nutritional value. “Pulse crops, such as beans, are highly associated with health in people and we need to eat more of them,” he says.

Dry beans are a nutrient-dense food and a vital source of protein in large parts of the developing world. Beans also provide dietary fiber, which aids in maintaining digestive health and offers protection from developing certain kinds of cancer. Consumption of beans brings other health benefits, such as lowered blood cholesterol levels and reduced obesity.

Dried beans are part of a food group known as pulses. The United Nations Food and Agriculture Organization declared 2016 the International Year of Pulses (IYP). In celebration, the Crop Science Society of America (CSSA) created a web page for the public about pulses, www.crops.org/iyp. Special tabs for the public include K-12 Education, Beans in the News, Grown Your Own, and Delicious Ideas. CSSA has also compiled links to various recipes, so you can increase your consumption of pulses.

CSSA will release more information about pulses during the 2016 IYP celebration.

Read more about the new Long’s Peak variety in Journal of Plant Registrations.