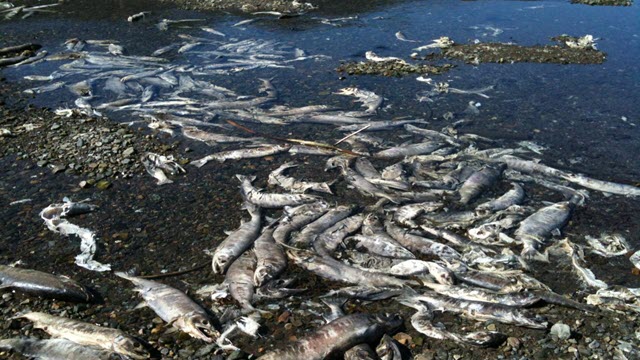 What if roadkill piled beside the road and never decomposed? What if massive fish kills washed up on beaches and remained for eternity?

First off, it would be disgusting. Second, the Earth might run out of the key elements these organisms contain.

Thanks to a new study by Michigan State University, scientists now have a better way to investigate decomposing plants' and animals' contributions to the ecosystem. This necrobiome, the collective organisms both big and small that helps plants and animals decay, was first defined in 2013 by Eric Benbow, MSU forensic entomologist and microbial ecologist, who led the study. Together with his collaborators, they established a baseline of organisms that play key roles in carrion decomposition.

The paper, published in the current issue of the journal Ecological Monographs, establishes the necrobiome encyclopedia to bridge different aspects of ecological theory and also promote the importance of death in ecosystems. The research also effectively establishes the same framework to examine decaying plant and animal communities while acknowledging their key differences and mechanisms.

This detailed study covers the spectrum of decomposition processes, from decaying seaweed to a catastrophe, such as an entire animal herd dying en masse, Benbow said.

"Decomposer communities are critical, yet there's no standard framework to conceptualize their complex and dynamic interactions across both plant and animal necromass, which limits our comprehensive understanding of decomposition," he said. "Our findings also have implications for defining and testing paradigms related to nutrient recycling, gene flow, population dynamics and other ecosystem processes at the frontier of ecological research."

Discovering how decomposition communities interact with each other and how they drive nutrient and carbon cycling could lead to fundamental shifts in ecosystem science, Benbow added.

A recent New York Times article featured an area's transformation when lightning killed 300 reindeer in Norway. The carcasses drew carnivores, birds, maggots, and microbes. Jen Pechal, MSU forensic entomologist and microbial ecologist, who was quoted in the article, called the Norwegian site a hyperlocal "decomposition island," which created massive diversity in a short span of time.

One change in the area resulted in greater plant diversity. Birds feasting on the carrion dropped feces filled with crowberry seeds. The reindeer remains created the perfect soil for crowberry seedlings—an important food source for many animals in the region—to flourish.

Promoting the necrobiome lexicon in the scientific community also can open the door for new areas of research. Take, for example, the two seemingly unrelated concepts of distilling liquor and food security. Distilleries generate mash as a waste product. Rather than seeing a waste byproduct that needs to be disposed, entrepreneurs could view the mash through a lens of new product development.

There are insects that thrive on decaying mash, consuming and converting it, and then they can be dried and transformed into animal feed. Or, in many countries outside the US, the insects themselves could be processed for human consumption.

"Our research and this study establish a common language and conceptual tools that can lead to new product discovery," Benbow said. "We're eliminating organic matter and turning it into a value-added product that can add to the world-food cycle. Understanding the species and the mechanisms, which are essentially recycled, can contribute to establishing food security."