A specimen of the new species, Mariana snailfish.Photo Source: Mackenzie Gerringer/University of Washington

The ocean's deepest fish doesn't look like it could survive in harsh conditions thousands of feet below the surface. Instead of giant teeth and a menacing frame, the fishes that roam in the deepest parts of the ocean are small, translucent, bereft of scales -- and highly adept at living where few other organisms can.

"This is the deepest fish that's been collected from the ocean floor, and we're very excited to have an official name," said lead author Mackenzie Gerringer, a postdoctoral researcher at the University of Washington's Friday Harbor Laboratories. "They don't look very robust or strong for living in such an extreme environment, but they are extremely successful."

Snailfish are found at many different depths in marine waters around the world, including off the coast of San Juan Island, where Gerringer is continuing research on the family of fish. In deep water, they cluster together in groups and feed on tiny crustaceans and shrimp using suction from their mouths to gulp prey. Little is known about how these fish can live under intense water pressure; the pressure at those depths is similar to an elephant standing on your thumb.

This new species appears to dominate parts of the Mariana Trench, the deepest stretch of ocean in the world that is located in the western Pacific Ocean. During research trips in 2014 and 2017, scientists collected 37 specimens of the new species from depths of about 6,900 meters (22,600 feet) to 8,000 meters (26,200 feet) along the trench. DNA analysis and 3-D scanning to analyze skeletal and tissue structures helped researchers determine they had found a new species.

Since then, a research team from Japan has recorded footage of the fish swimming at depths of 8,178 meters (26,830 feet), the deepest sighting so far.

"Snailfishes have adapted to go deeper than other fish and can live in the deep trenches. Here they are free of predators, and the funnel shape of the trench means there's much more food," said co-author Thomas Linley of Newcastle University. "There are lots of invertebrate prey and the snailfish are the top predator. They are active and look very well-fed." 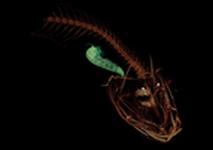 This is a CT scan of the Mariana snailfish. The green shape, a small crustacean, is seen in the snailfish's stomach.Photo Source: Adam Summers/University of Washington

A handful of researchers have explored the Mariana Trench, but few comprehensive surveys of the trench and its inhabitants have been completed because of its depth and location, Gerringer explained. These research trips, conducted while Gerringer completed her doctorate at University of Hawai'i at Manoa, involved dropping traps with cameras down to the bottom of the trench. It can take four hours for a trap to sink to the bottom.

After waiting an additional 12 to 24 hours, the researchers sent an acoustic signal to the trap, which then released weights and rose to the surface with the help of flotation. That allowed scientists to catch fish specimens and take video footage of life at the bottom of the ocean.

"There are a lot of surprises waiting," Gerringer said. "It's amazing to see what lives there. We think of it as a harsh environment because it's extreme for us, but there's a whole group of organisms that are very happy down there."

Footage from the 2014 research cruise on R/V Falkor will also run in the BBC's "Blue Planet II" series, which is now airing in the U.K. The research team also filmed another new species on this cruise, the ethereal snailfish, living at great depths in the Mariana Trench. The Mariana snailfish's location was its most distinguishing characteristic, but researchers also saw a number of differences in physiology and body structure that made it clear they had found a new species. With the help of a CT scanner at the UW's Friday Harbor Laboratories, the researchers could look in close digital detail to study elements of the fish.

The authors acknowledge the broad collaboration needed for deep-sea science, particularly in this discovery, and decided the new fish's scientific name should reflect that collaborative effort. The fish is named after a sailor, Herbert Swire, an officer on the HMS Challenger expedition in the late 1800s that first discovered the Mariana Trench.