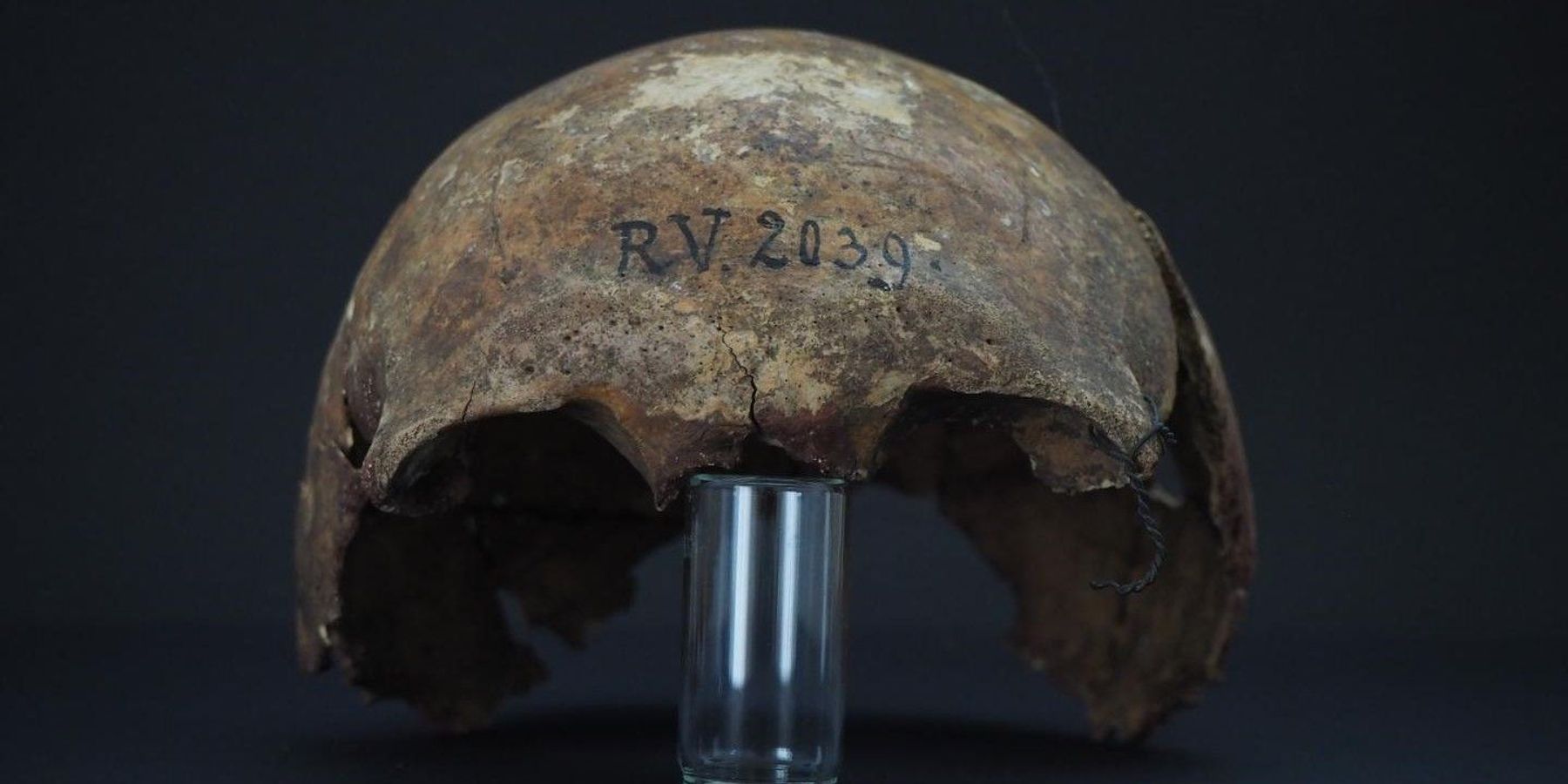 This image shows the skull bones of the man buried in Latvia, around 5,000 years ago.
Dominik Göldner, BGAEU, Berlin

The oldest strain of Yersinia pestis—the bacteria behind the plague that caused the Black Death, which may have killed as much as half of Europe's population in the 1300s—has been found in the remains of a 5,000-year-old hunter-gatherer. A genetic analysis published June 29 in the journal Cell Reports reveals that this ancient strain was likely less contagious and not as deadly as its medieval version.

"What's most astonishing is that we can push back the appearance of Y. pestis 2,000 years farther than previously published studies suggested," says senior author Ben Krause-Kyora, head of the ancient DNA (aDNA) Laboratory at the University of Kiel in Germany. "It seems that we are really close to the origin of the bacteria."

The plague carrying hunter-gatherer was a 20- to 30-year old man called "RV 2039." He was one of two people whose skeletons were excavated in the late 1800s in a region called Rinnukalns in present-day Latvia. Soon after, the remains of both vanished until 2011, when they reappeared as part of German anthropologist Rudolph Virchow's collection. After this rediscovery, two more burials were uncovered from the site for a total of four specimens, likely from the same group of hunter-fisher-gatherers.

Krause-Kyora and his team used samples from the teeth and bone of all four hunter-gatherers to sequence their genomes and then tested them for bacterial and viral pathogens. They were surprised to find evidence of Y. pestis in RV 2039—and after reconstructing the bacteria's genome and comparing it to other ancient strains, the researchers determined that the Y. pestis RV 2039 carried was indeed the oldest strain ever discovered. It was likely part of a lineage that emerged about 7,000 years ago, only a few hundred years after Y. pestis split from its predecessor, Yersinia pseudotuberculosis.

"What's so surprising is that we see already in this early strain more or less the complete genetic set of Y. pestis, and only a few genes are lacking. But even a small shift in genetic settings can have a dramatic influence on virulence," says Krause-Kyora.

In particular, this ancient strain lacked one crucial thing: the gene that first let fleas act as vectors to spread the plague. This gene was responsible for efficient transmission of the bacterium to human hosts, which resulted in the growth of the infamously grotesque pus-filled buboes in the sick associated with the medieval bubonic plague. Flea-based transmission also required the death of the human host, which means that the appearance of the gene could have driven the evolution of a deadlier disease.

From RV 2039, it likely took more than a thousand years for Y. pestis to acquire all the mutations needed for flea-based transmission. And it's not clear to what extent RV 2039 experienced the effects of the plague at all.

Y. pestis was found in his bloodstream, meaning he most likely died from the bacterial infection—although, the researchers think the course of the disease might have been fairly slow. They observed that he had a high number of bacteria in his bloodstream at his time of death, and in previous rodent studies, a high bacterial load of Y. pestis has been associated with less aggressive infections. Additionally, the people he was buried near were not infected and RV 2039 was carefully buried in his grave, which the authors say also makes a highly contagious respiratory version of the plague less likely.

Instead, this 5,000-year-old strain likely was transmitted directly via a bite from an infected rodent and probably didn't spread beyond the infected person. "Isolated cases of transmission from animals to people could explain the different social environments where these ancient diseased humans are discovered. We see it in societies that are herders in the steppe, hunter-gatherers who are fishing, and in farmer communities—totally different social settings but always spontaneous occurrence of Y. pestis cases," says Krause-Kyora.

These conclusions—that the early form of Y. pestis likely was a slow-moving disease and wasn't very transmissible—challenge many theories about the development of human civilization in Europe and Asia. For example, some historians have suggested that infectious diseases like Y. pestis evolved mostly in megacities of over 10,000 people near the Black Sea. However, 5,000 years ago—the age of RV 2039's strain—was long before the formation of large cities. Instead, agriculture was just beginning to appear in Central Europe, and populations were much sparser.

This timeline, plus the less contagious and deadly nature of this early Y. pestis strain, also contradicts the hypothesis that Y. pestis led to the large population declines in Western Europe at the end of the Neolithic Age.

The authors say that examining the history of Y. pestis could also potentially shed light on human genomic history. "Different pathogens and the human genome have always evolved together. We know Y. pestis most likely killed half of the European population in a short time frame, so it should have a big impact on the human genome," says Krause-Kyora. "But even before that, we see major turnover in our immune genes at the end of the Neolithic Age, and it could be that we were seeing a significant change in the pathogen landscape at that time as well."

- This press release was provided by Cell Press