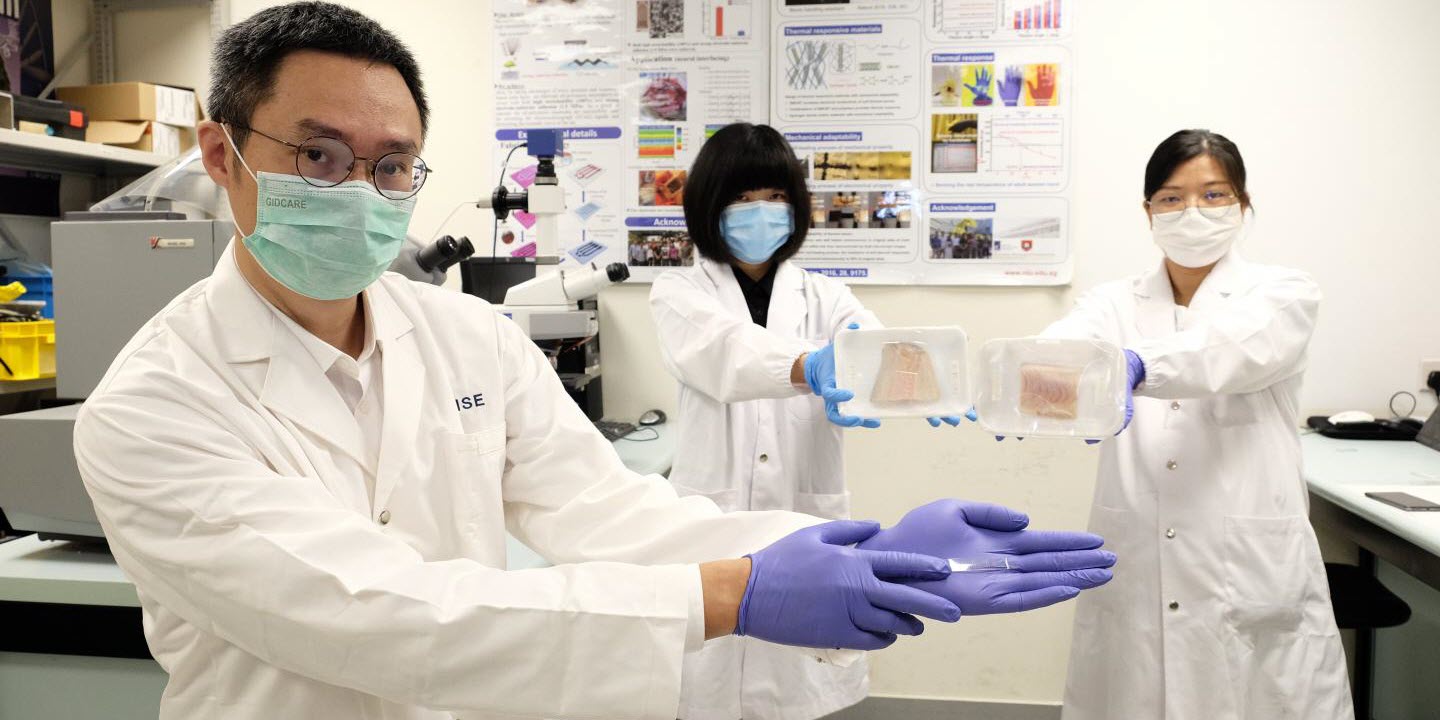 A team of scientists led by Nanyang Technological University, Singapore (NTU Singapore) has invented an artificial olfactory system that mimics the mammalian nose to assess the freshness of meat accurately.

The "electronic nose" (e-nose) comprises a "barcode" that changes color over time in reaction to the gases produced by meat as it decays, and a barcode 'reader' in the form of a smartphone app powered by artificial intelligence (AI). The e-nose has been trained to recognize and predict meat freshness from a large library of barcode colors.

When tested on commercially packaged chicken, fish, and beef meat samples that were left to age, the team found that their deep convolutional neural network AI algorithm that powers the e-nose predicted the freshness of the meats with a 98.5 percent accuracy. As a comparison, the research team assessed the prediction accuracy of a commonly used algorithm to measure the response of sensors like the barcode used in this e-nose. This type of analysis showed an overall accuracy of 61.7 percent.

The e-nose, described in a paper published in the scientific journal Advanced Materials in October, could help to reduce food wastage by confirming to consumers whether meat is fit for consumption, more accurately than a "Best Before" label could, said the research team from NTU Singapore, who collaborated with scientists from Jiangnan University, China, and Monash University, Australia.

Co-lead author and professor Chen Xiaodong, the director of Innovative Centre for Flexible Devices at NTU, said: "Our proof-of-concept artificial olfactory system, which we tested in real-life scenarios, can be easily integrated into packaging materials and yields results in a short time without the bulky wiring used for electrical signal collection in some e-noses that were developed recently.

These barcodes help consumers to save money by ensuring that they do not discard products that are still fit for consumption, which also helps the environment. The biodegradable and non-toxic nature of the barcodes also means they could be safely applied in all parts of the food supply chain to ensure food freshness."

A patent has been filed for this method of real-time monitoring of food freshness, and the team is now working with a Singapore agribusiness company to extend this concept to other types of perishables.

A nose for freshness

The e-nose developed by NTU scientists and their collaborators comprises two elements: a colored "barcode" that reacts with gases produced by decaying meat; and a barcode "reader" that uses AI to interpret the combination of colors on the barcode. To make the e-nose portable, the scientists integrated it into a smartphone app that can yield results in 30 seconds.

The e-nose mimics how a mammalian nose works. When gases produced by decaying meat bind to receptors in the mammalian nose, signals are generated and transmitted to the brain. The brain then collects these responses and organizes them into patterns, allowing the mammal to identify the odor present as meat ages and rots.

In the e-nose, the 20 bars in the barcode act as the receptors. Each bar is made of chitosan (a natural sugar) embedded on a cellulose derivative and loaded with a different type of dye. These dyes react with the gases emitted by decaying meat and change color in response to the different types and concentrations of gases, resulting in a unique combination of colors that serves as a "scent fingerprint" for the state of any meat.

For instance, the first bar in the barcode contains a yellow dye that is weakly acidic. When exposed to nitrogen-containing compounds produced by decaying meat (called bioamines), this yellow dye changes into blue as the dye reacts with these compounds. The color intensity changes with an increasing concentration of bioamines as meat decays further.

For this study, the scientists first developed a classification system (fresh, less fresh, or spoiled) using an international standard that determines meat freshness. This is done by extracting and measuring the amount of ammonia and two other bioamines found in fish packages wrapped in widely-used transparent PVC (polyvinyl chloride) packaging film and stored at 4°C (39°Fahrenheit) over five days at different intervals.

They concurrently monitored the freshness of these fish packages with barcodes glued on the inner side of the PVC film without touching the fish. Images of these barcodes were taken at different intervals over five days. 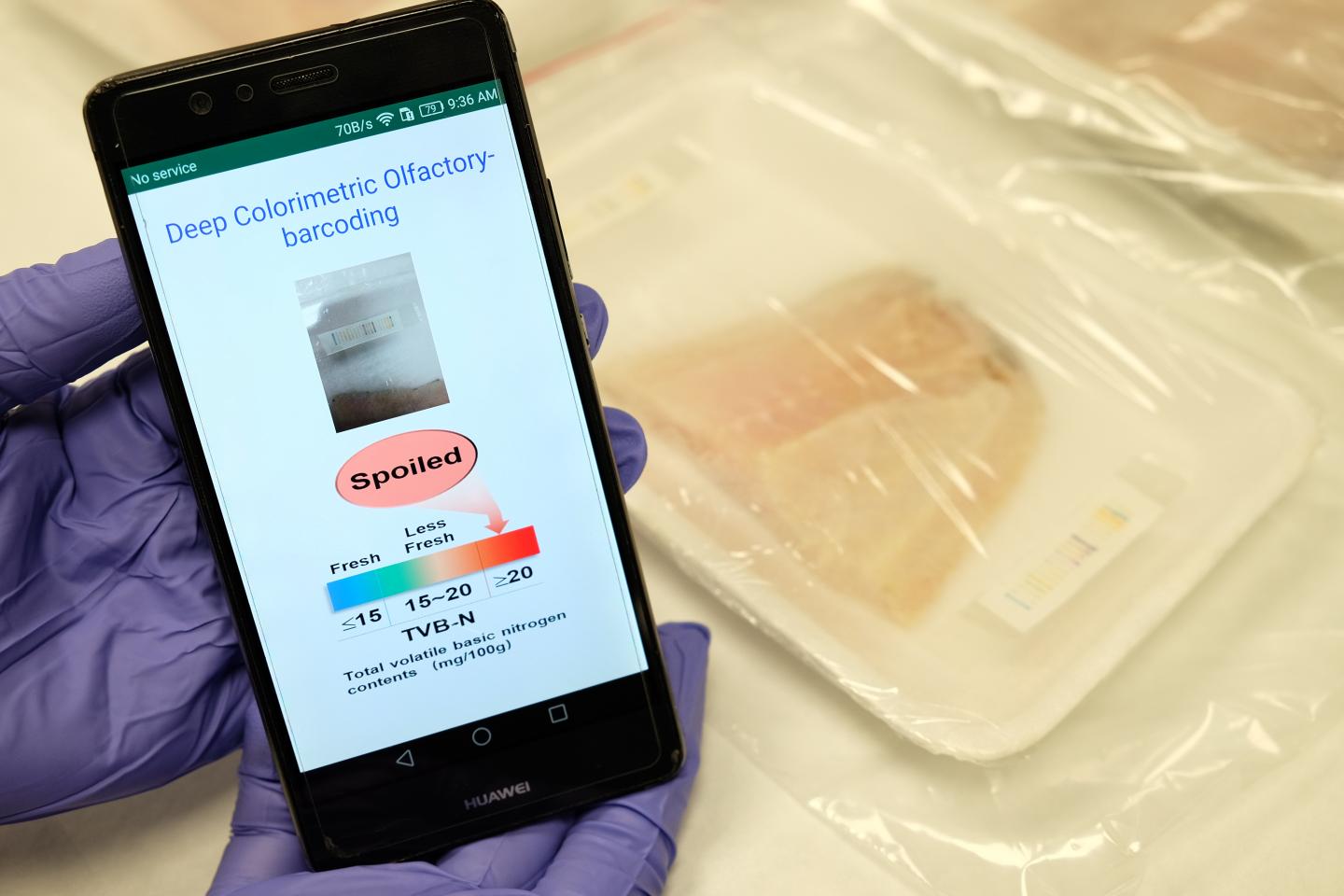 The electronic nose (e-nose) comprises a barcode that changes color over time in reaction to the gases produced by meat as it decays, and a barcode reader in the form of a smartphone app powered by artificial intelligence (AI). The e-nose has been trained to recognize and predict meat freshness from a large library of barcode colors.
NTU Singapore

A type of AI algorithm known as deep convolutional neural networks was then trained with images of different barcodes to identify patterns in the scent fingerprint that correspond to each category of freshness.

To gauge the prediction accuracy of their e-nose, the NTU scientists then monitored the freshness of commercially packed chicken, fish, and beef with barcodes glued on the packaging film, and stored at 25°C (77°Fahrenheit). Over 4,000 images of the barcodes from six meat packages were taken at different time intervals over 48 hours without opening the different meat packages.

The research team first trained their system to pick out patterns among the scent fingerprints captured in 3,475 barcode images, before testing the system's accuracy on the remaining images.

As a comparison, the research team randomly selected 20 barcode images from each freshness category to assess the prediction accuracy of Euclidean distance analysis, a commonly used method to measure the response of sensors like the barcode used in this e-nose. This analysis showed an overall accuracy of 61.7 per cent.

Chen, President's Chair Professor in Materials Science and Engineering at NTU, said: "While e-noses have been extensively researched, there are still bottlenecks to their commercialization due to current prototypes' issues with accurately detecting and identifying the odor. We need a system that has both a robust sensor setup and a data analysis method that can accurately predict scent fingerprints, which is what our e-nose offers.

"Its non-destructive, automated and real-time monitoring capability could also be used to recognize the types of gases that other types of perishable food emit as they become less fresh, providing a broadly applicable new platform for food quality control, which is what we are working towards now."

- This press release was originally published on the NTU Singapore website