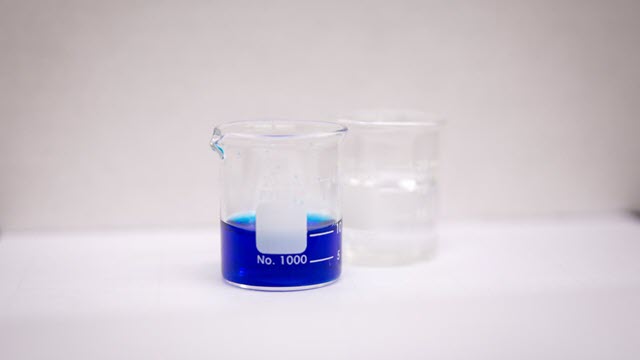 A sapphire-colored dye called methylene blue is a common ingredient in wastewater from textile mills.

But University at Buffalo scientists think it may be possible to give this industrial pollutant a second life. In a new study, they show that the dye, when dissolved in water, is good at storing and releasing energy on cue.

This makes the compound a promising candidate material for redox flow batteries—large, rechargeable liquid-based batteries that could enable future wind farms and solar homes to stockpile electricity for calm or rainy days.

The research appeared online on Aug. 13 in the journal ChemElectroChem.

"Methylene blue is a widely used dye. It can be harmful to health, so it's not something you want to dump into the environment without treating it," says lead researcher Timothy Cook, PhD, assistant professor of chemistry in the UB College of Arts and Sciences. "There's been a lot of work done on ways to sequester methylene blue out of water, but the problem with a lot of these methods is that they're expensive and generate other kinds of waste products."

"But what if instead of just cleaning the water up, we could find a new way to use it? That's what really motivated this project," says first author Anjula Kosswattaarachchi, a UB PhD student in chemistry.

The study is just the first step in assessing how—and whether—methylene blue from industrial wastewater can be used in batteries.

"For this to be practical, we would need to avoid the costly process of extracting the dye from the water," Cook says. "One of the things we're interested in is whether there might be a way to literally repurpose the wastewater itself.

"In textile-making, there are salts in the wastewater. Usually, to make a redox flow battery work, you have to add salt as a supporting electrolyte, so the salt in wastewater might be a built-in solution. This is all speculative right now: We don't know if it will work because we haven't tested it yet."

What Cook and Kosswattaarachchi have shown—so far—is that methylene blue is good at important tasks associated with energy storage. In experiments, the scientists built two simple batteries that employed the dye—dissolved in salt water—to capture, store and release electrons (all crucial jobs in the life of a power cell).

The first battery the researchers made operated with near-perfect efficiency when it was charged and drained 50 times: Any electrical energy the scientists put in, they also got out, for the most part.

Over time, however, the battery's capacity for storing energy fell as molecules of methylene blue became trapped on a membrane critical to the device's proper function.

Choosing a new membrane material solved this problem in the scientists' second battery. This device maintained the near-perfect efficiency of the first model, but had no notable drop in energy storage capacity over 12 cycles of charging and discharging.

The results mean that methylene blue is a viable material for liquid batteries. With this established, the team hopes to take the research one step further by obtaining real wastewater from a textile mill that uses the dye.

"We'd like to evaporate the wastewater into a more concentrated solution containing the methylene blue and the salts, which can then be tested directly in a battery," Cook says.

In Sri Lanka's textile industry, a personal connection to the study

The project is important to Kosswattaarachchi from a personal standpoint: Before coming to UB, she worked in textiles, developing new fabric technologies for the Sri Lanka Institute of Nanotechnology (SLINTEC).

Textiles are one of the country's most important economic sectors, and the industry creates many jobs. But pollution is a downside, with wastewater an environmental concern.

"We believe that this work could set the stage for an alternative route for wastewater management, paving a path to a green-energy storage technology," Kosswattaarachchi says.