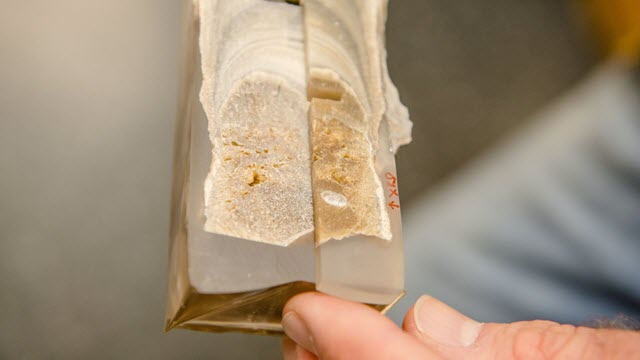 Just like a tree has annual rings, a dripstone has a lamination that develops over time when the dripstone grows under different environmental conditions.Credit: RUB, Marquard

In the last interglacial period on Earth about 125,000 years ago, the Indian monsoon was longer, more extreme and less reliable than it is today. This is the conclusion drawn by geoscientists from Ruhr-Universität Bochum (RUB) and the University of Oxford, together with other colleagues from the UK, New Zealand, China, and the US. The team analyzed a dripstone from a cave in northeastern India, combining various methods that provide information about supra-regional and local weather phenomena and the climate dynamics of the past.

Last and next interglacial period

"The last interglacial period is often considered an analogy to the expected climate changes," says Ola Kwiecien from the RUB Institute of Geology, Mineralogy and Geophysics. "Even though the factors that led to the warming were different then than they are today, of course." Findings about weather and climate phenomena from the last interglacial period provide researchers with clues as to how the climate might change as the earth warms up.

The team analyzed a dripstone from the Mawmluh Cave in northeastern India. For one, the researchers determined so-called delta-18-O values, which are a measure of the strength of the Indian monsoon. In the process, they compared the ratio of heavy and light oxygen in the dripstone; this depends on the one hand on the source area of the monsoon, but also on the seasonal distribution of rainfall, temperature, and intensity of precipitation. These factors play an important role for the strength of the monsoon weather phenomenon.

Relevant for farmers in the region

"The delta-18-O value tells us something about the strength of the monsoon, but not how much precipitation falls and how the rain spreads over time," explains Sebastian Breitenbach from the RUB Institute of Geology, Mineralogy and Geophysics. "But that is in fact the crucial information," adds Ola Kwiecien. "For a farmer, it makes a big difference whether precipitation falls constantly and reliably over a certain period of time, or whether surprising and extreme rainfall alternates with longer dry periods."

In order to gather clues on the seasonal distribution of rainfall, the researchers defined additional measured values. While the delta-18-O value is a supra-regional parameter that tells them something about the distant sources of monsoon rainfall, other parameters record local phenomena, including the ratio of different elements such as strontium or magnesium to calcium or the ratio of different calcium isotopes in the dripstone. This isotope ratio, known as the delta-44-Ca value, has so far rarely been applied to cave samples.

Precipitation in the vicinity of the cave

During dry winter and longer dry periods, a phenomenon occurs in the karst rock above the cave that affects the elemental conditions in the dripstone. If rain falls over the Mawmluh Cave, it seeps through the soil, dissolves calcium from the rock and transports it into the cave. The calcium is stored in a dripstone formed by the water; the dripstone, which grows during a moist phase, thus has a high calcium content compared to other elements.

However, during the dry period between November and May, some of the calcium can get lost on the way, if there are any air-filled cavities in the rock. These cause calcium to precipitate before it reaches the cave, while elements such as strontium and magnesium remain in the water, are transported to the dripstones and integrated into them. The ratio of magnesium or strontium to calcium in the dripstone thus indicates whether there was much or little rain in the immediate vicinity of the cave. The delta-44-Ca value also provides clues on the precipitation near the cave and, moreover, allows researchers to gain more information on the intensity of the dry phase.

The combination of these different parameters enabled the researchers to reconstruct changes in precipitation during the monsoon and non-monsoon periods and, consequently, to gain insight into the distribution of precipitation before, during, and after the last interglacial period.

"On the whole, our data show that the Indian monsoon was less reliable in the last interglacial period than it is today, which suggests that global warming today might be having the same effect," concludes Ola Kwiecien. "This tallies with the tendency for weather extremes to become more frequent." According to the researchers, human impact on the climate in the Indian summer monsoon has not yet fully manifested itself. If the assumptions underlying the current study are correct, however, this could change in the next 20 to 30 years.