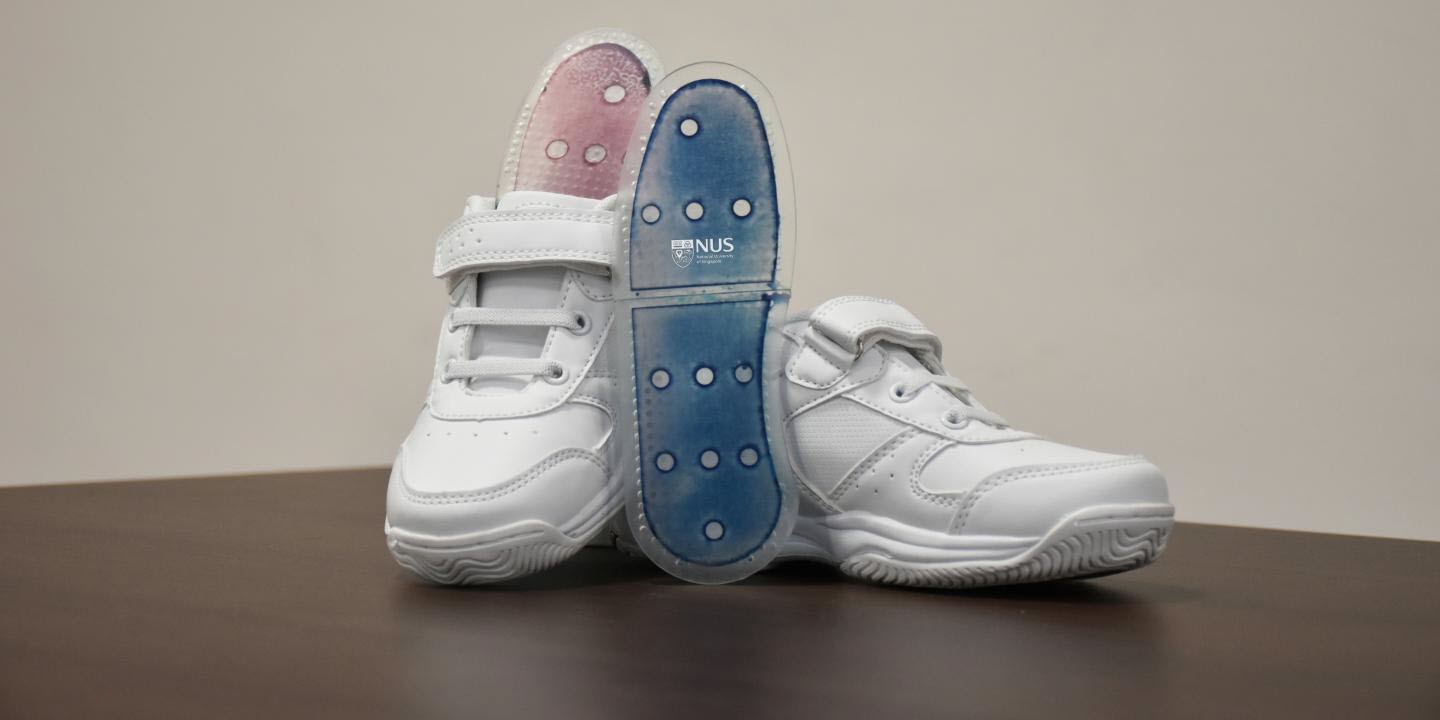 A team of researchers from the National University of Singapore invented a novel thin film that evaporates sweat six times faster and holds 15 times more moisture than conventional materials. In this prototype, the insole coated with the novel thin film turns from blue to pink as it absorbs moisture. The insole can be easily "regenerated" by putting it out in the sun, and be reused more than 100 times.
National University of Singapore

A team of researchers from the National University of Singapore (NUS) has created a novel film that is very effective in evaporating sweat from our skin to keep us cool and comfortable when we exercise, and the moisture harvested from human sweat can be used to power wearable electronic devices such as watches, fitness trackers, and more.

Sweating is a natural process for our body to reduce thermal stress. "Sweat is mostly composed of water. When water is evaporated from the skin surface, it lowers the skin temperature and we feel cooler. In our new invention, we created a novel film that is extremely effective in evaporating sweat from our skin and then absorbing the moisture from sweat. We also take this one step further—by converting the moisture from sweat into energy that could be used to power small wearable devices," explained research team leader and assistant professor Tan Swee Ching, who is from the NUS Department of Material Science and Engineering.

The main components of the novel thin film are two hygroscopic chemicals—cobalt chloride and ethanolamine. Besides being extremely moisture-absorbent, this film can rapidly release water when exposed to sunlight, and it can be "regenerated" and reused for more than 100 times.

To make full use of the absorbed sweat, the NUS team has also designed a wearable energy harvesting device comprising eight electrochemical cells (ECs), using the novel film as the electrolyte. Each EC can generate about 0.57 volts of electricity upon absorbing moisture. The overall energy harvested by the device is sufficient to power a light-emitting diode. This proof-of-concept demonstration illustrates the potential of battery-less wearables powered using human sweat.

This technological breakthrough was reported in the September print issue of the scientific journal Nano Energy. 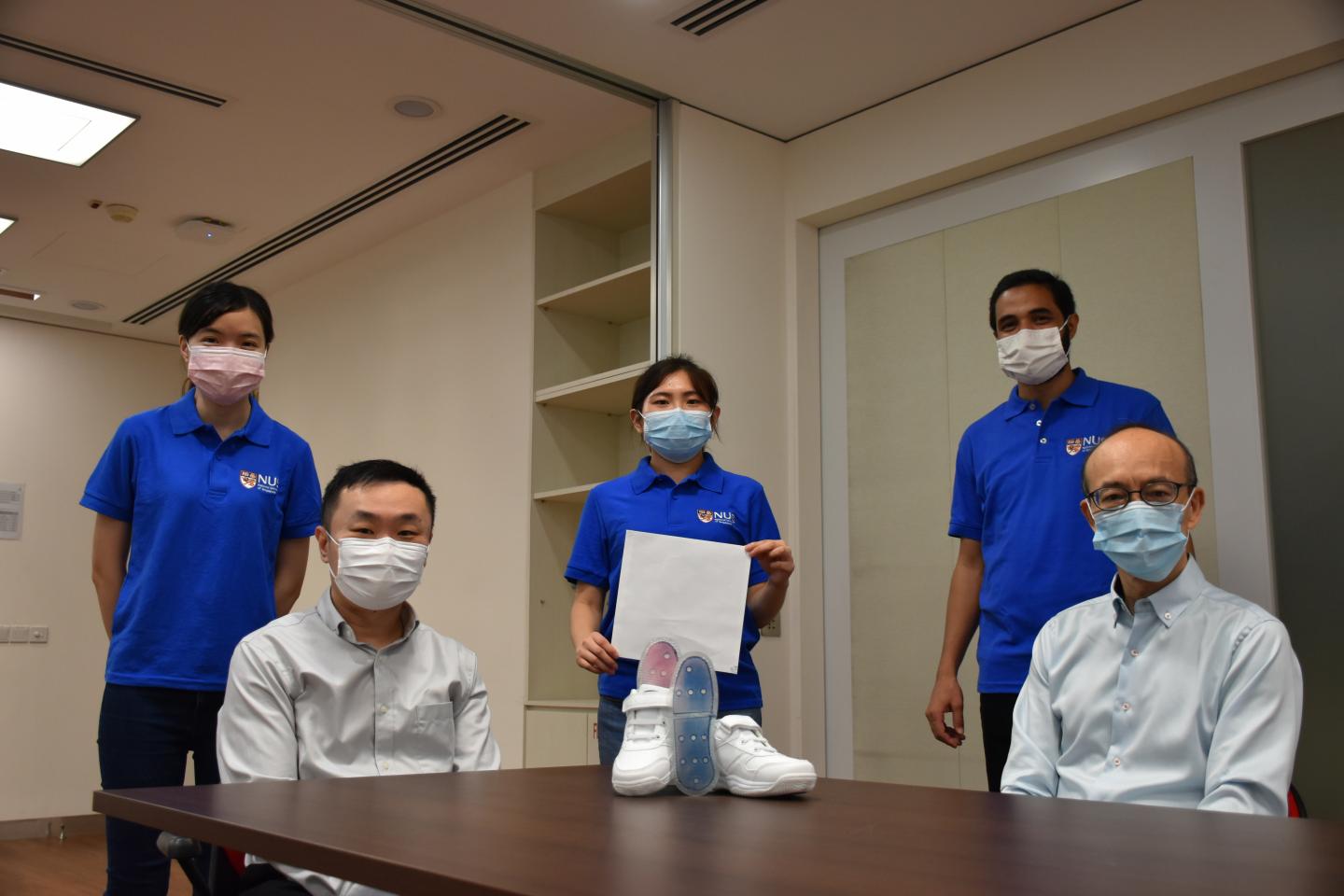 An NUS research team led by assistant professor Tan Swee Ching (seated, left) and professor Ding Jun (seated right) has developed a novel film that is extremely effective in evaporating sweat from our skin. Promising applications include shoe insoles and linings, as well as underarm pads for sweat absorption.
National University of Singapore

Conventional hygroscopic materials such as zeolites and silica gels have low water uptake and bulk solid structures, making them unsuitable for absorbing moisture from sweat evaporation. In comparison, the new moisture-absorbing film developed by NUS researchers takes in 15 times more moisture and do this 6 times faster than conventional materials.

In addition, this innovative film shows a color change upon absorbing moisture, from blue to purple, and finally pink. This feature can be used an indicator of the degree of moisture absorption.

The NUS team packaged the film into breathable and waterproof polytetrafluoroethylene (PTFE) membranes, which are flexible and commonly used in clothing, and successfully demonstrated the application of the moisture-absorption film for underarm pad, shoe lining and shoe insole.

Tan said, "Underarm sweating is embarrassing and frustrating, and this condition contributes to the growth of bacteria and leads to unpleasant body odor. Accumulation of perspiration in the shoes could give rise to health problems such as blisters, calluses, and fungal infections. Using the underarm pad, shoe lining and shoe insole embedded with the moisture-absorbing film, the moisture from sweat evaporation is rapidly taken in, preventing an accumulation of sweat and provides a dry and cool microclimate for personal comfort."

"The prototype for the shoe insole was created using 3D printing. The material used is a mixture of soft polymer and hard polymer, thus providing sufficient support and shock absorption," explained research team co-leader and professor Ding Jun, who is also from the NUS Department of Material Science and Engineering.

The NUS team now hopes to work with companies to incorporate the novel moisture-absorption film into consumer products.

- This press release was originally published on the NUS News website. It has been edited for style