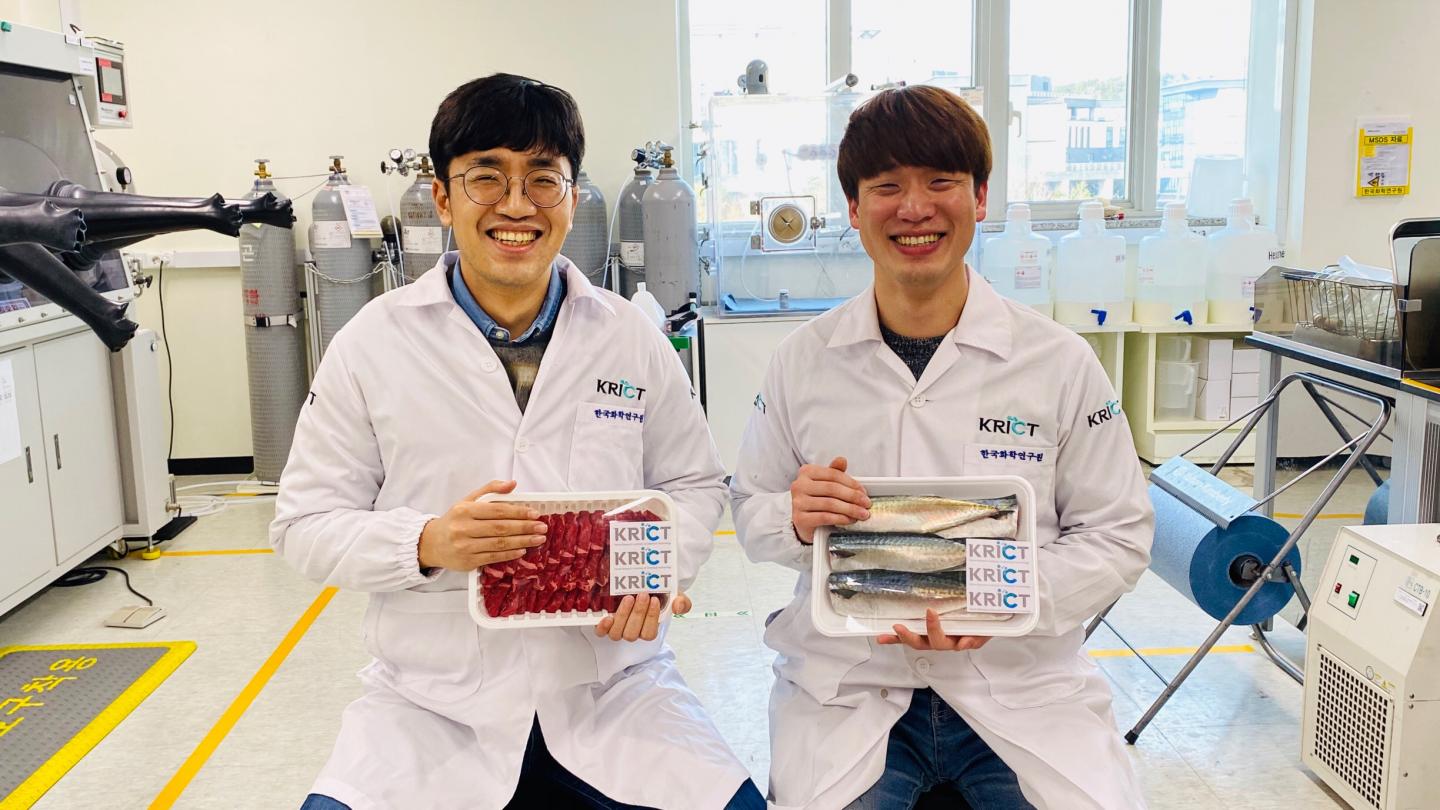 Can we tell with the naked eye if any cold-chain food products that we have received have gone bad?

A cold-chain safety sticker has been developed that indicates whether any cold-chain food products, such as fish, meat, and fruits and vegetables, have spoiled.

An image appears on the cold-chain safety sticker when it's exposed to room temperature (10°C or higher). Room temperature exposure history and time throughout the cold chain delivery process are indicated but cannot be manually edited.

In general, when refrigerated or frozen foods are exposed to room temperature, bacteria begin to grow and reproduce. However, it is difficult to discern if they have gone bad with the unaided eye. This is because certain bacteria do not affect the taste and smell of foods where they live, and frozen foods have almost the same appearance even after a cycle of melting and refreezing.

If this is the case, the cold-chain safety sticker will be able to prevent in advance the occurrence of food poisoning, hamburger disease, etc. which may occur when unknowingly eating spoiled foods resulting from the malfunction of refrigerator or freezer trucks.

Also, the cold-chain safety sticker is thin and flexible and its manufacturing cost is low. The technology is thus expected to have high potential for applications in the rapidly growing fresh food delivery market.

The core technology of the cold-chain safety sticker is its nanofiber film. The researchers attempted to attach a typical film on the back of this newly developed nanofiber film to fabricate this sticker.

At low temperatures, this nanofiber film has a stable structure where thin threads intersect each other and thus appears opaque because the light is scattered. However, when exposed to room temperature for a certain period of time, this nanofiber structure collapses. More specifically, these thin threads start to melt and become entangled with each other. This allows light to transmit through the film, thereby making it appear transparent.

Based on this mechanism, when the nanofiber film on the front surface of the sticker becomes transparent after being exposed to room temperature, the image produced on the typical film on the back becomes visible from the front. This change allows users to determine if their food products have spoiled.

Furthermore, the researchers found a way to control the time that is required for this nanofiber film to become transparent when exposed to room temperature. This was attempted based on the reasoning that the time needed before each food goes bad would vary.

The change of the readability of the sticker attached with nanofiber film after being exposed to room temperature.
Korea Research Institute of Chemical Technology (KRICT)

Thus, each sticker was designed to become transparent after a minimum of 30 minutes and a maximum of 24 hours of exposure to room temperature. This works in the same way as a timer does. This technique was realized by controlling the composition and thickness of the used nanofiber.

Oh, from the KRICT said, "This sticker, once exposed to room temperature, cannot be restored to its original state even if one attempts to refrigerate or freeze it again. Also, room-temperature exposure time cannot be manually adjusted. This means that there is virtually no room for any manipulation."

The cold-chain safety sticker can be widely used not only for food product applications but also for the cold-chain distribution of expensive medicine and medical supplies. This is because the sticker is thin and flexible, and its estimated manufacturing cost is low at one cent each.

Currently, one of the competing goods is a kit that indicates the room-temperature exposure history. It has been developed by global chemical companies to implement the cold-chain distribution of expensive medicine and medical supplies. This kit uses chemical reactions of special-purpose inks to indicate whether it has been exposed to room temperature.

However, it is made of thick plastic and is thus difficult to attach it to various objects, and its manufacturing costs several thousand won.

Choi, also from KRICT said, "Those existing kits used for the distribution of medicine and medical supplies involve a risk that the special ink contained in them may leak if they are damaged. In contrast, the developed cold-chain safety sticker is free from any risk of chemical leakage even if it is damaged during delivery. It will still function properly even after such damage."