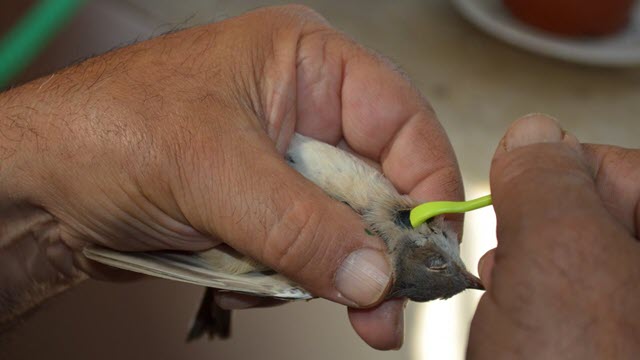 In a new study, researchers at Uppsala University and other institutions have identified genetic material from the recently identified Alkhurma hemorrhagic fever virus in the tick species Hyalomma rufipes. The discovery was made after thousands of ticks were collected from migratory birds captured in the Mediterranean basin. The results indicate that birds could contribute to spreading the virus to new geographical areas.

The Alkhurma virus (a.k.a Alkhumra) was first found in Saudi Arabia in the mid-1990s, in patients with typical hemorrhagic fever symptoms. The condition resembles diseases like Ebola but seems to be spread by contact with cattle and camels or from tick bites and not directly between humans. The knowledge about this relatively novel virus is still limited, and it is not known exactly which animals can act as hosts for the virus and which insects or tick species transmit the disease. Previous research has pointed to camels and other domestic livestock as potential carriers of the virus, and to one or several tick species possibly spreading the disease between mammals, including humans. The virus is a close relative to another tick-borne virus (Kyasanur Forest Disease virus) found in India. So far, the Alkhurma virus has only been seen on the Arabian Peninsula and in Egypt.

In a multi-national collaboration, researchers at Uppsala University have detected Alkhurma virus RNA in several ticks that were removed from birds migrating from Africa to Europe. The purpose of the study is to find out which tick-borne diseases that could potentially spread to new regions with migratory birds. Thousands of ticks were removed from migrating birds at seven different bird observatories in the Mediterranean basin.

"Our findings of the Alkhurma virus in ticks collected in Turkey and Greece are the first in the tick species Hyalomma rufipes, which is common in large parts of Africa and on the Arabian Peninsula. These findings mean that we have identified one more tick species that have carried RNA from this virus and shows that there is a risk of spread of the virus to new geographical areas," says Tove Hoffman, leader of the study and PhD student at the Department of Medical Sciences and the Zoonosis Science Center at Uppsala University.

A clearer understanding of the ecology of Alkhurma virus and continuing surveillance is important, both for populations in areas where it is already found as well as in regions in the Mediterranean basin, to where the virus could spread, since Alkhurma hemorrhagic fever is a potentially fatal disease and there is no effective treatment at present.

"We see that infectious diseases can spread to new geographical areas and that is why it is necessary to understand the role of different animal species in the dynamics of these diseases," says Tove Hoffman.