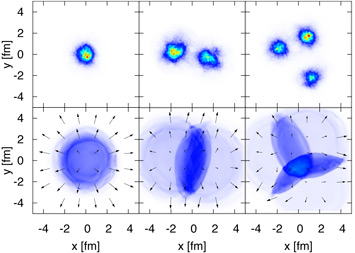 The upper panel of this image represents initial hot spots created by collisions of one, two, and three-particle ions with heavy nuclei. The lower panel shows the geometrical patterns of particle flow that would be expected if the small-particle collisions are creating tiny hot spots of quark-gluon plasma.Image courtesy of Brookhaven National LaboratoryUPTON, NY — The Relativistic Heavy Ion Collider (RHIC), a particle collider for nuclear physics research at the U.S. Department of Energy's (DOE) Brookhaven National Laboratory, smashes large nuclei together at close to the speed of light to recreate the primordial soup of fundamental particles that existed in the very early universe. Experiments at RHIC—a DOE Office of Science User Facility that attracts more than 1,000 collaborators from around the world—have shown that this primordial soup, known as quark-gluon plasma (QGP), flows like a nearly friction free "perfect" liquid. New RHIC data just accepted for publication in the journal Physical Review Letters now confirm earlier suspicions that collisions of much smaller particles can also create droplets of this free-flowing primordial soup, albeit on a much smaller scale, when they collide with the large nuclei.

"These tiny droplets of quark-gluon plasma were at first an intriguing surprise," said Berndt Mueller, Associate Laboratory Director for Nuclear and Particle Physics at Brookhaven. "Physicists initially thought that only the nuclei of large atoms such as gold would have enough matter and energy to set free the quark and gluon building blocks that make up protons and neutrons. But the flow patterns detected by RHIC's PHENIX collaboration in collisions of helium-3 nuclei with gold ions now confirm that these smaller particles are creating tiny samples of perfect liquid QGP."

These results build on earlier findings from collisions of two-particle ions known as deuterons with gold ions at RHIC, as well as proton-lead and proton-proton collisions at Europe's Large Hadron Collider (LHC). They also set the stage for the current run colliding protons with gold at RHIC.

"The idea that collisions of small particles with larger nuclei might create minute droplets of primordial quark-gluon plasma has guided a series of experiments to test this idea and alternative explanations, and stimulated a rich debate about the implications of these findings," said University of Colorado physicist Jamie Nagle, a co-spokesperson of the PHENIX collaboration at RHIC. "These experiments are revealing the key elements required for creating quark-gluon plasma and could also offer insight into the initial state characteristics of the colliding particles." 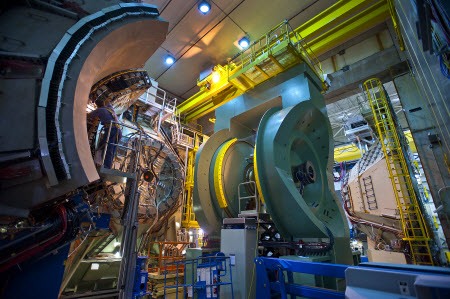 Relativistic Heavy Ion Collider's PHENIX detector.Photo courtesy of Brookhaven National LaboratoryThe discovery of the "perfect" liquid at RHIC, announced definitively in 2005, was largely based on observations of particles flowing in an elliptical pattern from the matter created in RHIC's most energetic gold-gold collisions. This flow was a clear sign that particles emerging from the collisions were behaving in a correlated, or collective, way that contrasted dramatically with the uniformly expanding gas the scientists had expected. Additional experiments confirmed that this liquid is indeed composed of visible matter's most fundamental building blocks, quarks and gluons, no longer confined within individual protons and neutrons, and that the flow occurs with minimal resistance—making it a nearly "perfect" liquid QGP.

"Experiments colliding smaller particles with the heavy ions were originally designed as control experiments because they weren't supposed to create the QGP," Nagle said. "But observations at the LHC of very energetic proton-proton collisions and later experiments there colliding protons with lead revealed hints that particles streaming from those tiny collisions were also behaving collectively and flowing. It looked a lot like some of the perfect liquid signatures originally discovered in gold-gold collisions at RHIC, and later in lead-lead collisions at the LHC."

When RHIC physicists checked data from the RHIC run of 2008, when deuterons (a nucleus made of one proton and one neutron) were smashed into gold ions, they saw a similar pattern.

"Since the deuteron is two particles, it creates two separate impacts on the nucleus—two hot spots that appear to merge and form an elongated drop of QGP," Nagle said.

Those observations triggered the idea of testing for flow patterns in a range of more tightly controlled experiments, which is only possible at RHIC, where physicists can collide a wide variety of ions to control the shape of the droplets of matter created. With additional deuteron-gold collisions already in hand, the RHIC scientists set out to collide three-particle helium-3 nuclei (each made of two protons and one neutron) with gold—and later, single protons with gold.

"The PHENIX detector can pick up particles coming out of collisions very far forward and backward from the collision point. This large angle coverage allows us to measure the flow in these small collision systems," said Shengli Huang, a PHENIX collaborator from Vanderbilt University who carried out the analysis. "PHENIX also has a trigger detector that picks up and records the most violent collisions—the ones in which the flow pattern is most apparent," he said.

The analysis of those events, as described in the new paper, reveals that the helium-gold collisions exhibit a triangular pattern of flow that the scientists say is consistent with the creation of three tiny droplets of QGP. They also say the data indicate that these small particle collisions could be producing the extreme temperatures required to free quarks and gluons—albeit at a much smaller, more localized scale than in the relatively big domains of QGP created in collisions of two heavy ions.

"This is a pretty definitive measurement," Nagle said. "The paper has a plot of elliptical and triangular flow that pretty much matches the hydrodynamic flow calculations we'd expect for QGP. We are really engineering different shapes of the QGP to manipulate it and see how it behaves."

There are other key signatures of QGP formation, such as the stopping of energetic particle jets, which have not been detected in the tiny droplets. And other theoretical explanations suggest the flow patterns resulting from some of the small particle-nucleus collisions could emerge from the interactions of gluons within the colliding particles, rather than from the formation of QGP.

"At this time, the only theoretical framework that reproduces the patterns we're observing in deuteron-gold and helium-3-gold collisions is fluid dynamics," said Bjoern Schenke, a nuclear theorist at Brookhaven Lab. "It remains to be seen if alternative models can describe these patterns as well."

If other models also turn out to be compatible with the helium-3-gold data, physicists will want to explore whether these models make predictions that differ from those of the hydrodynamic flow model, and for which types of collisions.

"The good news is that RHIC, with its unrivaled versatility, will likely be able to study any system that can discriminate between different models," Mueller said.

Research at RHIC is funded primarily by the DOE Office of Science and also by these agencies and organizations.