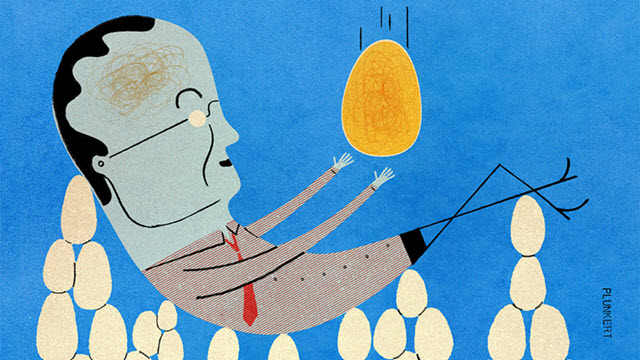 There is an effective formula for unlocking employees’ creative potential, according to new research from the McCombs School of Business at The University of Texas at Austin and the Gies College of Business at the University of Illinois at Urbana-Champaign. Employers should incentivize workers to produce an abundance of ideas—even mediocre ones—and then have them step away from the project for an “incubation period.”

The researchers found that people who were rewarded simply for churning out ideas, whether good or bad, ultimately ended up producing more creative ideas than people who did not receive pay incentives or those whose pay incentives were based on the quality of their ideas instead of the quantity. All the study participants stepped away from the initial task for a time and returned to it later.

“Creativity is not instantaneous, but if incentives promote enough ideas as seeds for thought, creativity eventually emerges,” said Steven Kachelmeier, the Randal B. McDonald Chair in Accounting at Texas McCombs and co-author of the study in the Accounting Review.

It has been well established in the academic literature that creative performance is enhanced by an incubation period, but this research looked at a new question: What happens when you add incentives for idea generation to the equation?

Kachelmeier and his co-authors, Laura Wang (McCombs BBA/MPA ’05, PhD ’14) and Michael Williamson, of the University of Illinois, conducted two experiments. In the first, they asked study participants to create rebus puzzles—riddles where words, phrases, or sayings are represented using a combination of images and letters.

Some participants were offered pay based on the number of ideas they generated, some only for ideas that met a standard for creativity, and others a fixed wage of $25, regardless of the quantity or quality of their puzzle ideas.

Initially, none of the incentivized groups outperformed the fixed-wage group in measures of creativity, as judged by an independent panel. Creativity incentives, it would seem, do not work instantly. But in a subsequent return to the creativity task 10 days later, those who had originally been paid to come up with as many ideas as they could had “a distinct creativity advantage,” outperforming the other groups in both the quantity and quality of ideas, Kachelmeier said.

Having an incubation period after participants put their minds to work was key to their success, the researchers said. Combining mass idea generation with a rest period results in much more creative productivity than when either of the two strategies is used in isolation.

How much time is needed? That’s the question the researchers tackled in a second experiment, paying half the participants a fixed amount and half for the number of ideas they produced. As before, the pay-for-quantity participants yielded more, but not better, initial ideas than the fixed-pay group.

But after researchers led participants on a quiet, 20-minute walk around campus, the pay-for-quantity group once again produced more and better puzzles.

“You need to rest, take a break and detach yourself—even if that detachment is just 20 minutes,” Kachelmeier said. “The recipe for creativity is try—and get frustrated because it’s not going to happen. Relax, sit back, and then it happens.”

“Incentivizing the Creative Process: From Initial Quantity to Eventual Creativity,” by Steven J. Kachelmeier, Laura W. Wang and Michael G. Williamson is published in the March 2019 issue of the Accounting Review.

New Research 'Sniffs Out' How Associative Memories Are Formed

New Research 'Sniffs Out' How Associative Memories Are Formed